Is Germany still exporting arms to countries involved in Yemen?

I have recently been in Berlin and caught a glimpse of a more unusual protest: 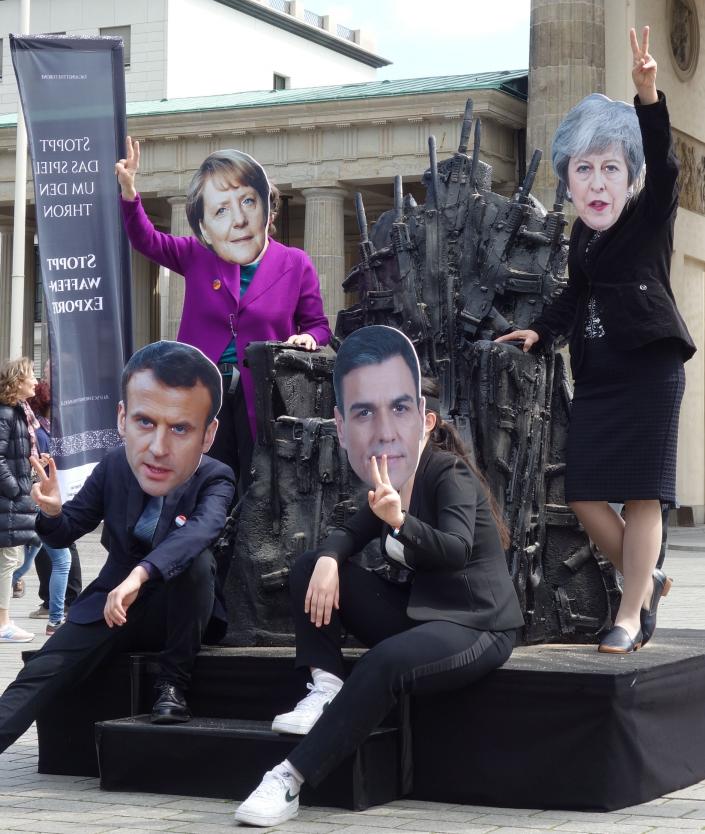 I cannot understand German, but based on the setup (Iron throne with rifles instead of swords) it was clearly related to some arms policy that involves Germany, UK, France and Spain.

This article provides more information about the protest:

However, according to this article there seem to be a consensus in Germany to suspend such exports:

In Germany, the coalition agreement between the CDU/CSU and the SPD adopted in February 2018 indicated that, under the new government, Germany would not licence any more arms sales to the coalition states.

In short: it's murky.

In theory the answer is no -- there are no more arms sales to parties involved in the conflict:

Conflicts abroad have also spurred Germany to prohibit or put a freeze on the sale of arms. In November 2018, the German government stopped all arms exports to Saudi Arabia as a reaction to the killing of the government-critical Saudi journalist Jamal Khashoggi.

At the end of 2018, German chancellor Angela Merkel signed an agreement forbidding the sale of weapons to any country directly involved with the war in Yemen.

To clarify that last paragraph, and why I failed to locate a list of affected countries, Martin Schröder in the comments provides a helpful piece of information:

The German government has been repeatably asked for a list [of which countries and groups are affected by the extended ban] by the press and refused to answer; they are still discussing it internally. [as of May 12 2019]

This caused a sharp drop in arms exports and even economic issues at home.

In practice, Germany appears to continue to sell arms to Riyadh indirectly:

an investigation by the Stern magazine together with the ARD broadcaster has revealed that the German arms company Rheinmetall has been selling weapons to Riyadh through its subsidiaries in Italy and South Africa despite the complete halt in exports ordered by the German chancellor after the murder of dissident Saudi journalist in Istanbul.

A month ago, Merkel also explained that Germany participates in programs with France and the UK, which continue to supply arms to the Saudis.

The German government likes to deny that such deals happen, at the same time that they are approved by the government via its security council only after strict investigation, and it even goes to lengths to publish decisions that sound like an embargo to weapons or other military equipment (grouped into the same category as weapons).

The reality, however, is quite different.

"Individual licences for the export of military equipment to the countries in question in the period from 14 March 2018 to 13 March 2019." src: Schriftliche Frage an die Bundesregierung im Monat März 2019 Fragen Nr. 226 (PDF)

And it doesn't stop.

Not the answer you're looking for? Browse other questions tagged germany protests weapons yemen .

3
Why do policemen in Germany still carry lethal firearms instead of non-lethal ones?
15
How can Germany increase investments in Russia while EU economic sanctions against Russia are still in place?
1
Is Qatar still backing any sides in the Yemen conflict?
7
Why are US nukes still stationed in Germany for use by German pilots and not French ones?