How to review the decision-making of the different functions of the European Union?

When I was yesterday doing research around How long does it take, before the details of an EU parliament decision get published? I figured, that I had some conceptional misunderstanding of how the EU is actually running their business.

I checked their website to try to get an better idea of this, but the general information are quite... superficial. So no real insights and no clue where to start digging for deeper information.

So I am asking here now, what are the different functions the EU exerts, to settle laws, rule regulations and decide other things I might not be aware of. And especially, what options do I have to review the decisions having been made in their different functionality and how individuals decided in such regards?

european-union transparency
Share
Improve this question
edited May 16, 2019 at 8:05

TLDR: Decision making in EU is generally done with the following steps:

1) The European Commission conceptualizes legislation and make a proposal to parliament and council.

2) The EU parliament does two things:

-----2.a) It puts its committees to examine, amend, and vote (committee meetings votes), and the committees build a report and put's it on for voting in the whole EU parliament.

3) This can go back and forth between parliament, commission, and council but once everyone agrees (it might take a while), the proposal (potentially amended) is transposed to all EU citizens (which in turn requires a new turn of EU national parliaments vs. government discussion on how to implement the new legislation at a national level).

NOTE: Before stating the relevant facts regarding your question I would recommend watching (and reading) the video articles about The work of MEPs and Backstage of a plenary to have an idea of the typical functions for an MEP. These take two minutes and can make the whole picture much clearer.

You can see the legislative procedure in the following figure which you'll find in the document A Quick Look at Parliamentary Committees: 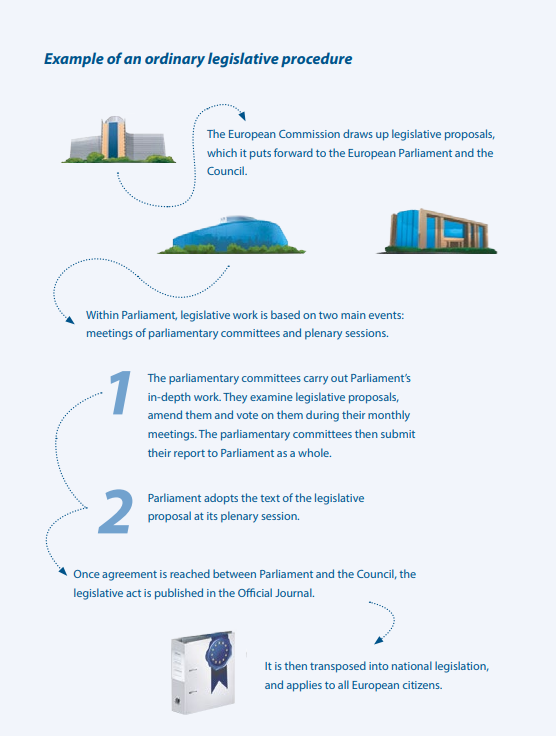 You will notice that the very first step is done by the EU Commission, meaning that this institution is the only one (at this point at least) with true legislative initiative. In practice things are a bit different. The EU parliament has something called the Right of Initiative which means that it always needs to ask the Commission to put forward a proposal (instead of skipping this step and propose one on its own volition):

The Maastricht Treaty gave Parliament the right of legislative initiative, but it was limited to asking the Commission to put forward a proposal. This right was maintained in the Lisbon Treaty (Article 225 TFEU), and it is spelled out in more detail in an interinstitutional agreement between Parliament and the Commission.

Typically a national parliament has legislative initiative but I assume this might prove problematic for more euro-skeptic members. As so, as it stands the EU parliament has only indirect initiative at the moment. And it's not clear if there are true limits for this method:

Whilst this 'indirect' initiative right does not create an obligation on the Commission to propose the legislation requested, the Treaty of Lisbon codified the Commission's obligation to provide reasons for any refusal to follow a parliamentary initiative. Many argue in this context that Parliament could take the Commission to the Court of Justice of the EU if it fails to justify a negative decision.

Moving on it's important to notice that the EU parliament is composed of several committees, each composed of different MEPs. So, it's quite normal to have parliament sessions that occur at the same time (but for different committees). 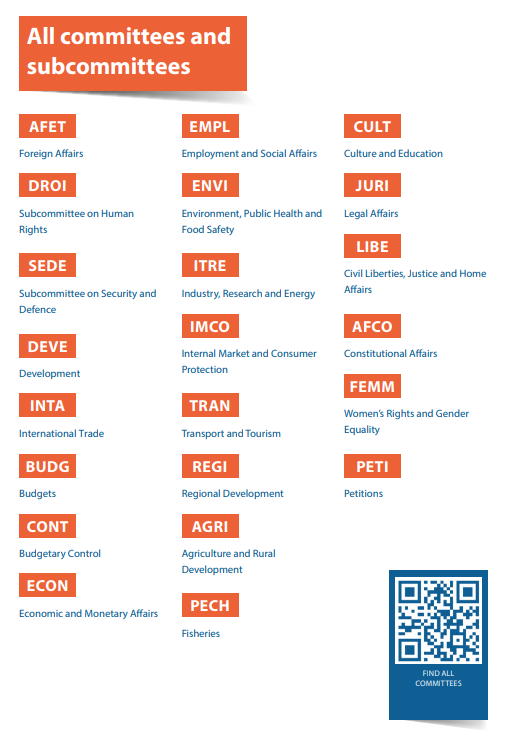 These work committees (each a mini-parliament) make amends and prepare reports for the whole parliament. Their functions can be summarized in:

These committees instruct legislative proposals through the adoption of reports, propose amendments to Plenary and appoint a negotiation team to conduct negotiations with the Council on EU legislation. They also adopt own-initiative reports, organise hearings with experts and scrutinise the other EU bodies and institutions.

For more about committees see article Who calls the shots in the committees of the new European Parliament? (Piedrafita, 2014).

You should know that the Commission itself has it's own mechanisms for studying a potential proposal (see also the article for Impact Assessment):

Before the Commission proposes new initiatives it assesses the potential economic, social and environmental consequences that they may have. It does this by preparing 'Impact assessments' which set out the advantages and disadvantages of possible policy options.

Final notes: There are special circumstances for particular themes such as budget. For more on this see question Is it customary for European Union to debate multiannual budget before agreeing on the grand strategy for the next 10 years?.

EDIT: There are several official sources to analyze and review the proceedings from each of the EU institutions. Regarding decision-making here are some:

If you wish to see the current legal texts I recommend EUR-Lex, the European Union law portal. Furthermore each of these institutions has mechanisms dealing with external communication, notably:

Moreover there are presences in well know social media. I won't describe all (I don't know them all) but here are a few:

I further recommend looking on their Featured Channels (right side on their creator page) since there's a bunch of other channels dealing with particular subjects in the union (EU Tax and Customs, EU Science and Innovation, EU Security and Defence, European Central Bank, etc.).

Finally If you are looking at independent media you might want to consider the several agencies specialized in European themes:

Not the answer you're looking for? Browse other questions tagged european-union transparency .

2
Is it customary for European Union to debate multiannual budget before agreeing on the grand strategy for the next 10 years?
2
Understanding the decision process in politics - How much knowledge does a politician need?
2
How long does it take, before the details of an EU parliament decision get published?