What can the U.S. do politically if China decided to stop exporting rare earth metals to the U.S.?

China has recently threatened to ban export of rare earth metal to the US. What can the US do to retaliate against such a move politically? Is there anything the U.S. can do that could hurt China as much? Also, is there any perhaps less aggressive move the U.S. could use in order to retaliate or prevent China from doing such a thing?

What can the U.S. do politically if China decided to stop exporting rare earth metals to the U.S.?

Sensible actions seem to be:

I left this as a comment on a similar question (but specifically about Nato):

Such materials aren't particularly rare in terms of distribution around the planet - they are 'just' costly (economically and environmentally) to produce. Decades ago the USA had a virtual monopoly on supply. It lost that monopoly to China which could do it much cheaper. If China makes rare earth materials more expensive or stops supply altogether, other countries will find production more economic and/or they will use different materials. As happened during the China rare earth embargo in 2010.

As this question was phrased, what could the US do to hurt China in response, they could do almost anything to escalate the trade war. Of course, there's a measure of self-hurt in trade wars as well.

But the US has already taken (protectionist) steps to reduce its dependence on Chinese raw or finished imports using rare earths, at least in the military sector:

The new legislation, more commonly known as the 2019 National Defense Authorization Act, prohibits the U.S. Department of Defense from acquiring rare earth magnets – along with certain tungsten, tantalum and molybdenum products – from China, Russia, Iran, and North Korea. “This is a turning point in the re-establishment of an independent US rare earth industry,” said Ucore President and CEO Jim McKenzie. “It is also an important inflection point for rare earth investors. Rare earth magnets, or REMs, represent a technology of critical importance to the American military.”

More of the same could follow, whether or not China cuts its exports to the US.

Following the 2009-2010 disruption in Chinese rare earth exports, the USGS has conducted a survey of US rare earths deposits, and found them to be substantial. If cost were no objection, the US could easily exploit these. (And related to that, Japan has even conducted underwater prospecting finding vast reserves in their waters.)

As an aside, China lost a WTO case on their rare-earth export restrictions in 2014-2015 (the complaints were from the US, EU, Japan (DS431-DS433) and Canada also joined consultations.) But short-term, surely there could be price disruption from a Chinese restrictive measure, as there was not so long ago: 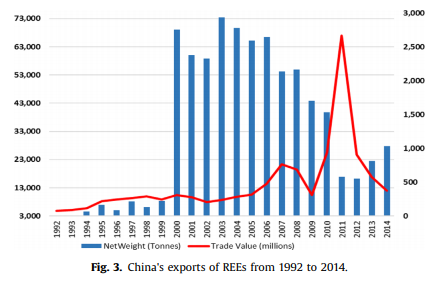 Globally however there has already been a reduction on dependency from China since then: 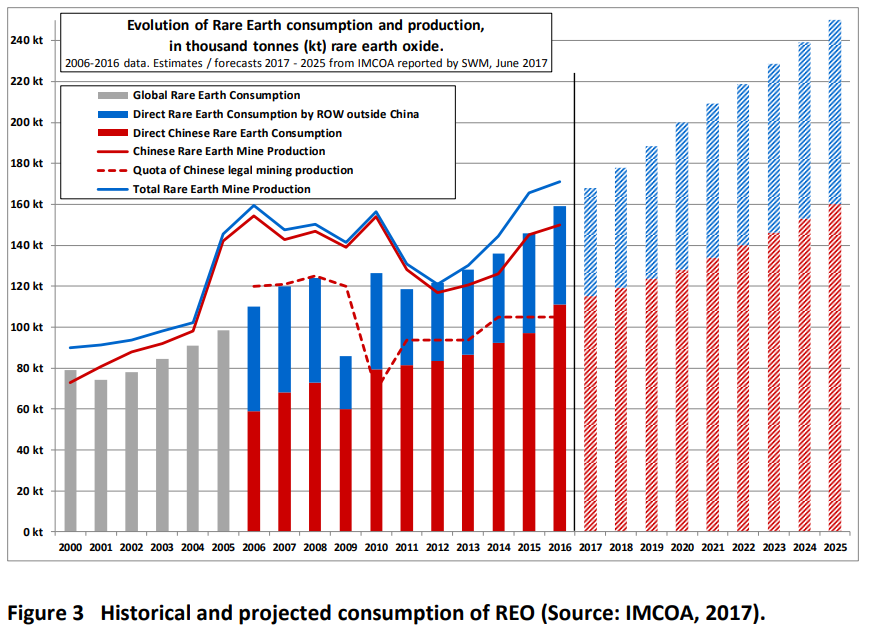 16
Does any present legislation practice exile as a regular sentence?
6
What interest does China have in U.S. debt?
6
How many treaties ratified by Congress did the US exit unilaterally?
1
Can the United States force multinational companies from not owning Chinese assets?
2
Quickly prevent POTUS from initiating military or nuclear operations?
0
What mechanisms or international laws give the U.S. the power to extend its jurisdiction beyond its border as long as the criminals use SWIFT?