How does the EU Emissions Trading Scheme account for increased emissions outside the EU?

If a third country (say China) is not beholden to the same emissions trading scheme, market forces should push steel production into the countries where costly emissions credits are not needed and production is cheaper.

If this happens, the European Union Emissions Trading Scheme would punish EU steel producers for little to no overall environmental benefit.

Are the proponents of this scheme concerned about such a possibility? Are there policy proposals to mitigate such effects?

You are not the only one to argue that only a group of countries adopting carbon taxes might not work in long run. Here's an extended comment on that:

These international negotiations have so far failed to deliver any more than ‘roadmaps for agreement’. There are now at least three ways to proceed for countries or regions aspiring to leadership, such as the EU:

(ii) accept that the current regime leaves little chance of achieving the 2 degrees C temperature target, and extend exemptions from domestic carbon prices (e.g. the free allocations in the EU ETS and Australian Carbon Price Mechanism) and other implicit subsidies to the export sector to protect domestic industry as the world warms; or

(iii) apply BCAs to countries that have not taken ‘equivalent measures’ to internalize the carbon externality.

The current EU approach is largely focused on protecting its own industries from carbon leaking through an extensive CLL (carbon leakage list), which provides 100% free allowances for the sectors on it; and this list is pretty extensive... 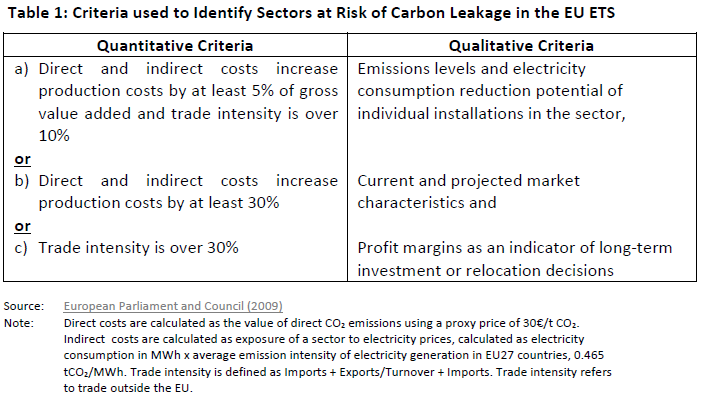 (And since you mentioned it, steel production in on the current CLL. For the current ETS troubles of UK steel manufacturers see this more specific question; it's Brexit related.)

The last measure mentioned in the first source (Border Carbon Adjustment tax) is certainly more controversial and hasn't been adopted insofar as far as I know. It also goes by some different names such as "Border Tax Adjustments (BTAs)",

John Hontelez, secretary general of the European Environmental Bureau (a federation of 140 environmental organizations based largely in European Union member states), made similar points in a widely-circulated piece from April 2007, "Time to tax the carbon dodgers". He wrote:

Border Tax Adjustments (BTAs) might be the answer which allows the EU to develop responsible climate policies without having to wait for other countries. They would result in products imported from the US being taxed to compensate for resulting differences in production costs. Thus EU firms would be protected against unfair, carbon-careless competition from outside.

The EU seems reluctant to start a trade war with... well most countries on this... including China, India, and the US (over there, there are some state-level schemes, but not federal ones.)

It looks like the French favor such a border carbon tax but the Germans and Nordics do not.

Already defended by former French Presidents Sarkozy and Hollande, the idea of a carbon tax at the EU’s borders is typically French and has ended up convincing almost everyone. [...]

But a lot needs to be done to convince European partners of a ‘green protectionism’ with a French touch. In Germany, the conservative Union of CDU and CSU expressed their opposition to a national carbon tax, defending the reform of the European carbon market instead.

Sweden also appears viscerally attached to free trade, as even its representatives from the Green party refuse to introduce obstacles on the all-powerful market.

Not surprisingly, Germany has a large export sector, most likely to be hit by retaliations in a trade war...

There's actually a 2015 (French) paper that tried to estimate the impact of EU BCAs and thus retaliations it could face. In the worst case (if EU taxed indirect emissions), China, Russia and the US would all have retaliated with 2-2.5 bn dollars each, and India with around 1 bn. Most of these retaliations would have likely hit the EU agrifood business in their opinion (this was a pre-Trump paper, so German cars etc. were not on the map then.)

There's also an official answer from the Commission in response to a MEP inquiry, in 2017

On the contrary, the design and implementation of a carbon border tax would be extremely complex, with high administrative burden, raising issues with regard to the compatibility with the rules of the World Trade Organisation. Consumption-based accounting of emissions, including non-EU products, raises large technical challenges at this stage.

Some Commission-affiliated economists have actually published a longer analysis of possible BCAs, which mostly echoes the Commission's skepticism, but this paper also found that some simplified variants may be feasible, e.g. using data only on sectoral emission by region. (Interestingly, they had a Spanish but not a direct EU grant to study this.)

Under the initial scope, the ETS will cover 3.5 billion tonnes of carbon dioxide from 1700 installations, accounting for over a third of China’s total carbon emissions. This means that China will overtake the EU, which covers 1.4 billion tonnes, as the world’s largest carbon market.

Many details about the Chinese ETS are yet to be decided and announced. This includes the initial level of the emissions cap and its planned trajectory over time.

Given the list of pending tasks, it is not yet known when trading will begin. Experts expect the set-up of the ETS to take at least one year, with 2020 likely to mark the launch of actual trading and broader sectoral coverage. This would coincide with the publication of China’s next Five-Year Plan and the submission of its new climate pledge under the Paris Agreement.

Once fully implemented, the Chinese ETS is expected to cover around five billion metric tonnes of carbon dioxide. According to a report by the International Carbon Action Partnership (ICAP), this means that 15 percent of total global emissions will be covered by carbon markets. Experts argue that China’s national ETS can spur wider climate action around the world.

So its effectiveness remains to be seen. Insofar there are some concerns that China is not releasing enough company-level data to allow for independent verification of the effects of their carbon policies. The Chinese only allow select[ed] people to receive this data, unlike the public disclosures in the EU, for instance.

But (for now) the initiation of the Chinese ETS bolsters the claim that leading by example (as the EU has done) is better than imposing border carbon taxes.

The thinking behind Emissions Trading Schemes is that you impose a cost on pollution and reward efficiency in order to stimulate innovation and reduction of emissions. The amount of emission credits allocated in total can be changed (mostly reduced) in the future to push emission prices to a point that makes investments in cleaner technology worthwhile without bankrupting whole sectors.

The increased price of an energy/emissions-intensive product like steel can and should be compensated with import tariffs on the same product from countries that do not participate in a similar scheme.

That doesn't prevent problems with exports to third party countries, where the cheaper steel will be more competitive. This can't be prevented totally without a global emissions trading scheme, but in the current scheme countries can give out extra allowances to industries to prevent this.

Not the answer you're looking for? Browse other questions tagged european-union economy trade environmental-policy climate-change .

11
Why did British Steel have to borrow 120 million pounds (from the government) to cover its ETS obligations?

4
How many people work for the EU?
2
How does Brexit affect trade between the UK and countries outside of the EU?
4
Is the UK asking for increased influence over the EU post-Brexit?
14
Has Britain negotiated with any other countries outside the EU in preparation for the exit?
2
Does the US account for inter-generational equity/imbalances when producing fiscal policy?
3
Which sources of CO2 emissions are currently considered for The European Union Emissions Trading System?
13
How does the EU or any country with carbon emission permits enforce emissions from companies?
2
How do businesses operating in multiple countries in the EU account for different tax rates in different countries?
2
How high is the EU-ETS cap for Germany in 2021?