Have any of the "hard Brexit" Tories who voted against May's Withdrawal Agreement in late March stepped forward to be PM?

Both Dominic Raab and Boris Johnson voted for May's Withdrawal Agreement (WA) on March 29 (after voting against on March 12.)

Did any of the "true hard" Brexiteers in the sense that they preferred a no-deal Brexit to the WA and voted against May's deal even on the 29th, put himself forward for the Conservative party leadership (and implicitly premiership) now that May has resigned?

Basically I'm looking for those Tories who meet the following three conditions simultaneously:

united-kingdom conservative-party
Share
Improve this question
edited May 27 '19 at 12:05

No. The following people have declared to stand:

Based on the voting record on the United Kingdom's withdrawal from the European Union on the 29th of March 2019, we see none of the candidates above voted against this bill.

The aforementioned BBC article lists a number of people who are tipped to stand. Of those, the following people did vote against the bill as shown in the link:

The BBC article has since been updated with a graph on how MPs voted: 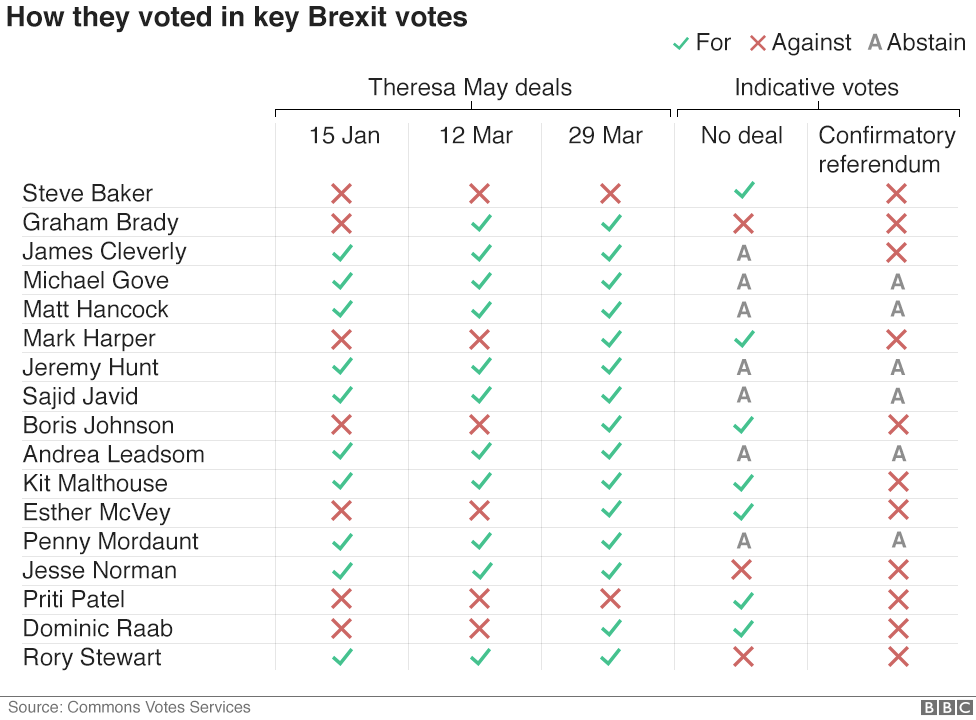 Not the answer you're looking for? Browse other questions tagged united-kingdom conservative-party .

32
Why doesn't Theresa May sack hard-Brexiteers from cabinet?
11
Have any MPs ever voted against their own government in a no confidence vote?
18
What will happen if Parliament votes "no" on each of the Brexit-related votes to be held on the 12th, 13th and 14th of March?
1
Of the 34 Conservatives who voted against the Withdrawal Agreement last time, how many are remainers?
0
Why is Andrea Leadsom so unpopular in the 2019 Conservative leadership contest?
10
According to UK government, Parliament cannot stop a no-deal Brexit: Could this also be used to push through the agreement agreed by Theresa May?
4
Have any UK parties suggested uniting to neutralize the Brexit party by preventing a GE before 2022?
18
What power does the UK parliament hold over a Prime Minister whom they refuse to remove from power?
2
Can the UK make a no-deal "real Brexit" next year, even if the Johnson-EU deal is approved (by all involved)?
6
Which Tory MPs have called for Dominic Cummings' resignation?