Why is the voter turnout at EU level so low compared to national elections?

The voter turnout in the European elections in Germany in 2019 for instance was only around 62%. Notable this is still much higher than it was in previous EU elections there…

Additionally the voter turnout in the whole EU decreased before as this question shows and it has now risen to (at least) 50.5% in 2019 across the whole EU.

However, e.g. the German federal elections 2017 had a much higher turnout of 76.2%. Similarly in other states and years. (e.g. the UK turnout for European election has always been about 30% in contrast to around 60% at the UK general election in 2015.)

So what are the (main) reasons for this?

The previously linked other Stackexchange question already indicated some indicators, but maybe we can get a more fundamental answer here. Maybe there are even some scientific studies or so on that topic or it has been analyzed in detail somewhere?

So to summarize the question (TL;DR): It had been shown that voter turnout at national level usually was and is lower than at EU level. What is the reason for this?

Yes there are quite a few such papers analyzing the reasons. The general idea is that EU elections are "second order", i.e. less is at stake than in "first order" elections which decide who is in power (in major offices).

Second-order elections are not limited to supranational ones, like the EU elections. Midterms in the US are also an example; participation there is also lower than in presidential elections. Likewise for the German (equivalent) Landtagswahlen.

In addition to lower participation, some additional characteristics are posited for second-order elections:

The latter two are because such second-order elections often become a protest vote (against the government and also against "the system"). For empirical data on these party-size aspects see a related question.

To come back to the issue of participation, a paper evaluating the supposedly more-important-than-ever 2014 EU election (Eurozone crisis etc.) found that it still mostly did not buck the trend:

one of the most fundamental assumptions of the second-order elections model is that participation is lower compared to first-order elections, since politicisation and electoral mobilisation is deficient. In order to test this expectation against reality, we compare turnout levels in the EP2014 election with those in the preceding first-order national election (FOE). Figure 1 shows the results of this analysis. 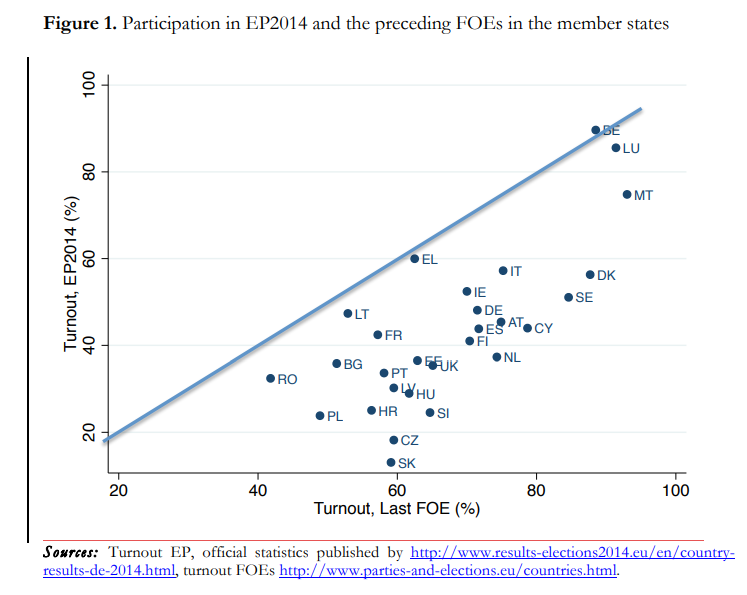 We find that participation in the 2014 election of the members of the European Parliament is generally lower than it was in the preceding FOEs (with the exception of Belgium). Belgium and Luxembourg are organising general elections under a compulsory voting regime, which is applied in Luxembourg only for citizens under 75 years of age. This is why participation in these two countries is about as high as it was in the previous national election. In addition, Belgium ran simultaneously first order elections and provincial elections in addition to the election of the members of the European Parliament; strangely enough, the recorded participation rate for Belgian EP elections is almost 90 per cent, while it is 88.5 for the simultaneous national election. Belgium is indeed the only country with a somewhat higher turnout rate in the EP election. Another country that does not really meet our expectations is Greece where electoral participation was very close (only 2.5 per cent difference) to the level of previous election of the members of the national parliament. As Greece is one of the hardest hit countries in the current financial crisis, we might see this as an indication that the crisis has contributed to electoral mobilisation there (and probably elsewhere too).

Interestly, for this election they also found (using a regression model) that:

the public debt (measured as a proportion of the national GDP) does significantly affect the 2014 EP turnout, even if controlled for the previous national turnout rate. We find that turnout slightly increases with increasing public debt.

So countries whose citizens' had more to worry about in terms of decision from the EU regarding their finances, apparently turned up to vote in larger numbers.

This paper also found that the other two effects (on who loses) also mostly held in the EP2014 elections.

Fizz' answer covers what a second order election is very well. Much like they do with local elections, voters tend to use their EU vote to send a message to their national politicians in some form or shape. The best illustration of this probably is the Brexit party in the UK this year, which won the EU election without a shred of a policy manifesto. (See them getting called out for it by @ByDonkeys.)

This answer, however, doesn't strike me as complete without raising why voters don't think that voting on the question (or indeed, at all) is important. The short answer is that EU citizens don't know how EU institutions work and in what ways what they're voting for matters.

If you ask random people in the street in the US, I'd surmise that most will at least have some vague notion of how bills hover between the White House and Congress. Try the same in Europe and most people you speak to will have no idea of how the process works at the EU level, what the EU can and cannot vote on, and for that matter what their own MPs are up to most of the time in practice (which is to say, vote on bills derived from EU directives that were decided at the EU level).

The blame for this is shared at at least three levels.

At the institutional level, the EU itself changes every so many years, and the civics curriculum is, in my opinion, underwhelming. The EU I was taught about as an afterthought during my childhood and early adulthood changed a lot, and it continued to change to this day. Civics classes -- when there are any -- simply aren't enough to drive the EU's importance across.

At the media organization level, there is a scathing case to be made that news outfits are, at best, not covering the EU enough, and at worst, actively mischaracterizing what's going on in Brussels. Part of the reason here is that the EU is shy to celebrate its achievements. Part of it is also that what the EU achieves might seem far removed from the day to day -- who wants to celebrate banning a chemical from a consumer good? But in my view the biggest part of the blame is firmly onto news outlets who aren't reporting on what's going on in the EU.

Lastly, at the politician level, demagogues all too often use Brussels as a convenient scapegoat. They're able to do so because voters don't learn enough about the EU to begin with as they grow up, and aren't fed a regular diet of EU news throughout their adulthood. Still, there's a word to be put in for the way radicals and extremists on both sides of the political spectrum blame the EU for just about anything they can come up with.

In the end, the result is that large swaths of EU citizens don't know why EU elections matter, and you get situations like in the UK, where it got spun into a Brexit referendum rematch, or like in France where it got painted as a plebiscite of Macron's vision of the EU.

9
What was the lowest known voter participation rate?
6
Can compulsory voting increase the quality of a non-dictatorial republic democracy?
6
Why was the voter turnout so low in the second round of French elections?
77
Why don't poor people vote in the United States?
1
What are the reasons for not having a voter turnout threshold for a nation-wide referendum?
8
How to explain the importance of European Parliament elections to a regular folk living in Eastern Europe?
6
Has anything been published about how YouGov determined the figures they are using for predicted turnout by age?
9
What explains the record turnout in South Korea's elections, despite coronavirus fears?
2
How does turnout in US elections compare across states?
54
Is there evidence that the Republican Party leadership wants fewer people to vote?