Was Bill Clinton charged with a crime by the Justice Department, and why would the same reasoning not apply to Trump if so?

I see the following claim made by Andrew Napolitano on the Fox News network:

"That opinion [that you can't charge a sitting president] is advisory, not mandatory. How do we know that? It came out October 16th, 2000. What happened in November 2000, a month later? The same Justice Department charged the President of the United States, Bill Clinton, with lying under oath and with obstruction of justice and what happened two months after that? He pleaded guilty."

However, despite my online searches, I was unable to find information corroborating this.
Everything I find seems to be about Bill Clinton's impeachment, not indictment.

Was Bill Clinton ever formally charged with a crime?

If not, then what is Napolitano referring to?

A contemporary NY Times Article described what happened succinctly and in detail.

No, fmr President Clinton does not have a criminal conviction. Nor was he charged with a crime. Napolitano is wrong on the facts of the deal to which he refers.

Independent Counsel Robert Ray made a deal with fmr President Clinton on Clinton's last day in office. The deal was that Clinton would admit wrongdoing and accept, without challenge, a few forms of punishment (including a 5-year disbarment in Arkansas... technically a suspension of license to practice rather than a disbarment). At the time the deal was made, Clinton was not charged, so he obviously also was not indicted (because one has to be charged before being indicted).

In exchange for agreeing to the penalties, fmr President Clinton would not be criminally charged after leaving office (remember he made the deal on the last day in office). Which means that even that with which Clinton was being threatened was not what Napolitano claimed. Clinton was not threatened with getting charged or indicted as a sitting President. Clinton avoided an almost certain indictment and a possible conviction which would have been initiated after leaving office.

Did they ever indict and charge President Bill Clinton?

No. This was still against department policy at the time.

Did they ever indict and charge former President Bill Clinton?

Almost. Just before he completed his second term he struck a deal to avoid a potential indictment and charging, as well as a formal disbarment hearing, after he left office.

And that's the thing. Impeachment (whether later acquitted or convicted) does not immunize you from a criminal prosecution eventually. This is specifically mentioned by the constitution. DOJ policy has been that they can't charge and indict a sitting President. But once he's no longer President he is, in principle, fair game.

In Clinton's case, the prosecutor decided that the optics of bringing a former President to trial weren't good, and that his odds of victory were already small. Still, it was leverage enough against Clinton to pressure him into making a deal to avoid actual criminal and disbarment proceedings after leaving office.

Was Bill Clinton ever formally charged with a crime?

Yes, a grand jury is a formal process that produces a "charge sheet" also known as an "indictment", so yes. It is the only way Robert Ray could have proceeded with the remainder of the case.

No, The Justice Department never completed its formalities.

I think, technically, no; but he did plead guilty. [See below.]

President Clinton escaped indictment yesterday by surrendering his Arkansas law license for five years and admitting that he made false statements under oath about his affair with Monica Lewinsky.

News of the deal with independent counsel Robert Ray ...

Robert Ray was the independent counsel investigating the Whitewater Scandal.

Ray's chances of securing an indictment - let alone a conviction - from a Washington jury were widely considered slim to none.

The deal, which wraps up the two last loose ends - Clinton's possible perjury indictment and the Arkansas Bar's pending disbarment proceeding - was hammered out by Ray and Kendall amid a growing political consensus that nothing would be gained from seeing a former President dragged into court.

Judicial Watch, the conservative legal group that has filed dozens of fruitless lawsuits against the Clinton White House, responded with the gut rage that many Clinton haters felt as they watched their last hope of seeing him jailed evaporate.

The group slammed Ray, saying the deal was "an abuse of his office."

Would you have any clue what Napolitano was referring to then?

Using the exact search "Clinton" "2001" "Robert Ray" "indictment" -whitewater provided several (more that 3000) "hits" concerning "plea deal" and "Avoid(s) Indictment"; but none, that I read, show that an an indictment was filed with a court. [The same search with "2000" did not reveal anything I found significant.] Had an indictment been filed, it would have been in the news. I speculate, since that all I have to go on at the moment, that a Grand Jury returned an indictment (against Bill Clinton, signed by the foreperson and given to Robert Ray) and that Robert Ray delayed filing the indictment with the court. Ray then used that indictment to "convince" Bill Clinton to accept a deal.

The title of the cited news article is Robert Mueller's conclusion disputed by Judge Napolitano: Yes, a sitting president can be indicted. Napolitano appears to be referring to an indictment, in November 2000 that caused Bill Clinton to plead guilty to misconduct in January, 2001. That is, if Bill Clinton was indicted, than any "sitting President" can be indicted. This is a disagreement with the idea that a "sitting President" cannot be indicted per the OLC memo.

The word "guilty" was not used; but "admits and acknowledges" is an equivalent. One that was necessary for Robert Ray to close the Federal investigation. So, yes.

Bill Clinton was not facing charges, but, rather disciplinary action.

Following are snips of a PDF providing an introduction and some contents of the Agreed Order of Discipline. 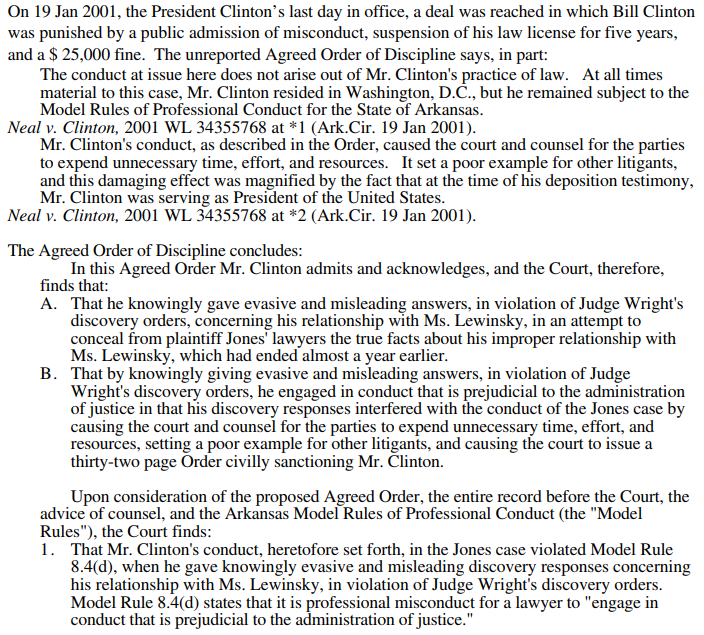 From the Chicago Tribune IT TAKES A PLEA AGREEMENT, January 23, 2001:

The agreement also includes an unequivocal admission of wrongdoing, with Clinton acknowledging that he gave false answers in his Jones deposition. As part of the deal, he was compelled to sign an "Agreed Order of Discipline" which states that he "knowingly" engaged in "conduct that is prejudicial to the administration of justice." That is the disciplinary equivalent of pleading guilty to obstruction of justice.

4
Why didn't Mueller have to submit a report to Congress?

20
Why did the FBI director recommend that Hillary Clinton not be charged?
4
Do perjury as well as obstruction of justice both have the same consequences for the POTUS?
42
Why was Singapore chosen to host the summit between Donald Trump and Kim Jong-Un?
2
Why was the "Privileges and Immunities" clause not interpreted in this manner?
4
What could the Justice Department actually do with the Special Counsel’s report if it said the president likely committed a crime?
42
What's the red, white and blue (with stars) banner that Trump was using on the stage in his election campaign?
8
Why is the head of the Department of Justice not called the Secretary of Justice?
30
Why is avoidance of judicial review of the Texas abortion law and other future US state laws so concerning to the US department of justice?
8
Why would Biden seeking re-election be a reason to appoint a special counsel for the Justice Department's Trump investigations?