Are there correlation/causation between abortion legalization and economic growth?

There are 4 ways to deal with abortion

I suppose the more pro-abortion a state is the less poor people they have to deal with in the next generation.

I would expect some positive causation between abortion policies and economic growth or wealth.

The idea is that rich parents tend to pass on genes, culture, and money that tend to produce rich productive kids.

A programer that makes $1 million a year, for example, will produce higher IQ child, is less likely on welfare, and pass on good work ethic. A welfare recipient will more likely produce other welfare recipients.

So I expect pro choice pro contraception and abortion laws will tend to be good for economy by improving the future generations' IQ, work ethic, and start up wealth.

What about in other countries?

Glossing over dubious assertions like "China [is] far more advanced than India due to its mandatory one-child policy", what has been the staple of demographers for the past 50 years at least is the so-called demographic transition:

As for the reasons for the drop in fertility, contraceptives/abortion are indeed assumed to be among them. Supposedly, one of the few counter-examples bucking the trend of the demographic transition has been Romania when they banned abortion in the 1960s:

As in other Eastern European countries at the time, Romania’s fertility was declining during the 1950s and early 1960s, and in 1965 the total fertility rate of 1.91 births per woman was slightly below the Eastern European average of 2.25. Legal abortion was the dominant method of birth control, and in 1965 about four legal abortions were recorded for every live birth (Berelson 1979: 209). By decree in October 1966 the government introduced overnight a pronatalist policy whose main feature was the abrupt imposition of severe restrictions on legal abortion (although other measures were also introduced to encourage births and restrict the availability of modern contraception). In 1966 Romania’s total fertility rate rose sharply to 3.66, while in other Eastern European countries it averaged 2.16. The scale of the fertility rise moderated after a few years. Some authors maintained that the effect was no more than transient, but Berelson (1979) argued that an effect persisted for at least a decade, and subsequent data suggest that it may have lasted even longer. The nearly perpendicular rise in the graph depicting fertility is shown in Figure 2 and is contrasted with trends in selected other Eastern European countries. 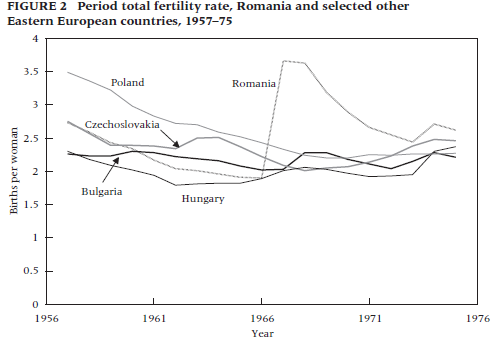 This case meets most of the ten criteria we propose for causation. It highlights also a further possible support for causal inference, namely the reversal of a previous trend. Note too that the policy lasted for over a decade, and so, to some extent, did the elevation of fertility, although it is evident that alternative methods of birth control—including resort to illegal abortion—were increasingly used. Documentary evidence is available on the principal mechanism— an abrupt decrease in the number of legal abortions (Berelson 1979). The abolition of legal abortion in the Soviet Union in 1936 is an analogous case, but the subsequent rise in the birth rate was less pronounced and lasted for only a few years, probably because the measure itself was less strict, less widely adhered to, and was followed soon after by war (Avdeev and Monnier 1995; Avdeev et al. 1995).

Here's the continuation of that graph for Romania from a more recent paper: 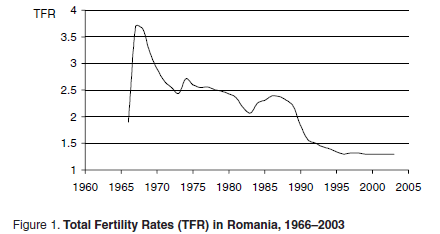 Alas I don't know any studies that have tried to evaluate the impact of that (1960's decision) on the Romanian economy.

The first source I quoted mentioned some general theories for the demographic transition, not necessarily easy to validate:

Causal explanations for the fertility transition are of two main types (Casterline 2003). First are those that emphasize aspects of social and economic development (e.g., industrialization, sustained economic growth). These explanations often focus on changes in the costs and benefits of having children, and a frequent theme is the emergence of incompatibility between high fertility and the achievement of people’s economic objectives.

The second type of explanation is essentially demographic. It sees sustained mortality decline as the process that, by raising the rate of population growth, puts households and the wider society under strain, so eventually causing a broadly compensatory decline in fertility. These explanations need not be mutually exclusive. Both types appear in the classic formulations of demographic transition theory.

As for the status of the demographic transition causation-wise in general... it's far more complicated; to quote what I wrote on Skeptics in reply to a similar question, by quoting a fairly cited paper:

Even with the hindsight of 50 years it has not been resolved whether the demographic transition is a theory, a generalization, a framework for analysis or merely an 'idea'. Or is it an 'historical model, predictive model, or a mere descriptivte term'? The debate about thes status of transition theory continues to occupy a central place in demography.

Not the answer you're looking for? Browse other questions tagged economy abortion .