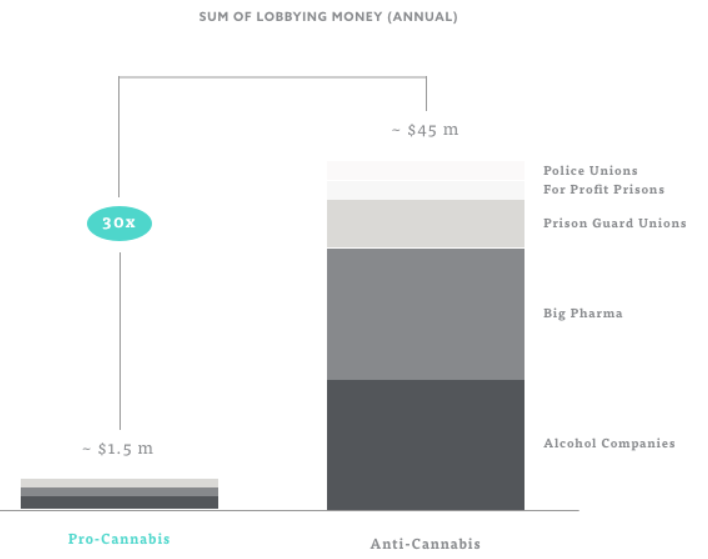 Basically, I want to know how accurate is this. Do lobbyists pay $45 million in US to keep ganja illegal?

This image is not hosted anywhere credible.
This reverse image search will show that this image only appears on ministryofhemp and quora. Therefore, by default, there is no reason you should believe it (or any other claim that is not being made by a reputable source).

The following claims come from The Guardian:

(against legalization) And the Pharmaceutical Research and Manufacturers of America, considered one of marijuana’s biggest opponents, spent nearly $19m on lobbying in 2015.

(for legalization) the lobbying arm of the Drug Policy Alliance, a group that works to change drug laws, has backed November’s recreational legalization measure with $4.47m, according to government records.

(for legalization) Legalization proponents in California have raised nearly $18m, compared to the (against legalization) opposition’s $250,000 in fundraising.

(for legalization) [The alcohol industry] has given nearly $88,000 to the pro-legalization campaign, according to the Center for Public Integrity. That’s because approval of Nevada’s initiative would hand alcohol distributors the sole right to sell cannabis for the first 18 months.

The following claims come from Vice

(for legalization) Cannabis lobbying groups are spending up to $60,000 a month apiece trying to win friends and persuade recalcitrant lawmakers to see their point of view.

(for legalization) According to disclosure forms, NCR billed $45,000 through the first three months of 2019, all of it in support of the SAFE Banking Act, which would clarify that major financial institutions would not be forced to reject cannabis merchants’ business

The following claims come from OpenSecrets

(against legalization) Since 2009 the Beer, Wine and Liquor industry has spent at least $19.5 million each year on lobbying efforts, most of which have been focused on alcohol taxes and regulations. (against legalization) And in the 2012 campaign cycle, the industry gave nearly $17.8 million to federal candidates, parties and committees.

(against legalization) Since 2008, the Corrections Corporation of America has spent at least $970,000 a year on lobbying

(against legalization) GEO has been less consistent in its lobbying efforts and has spent anywhere between $240,000 to $660,000 a year on lobbying since 2008.

(against legalization) The California Correctional Peace Officers Association, for example, gave $1 million to the successful 2008 campaign against Proposition 5

(against legalization) At the national level, many prison guards are represented by the American Federation of State, County and Municipal Employees (AFSCME), one of the most politically active labor unions. In the 2012 campaign cycle, AFSCME gave more than $13 million to candidates, parties, and committees at the federal level. In 2013, AFSCME spent almost $2.7 million on lobbying efforts.

(against legalization) In 2013 alone PhRMA spent nearly $18 million on lobbying, ranking it ninth in spending among all lobbying clients.

(against legalization) Drug manufacturers gave big in the 2012 elections — nearly $21.8 million to various federal candidates and committees as well as the parties.

The following claims come from USAToday

(for legalization) Industry groups with political action committees are the biggest donors, among them the MPP, NORML and the National Cannabis Industry Association, which combined have donated about $327,000 to candidates over the past three Congressional election cycles, according to the Center for Responsive Politics. By comparison, the National Beer Wholesalers Association donated about $1.5 million to candidates in the past year alone.

Conclusion
I would conclude that lobbying dollars are somewhere within the neighborhood of the original graphic's claims. Somewhere around $3 million/year on pro-legalization lobbying. Some tens of millions per year (maybe around $50 million/year) on anti-legalization lobbying. Most anti-legalization dollars are coming from alcohol and pharmaceutical lobbies, with some lesser amount coming from private prison lobbies; but very little coming from any sort of religious / conscientious / public health / family values lobby. The graphic's proportional breakdown of anti-legalization sources does not seem totally accurate, but it seems close, with the pharmaceutical proportion being too small, and the prison / police proportion being too large.

Not the answer you're looking for? Browse other questions tagged united-states lobbying cannabis-legalization .

4
Is it illegal for a President or the Executive Branch to increase Congressional pay/benefits?
2
What are Tax Credits?
3
Does the President have the Constitutional authority to refuse to deport 3-5 million illegal immigrants?
12
Is it illegal for foreigners to pay US citizens to engage in political activities in the US?
43
In the news, it says "essential" government employees would be required to work without pay. How?
2
How does the US House of representatives "read" 1.3 million documents?
20
Would the hypothetical Exxon call be illegal?