If Parliament were prorogued for a long period, how would the government raise funds?

It is reported tonight that Dominic Raab, in his campaign to become leader of the Conservative Party, has indicated he would be prepared to prorogue Parliament. Presumably the purpose would be to prevent Parliament voting against a no-deal Brexit, so that Britain could be taken out of the European Union contrary to Parliament's will.

When Charles I did this in 1629, the problem he had was that during the twelve years that parliament did not sit, the King had no means of raising taxation. Later, the 1689 Bill of Rights forbade the raising of taxation without representation.

So if Dominic Raab, as Prime Minister, advised the Queen to prorogue parliament, what would there be to stop anyone withholding their taxes with impunity?

If anyone thinks this is a silly question, I seem to recall that in the late 1970s the Australian Government did find itself almost in the position of having to stand down its military because Parliament would not pass the Finance Act. And it was only recently that the US federal government was unable to pay many of its staff when Congress refused to pass their equivalent of the Finance Act.

Also, as far as I can tell, the government doesn't need parliamentary approval to borrow money, so it could fall back on that.

In any case, unless it was timed badly (e.g. if the previous approval period expired during the gap), a short prorogation would not affect these. Note, for example, that the same issues apply when Parliament is dissolved prior to a general election, and hence doesn't sit for a few weeks until the new Parliament is elected and sworn in.

However, a long prorogation would eventually run into other problems.

Firstly, although the government would be able to raise some funds without parliament, parliament still needs to regularly approve government expenditure, via Appropriation Acts and Consolidated Fund Acts.

Secondly, as another consequence of the Bill of Rights, annual parliamentary approval is required for the continued existence of the UK armed forces. One can only speculate as to what would happen if that approval were to lapse.

Whatever may happen, the Fixed Term Parliaments Act specifies that the current parliament will end in time for an election on the first Thursday in May 2022. That can only be changed if parliament itself decides otherwise.

I'm not sure of the details, but presumably he (or any other leader hoping to force a no-deal Brexit) might hope to do so in view of the fact that Parliament has already approved a budget for this year. It's the debate for the next year's budget which might be problematic, but not hugely so:

The 2017 budget took place on Wednesday 22 November 2017, and the Chancellor presented the 2018 budget on Monday 29 October 2018. Since 2017 the United Kingdom budget has taken place in the Autumn in order to allow major tax changes to occur annually, well before the start of the fiscal year.

The new Brexit deadline is 31 October. And there's the summer vacation (July-August) followed by party conferences recess (September-October) as well in between: 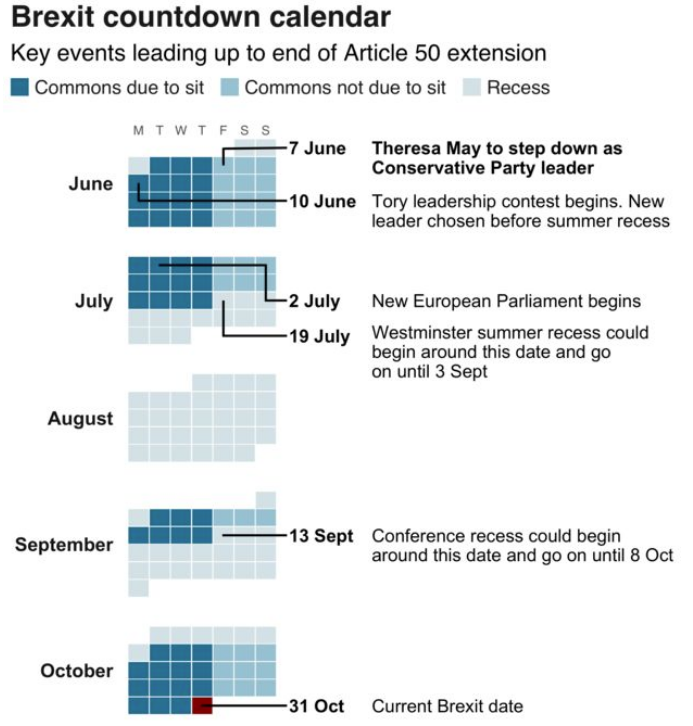 More likely Parliament would not be entirely prorogued (suspended) as soon as the new leader takes office, but since clawing the parliamentary timetable is hard... it might be enough to do prorogue parliament closer to the Brexit deadline.

Nevertheless, for the contrary opinion:

The Speaker of the House of Commons, John Bercow, has said any suggestion that Parliament would not play its part on Brexit was "simply unimaginable".

Also, this idea is not terribly new, back in January:

Jacob Rees-Mogg said the Prime Minister should prorogue Parliament before MPs have a chance to vote for an extension of Article 50 to become law. Prorogation would mean the end of the parliamentary session and therefore all draft laws currently making their way through the Commons and Lords would fall. A no-deal Brexit deal would then happen by default.

Finally, I'm almost certain UK residents would not be able to suspend paying their taxes if parliament is prorogued, as you suggest. The UK tax laws are almost certainly not dependant on a Parliament being in session. (If you want to investigate this last issue further, I suggest you ask on law SE.)

Prorogation is a perfectly normal part of the Parliamentary process. Parliament is normally prorogued every year, between the end of one session and the start of the next, and also for a month or so during general elections. Taxes continue to be paid, and payable. A prorogation lasting for years could cause problems, but what’s under discussion here is one lasting for weeks, which would not.

Not the answer you're looking for? Browse other questions tagged brexit parliament .

4
How long does it take for a parliamentary government to hold unscheduled elections?
9
Does the UK parliament need to pass secondary legislation to accept the Article 50 extension
2
How could the PM prorogue Parliament without the Queen's consent?
5
If Parliament is prorogued, how much time, if any, is there to pass a new Withdrawal Agreement Bill?
19
Is there a precedent indicating what happens when a UK Prime Minister advises a monarch not to give Royal Assent to legislation passed by Parliament?
20
If the UK government doesn't ask for article 50 extension, can parliament do it instead?
5
Is there any indication that the now released 'Operation Yellowhammer' merely a summary?
3
Can Johnson safely ignore the Benn Act assuming his deal passes next week?
2
Why didn't European Union Referendum Act 2015 require ministers to implement the referendum's majority outcome by secondary legislation?
4
For how long will the UK government / parliament elected on December 12, 2019 remain (not counting other possible non-regular elections)?