Why did the World Bank set the global poverty line at $1.90?

In early 2019 Bill Gates tweeted an infographic during the 45 meeting of the World Economic Forum at Davos that showed that the proportion of people living in poverty had decreased from 94% in 1820 to only 10% today.

A critic of this particular graphic, Jason Hickel, an athropologist at the LSE pointed out that the data on which was based on was pretty much mythical as by modern standards, not much data was collected on poverty until 1981. And anything before that

is sketchy, and to go back as far as 1820 is pretty much meaningless

He also points out that the data-set drawn on for the graphic was never meant to describe global poverty but rather rather GDP inequality and that only for a limited number of countries. He further says what the graph reveals is that the vast majority of people went from a situation of not requiring money to where one where a great many people struggle to survive on very little money indeed. The graph casts this as a reduction in poverty but it is actually a description of dispossesion on an epic scale during the colonisation of the global south.

More substantially he points out that the graph is based on a poverty line drawn up by the World Bank of $1.90 per day! Hickel points out that scholars have argued that a more reasonable level is $8.00/day with Harvard economist Lant Pritchett arguing for around $10-15.

Given all this - why exactly is the World Bank committed to a poverty line of $1.90/day. What is their methodology to establish such a line and how do they answer the criticisms of scholars who argue for eight times as much?

So it's worth recalling the principles/derivation for the original figure of Ravaillon et al. (1991):

Different societies have different perceptions of what constitutes "poverty," reflecting (in part) different overall levels of living. Our aim here is only to quantify the extent of absolute poverty in the developing world, interpreted as the inability to attain consumption levels which would be deemed adequate in only the poorest countries. This will leave out many persons who are clearly deprived relative to others around them. [...]

In principle, one can think of the real poverty line as comprising an "absolute" component which is constant across all countries, and a "relative" component, which is specific to each country. In seeking to measure the extent of absolute poverty one might simply ask: What is the lowest real poverty line observed in any country? This would seem to be a good indicator of the minimum acceptable poverty line in assessing absolute poverty. However, the answer may be quite sensitive to the particular countries surveyed and the inevitable measurement errors in assessing local poverty lines, and in comparing them across countries. It will also be influenced by inter-country differences in non-income factors; a country with good public services benefiting the poor, or a relatively low-cost climate, will naturally have a lower income poverty line. In the light of these considerations, a better approach is to try to assess a "typical" poverty line amongst the poorest countries. To implement this approach empirically in the next section, we assume that the relative component for any country is largely determined by its mean private consumption, though we allow the possibility of other factors (such as access to public services) which may also influence the poverty line. We will then be able to estimate the poverty line to be found in the poorest country, controlling for these other factors. [...] 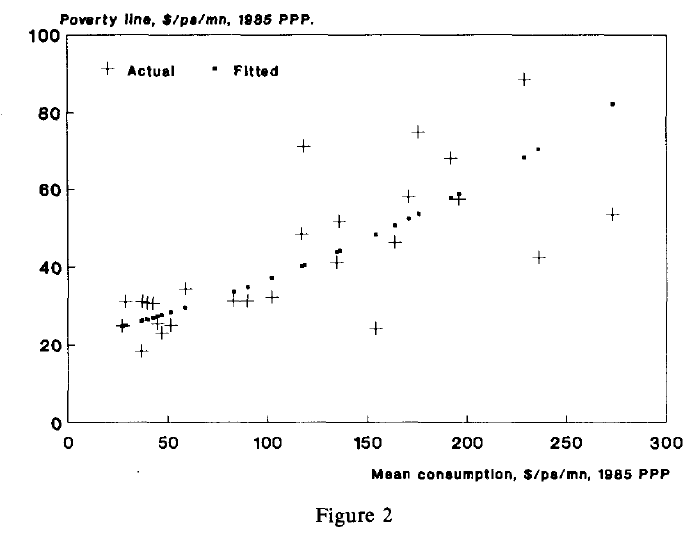 The lowest mean consumption amongst the 86 countries studied in the World Development Report is Somalia at $22 per person per month in 1985 PPP prices. At this point, [their regression] equation predicts a poverty line of $23, only slightly different from that of India. Thus, India's poverty line is very close to the poverty line we would predict for the poorest country, and as such, can be considered a reasonable lower bound to the range of admissible poverty lines for the developing world. [...] The $23 line is certainly on the low side of the range found amongst the poorest dozen or so countries in Figure 2. A more generous, and more representative, absolute poverty line for low-income countries is $31, which (to the nearest dollar) is shared by six of the countries in our sample, namely Indonesia, Bangladesh, Nepal, Kenya, Tanzania, and Morocco and two other countries are close to this figure (Philippines and Pakistan).

The sample of countries used was broadened substantially with the 2005 update:

The new data set on national poverty lines differs from the old (Ravallion, Datt, and van de Walle 1991) data set in four main respects. First, while the old data were drawn from sources for the 1980s (with a mean year of 1984), the new data are all post-1990 (mean of 1999), such that in no case do the proximate sources overlap. Second, the new data set covers 88 developing economies (74 with complete data for the subsequent analysis), while the old data set included only 22 developing economies (plus 11 developed countries). Third, the old data set used rural poverty lines when there was a choice, whereas the new one estimates national average lines. Fourth, the old data set was unrepresentative of Sub-Saharan Africa, with only five countries from that region (Burundi, Kenya, South Africa, Tanzania, and Zambia), whereas the new data set has a good spread across regions, including 25 countries in Sub-Saharan Africa. The proportion of African countries in the old sample was about half what it should have been to be considered representative of poor countries. The sample bias in the Ravallion, Datt, and van de Walle data set was unavoidable at the time (1990), but it can now be corrected.

In this latter model, they ended up using the mean poverty line for the 15 poorest countries as the estimator; the list of these 15 countries was

In contrast the 2011 update was much less revolutionary....

There are some theoretical fixes for this. For example, you can create what are called imputed incomes. These can include the rent you pay yourself to live in your own house; the groceries that you buy from your own fields to eat; the cost of buying access to your well (from yourself). But part of the problem here is that most people don't track these things very well. So in practice, these theoretical solutions are hard to apply.

The 1.90 $PPP poverty line is mean to measure extreme absolute poverty as the poverty line in the poorest counties. This is then expressed in a purchasing-power-parity currency, and this number is revised every few years.

According to the World Bank's FAQ on the global poverty line:

How do you come up with a global poverty line?

When we want to identify how many people in the world live in extreme poverty, however, we cannot simply add up the national poverty rates of each country, because this would mean using a different yardstick to identify who is poor in each and every country. We therefore need a poverty line that measures poverty in all countries by the same standard.

In 1990, a group of independent researchers and the World Bank proposed to measure the world’s poor using the standards of the poorest countries in the World. They examined national poverty lines from some of the poorest countries in the world, and converted the lines to a common currency by using purchasing power parity (PPP) exchange rates. The PPP exchange rates are constructed to ensure that the same quantity of goods and services are priced equivalently across countries. Once converted into a common currency, they found that in six of these very poor countries the value of the national poverty line was about $1 per day per person, and this formed the basis for the first dollar-a-day international poverty line.

And again this year [2015], we used the poverty lines of those same 15 poorest countries from 2005 (holding steady the yardstick against which we measure) to determine the new global poverty line of $1.90 in 2011 PPP.

The 94 % cited above are the fraction of population below the 2 $PPP poverty line. One may argue whether the extreme poverty line with "only" 84 % of the world population below in 1820 would be the more appropriate comparison to the current World Bank extreme poverty line - but then 1 $PPP in 1985 is not the same as 1 $PPP in 2000. Overall inflation suggests that 1 US$ in 1985 ≈ 1.60 US$ in 2000, but PPP for those poverty lines is calculated with an adapted goods index that doesn't include things that are totally out of budget for people in absolute poverty. And, of course, these estimates will anyways be subject to large uncertainty.

Last but not least, the extremely poor countries today are all not too far away from the equator, and thus don't have seasons like the nordic countries. I don't think that if 1.90 $PPP allows survival, say, in the Philippines it means that 1.90 $PPP allows survival in Russia, Canada or Norway: the necessary shelter, clothing and/or additional food due to winter weather is probably not covered.

For an interesting discussion and descriptions of life this extreme poverty level of the World Bank as well as with somewhat higher income I recommend Banerjee & Duflo: Poor Economics (Penguin 2011).

Not the answer you're looking for? Browse other questions tagged economy political-theory policy political-system globalization .

8
UK migration: why the focus on EU only, not global?
6
What are the most important fundamental problems with World Federalism?
6
Why do the people (through their representatives) pay for the police officers' transgressions against the people?
14
Why are UK Bank Holidays on Mondays?
6
What are the most influental groups advocating for a global government?
5
What if any are the impacts of negative interest rates on the life of an average citizen in a first world country?
32
Why did Berlin freeze the rent prices as opposed to letting the market set the price?
3
How did Obama improve the economy