What has Donald Trump accomplished as a president (objectively)? [closed]

I define an accomplishment as a well-defined stated goal that has been successfully met. The goal may have been stated by Trump directly, at some point in his political career, or it may be a goal commonly associated with the Republican Party.

I believe these conditions ensure that answers to the question can be largely objective, regardless of the answers own political stance. To ensure that the question isn't too broad, the answers are not required to be complete. Any list of a size >= 1, (or >= 0 if you think, and can argue, that he has no accomplishments), is an acceptable answer, even if it is not a complete list of his accomplishments.

Politifact has, over the past decade or so, been keeping track of progress made on promises made by US Presidents.

On their "Trump-o-meter", they are tracking 102 promises that Donald Trump made during the campaign. As of June 15, 2019, the state of these promises are:

Promises kept, according to Politifact include creating a private White House Veterans hotline, placing a lifetime ban on White House officials lobbying for a foreign government, moving the US Embassy in Israel to Jerusalem, and creating a 10% repatriation tax.

Promises on which he compromised include ending the defense sequester (it's still there, but now moot), lowering business taxes to 15% (it was cut, but not that far), and enacting a five-year lobbying ban for White House and Congressional officials (WH yes, Congress no).

The BBC created a graphic with data from Politifact on Trumps campaign promises (as of December 24, 2018): 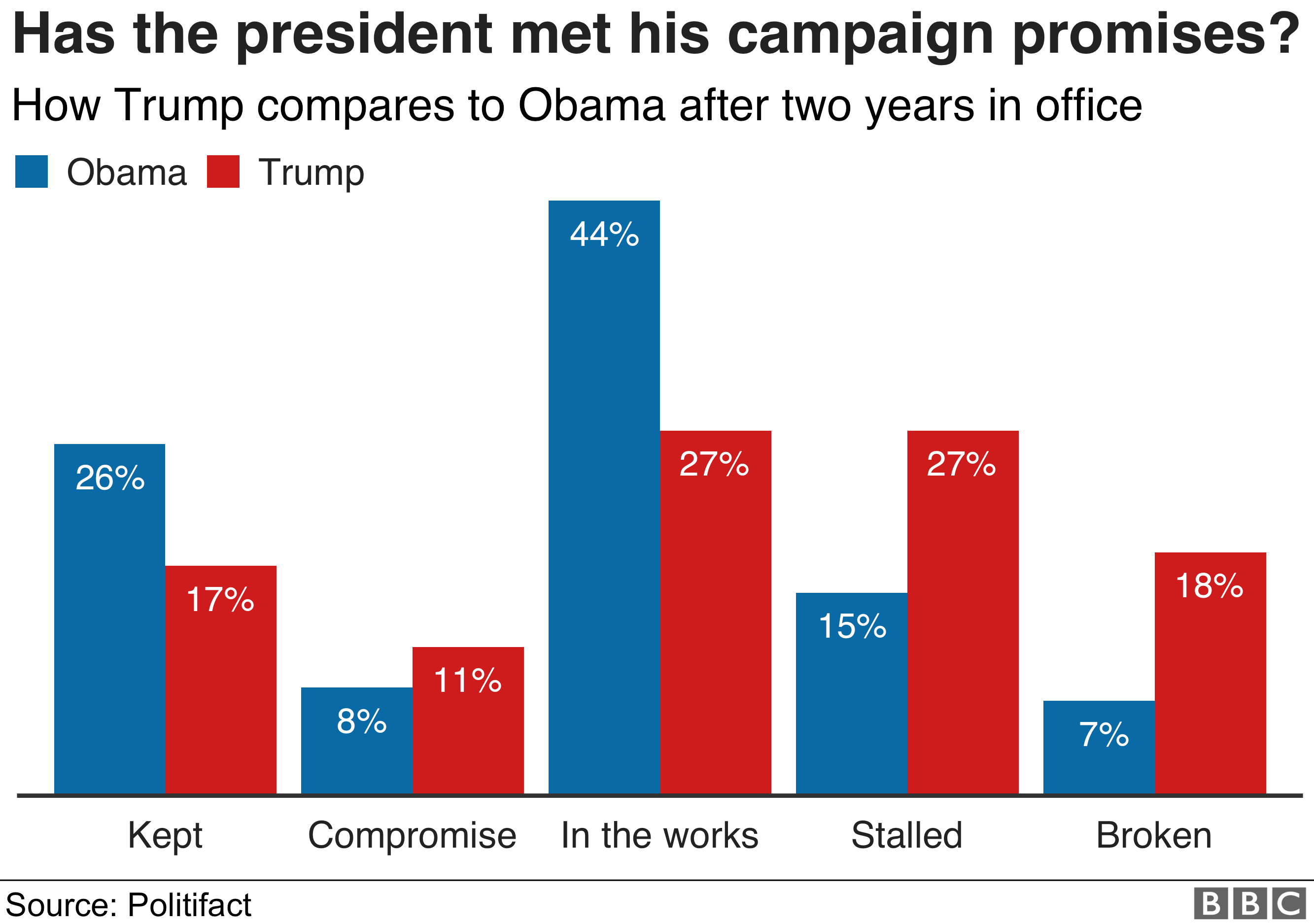 A more detailed view can be seen here. He has delivered on:

The Trump administration also has a webpage showcasing their accomplishments:

Trump promised that he would appoint conservative justices to the Supreme Court. This he did do.

Trump says he has accomplished a lot on North Korea. I would dispute that the accomplishments are anything substantial and constitute mostly symbolic victories, but as such, they're still quite objective.

Stated goal and comments in the past

Trump has mentioned North Korea in the past, long before he ran for president. For example in a Fox News interview in 1999, he said:

Well, the biggest threat to the world is nuclear is nuclear weapons and the nuclear warheads that are being built in North Korea and various other places. I mean, you know, we can talk about Social Security and we can talk about all the different things we can talk about deficits but the fact is that there is a problem out there that is going to be an unsolvable problem, literally unsolvable unless billions of people are killed, and that's nuclear weapons. And in Korea, which is very unstable to start off with, North Korean, you have a man who is just going hog wild and building them, taking nuclear reactors from us.

They're building them anyway! I hate the treaties that they're talking about. But I also think that we have to go and start very hard negotiations with North Korea and other countries. You look at China, what's happening with China, they're building like crazy.

There have also been tweets on North Korea. Donald Trump expressed that something needs to be done on the issue in the years leading up to his presidency:

6 Apr 2013: Our President must be very careful with the 28 year old wack job in North Korea. At some point we may have to get very tough-blatant threats

12 Apr 2013: The only American who has met with the North Korean man child is Dennis Rodman. Isn’t that frightening and sad?

12 Apr 2013: Where is the President? It is time for him to come on TV and show strength against the repeated threats from North Korea -- and others.

13 Sep 2013: Obama is now warning North Korea on the Yongbyon nuclear reactor http://bit.ly/14MGGvK After Syria, our enemies are laughing!

17 Feb 2014: Do you think John Kerry is aware of the fact that they are building nuclear weapons in Iran and North Korea and Pakistan already has them!!

2 Jan 2017: North Korea just stated that it is in the final stages of developing a nuclear weapon capable of reaching parts of the U.S. It won't happen!

There are of course some contradictory tweets as well:

7 May 2014: Crazy Dennis Rodman is saying I wanted to go to North Korea with him. Never discussed, no interest, last place on Earth I want to go to.

7 May 2014: Dennis Rodman was either drunk or on drugs (delusional) when he said I wanted to go to North Korea with him. Glad I fired him on Apprentice!

1 Oct 2017: I told Rex Tillerson, our wonderful Secretary of State, that he is wasting his time trying to negotiate with Little Rocket Man...

In the end, one could argue he's not been consistent on how to approach North Korea, but it's certainly an issue that he's been concerned about for a long time. And that's how we get to more recent developments on the Trump-Kim relationship.

"we have a great relationship"

On February 15, 2019, Trump gave a press conference in the Rose garden. The full video can be found on YouTube.

During that press conference, Trump was asked:

I was wondering what you thought has, you know, been accomplished since the last summit. And then, are we going to be seeing anything concrete on denuclearisation?

A lot has been accomplished. Okay.

Yeah. A lot has been accomplished. We're dealing with them, we're talking to them. When I came into office, I met right there, in the Oval Office, with President Obama. And I sat in those beautiful chairs and we talked. It was supposed to be 15 minutes. As you know, it ended up being many times longer than that.

So most of that isn't easily verifiable, except for the, to use Trump's words:

Indeed, months later, at the end of June 2019, President Trump is still very fond of the relationship with Chairman Kim, quoting from Fox News:

"There's a good feeling. I won't even say developing. I just think we have a very good relationship," Trump said to a room full of South Korea's most prominent business figures in Seoul after his arrival from the Group of 20 summit in Osaka, Japan. "I don't know about beyond the two of us, but I can say the two of us."

That may not seem like much, but given the history between the US and North Korea, as well as Trump's history on the matter, there is certainly a victory there. It may be mostly symbolical, but an accompliment nonetheless.

0
What have been Trump's successful policies/reforms?
0
What has trump accomplished in his first term?
3
How does President Trump's follow-through on election promises compare to presidents in the past 20 years?

1
Has Donald Trump given a public opinion about the Electoral College?
56
Could Donald Trump reverse Chelsea Manning's commutation?
19
What happens if President Trump has been found to be colluding with Russia?
3
Donald Trump's wealth after becoming president
46
Why aren't Republicans more focused on mobilizing a movement towards 'dethroning' Trump?
5
Why is nobody in the Amy Coney Barrett hearings wearing masks?