Did Karl Marx ever use any example that involved cotton and dollars to illustrate the way capital and surplus value were generated?

I live in country with a communist ideology, and Marxism-Leninism courses are mandatory in college. As much as I appreciate some basics on dialectical materialism, I can't help but disdain the way Marxism are taught, that basically tells you to just accept stuff without questions and at the same time acts very smug about their "superior" ideology. It's especially hard to buy into Marxism because lots of terms and examples they cite to prove a point that are supposedly originated by Marx himself are incredibly difficult to verify.

Did Karl Marx ever use any example that involved cotton and dollars to illustrate the way capital and surplus value were generated? According to this "Doctor" guy in whatever he has a doctorate in, Marx proved capitalists' exploitation in capital generation illustrated how surplus value is generated and appropriated by the capitalists, not the workers, for free, with this example:

That's the rough translation, but it kinda sounds suspicious that Marx just used "dollars" in his example for some reason. I mean Germany had its own currency back then right? Did he have beef with Americans or something, or were there no capitalists in Germany for him to "reveal their true exploitative nature"? I asked that lecturer and he just said "I learned this a long time ago but never really bothered to question if 'dollars' really made sense in the context of 19th-century Germany."

Edit: To those who think I'm citing a translation of a translation of a direct quote from Das Kapital, it's not. It's just a translation the example written by the author of my textbook, so the exact wording definitely doesn't match the original. However, keywords like "dollars", "cotton" and "surplus value" should be immediately searchable together in at least a paragraph if such an example is that famous (even if I use translations, it shouldn't be too hard to search for the German word for "cotton"), and in this case they're not, which lessens the credibility of the claim that this was an example Marx actually made.

A searchable PDF suggests it's been freely translated: 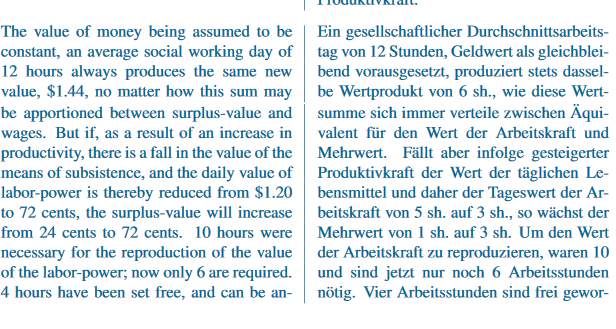 Apologies for using an image, but the side-by-side didn't paste sensibly. You can see that the currency is different but has been converted; the English uses dollars, the German original uses "sh", presumably for "schilling". Elsewhere in the text he uses pounds Sterling (abbreviated as "Pfd.St.").

It's especially hard to buy into Marxism because lots of terms and examples they cite to prove a point that are supposedly originated by Marx himself are incredibly difficult to verify.

Personally I agree with this - Marx is quite wordy, and has been translated with varying degrees of competence. He was also writing economics at a pretty early stage in the development of the science. Referencing only Marx is like trying to do psychology by only talking about Freud.

The translation in pjc50's answer is useful, but I don't think they identified the right spot. Something that vaguely matches the quote in the original question starts at page 595 in the PDF. I think it's really instructive to see, since the very short quote in the question refers to a much longer and more detailed analysis by Marx.

Throughout Capital, Marx (who was writing in London) takes the British economy and the history of British capitalism as his jumping-off point. This also goes for his references to currency: it's always pounds streling, schillings, etc. Consider that much of the research for Capital was done in the reading room of the British Museum in London, where Marx was basically poring over economic data (from England). This would have been denominated in British currency, and I imagine there was little reason to waste time making some kind of conversion to anything else.

Marx rarely mentions the U.S. in his economic analysis and, although I can't say he NEVER uses the word 'dollars', it's certainly not part of his common descriptive language. When you ask if Germany had its own currency back then: when Volume 1 of Capital was published, there wasn't even a unified Germany! It should be noted that at this time most currency was backed by some kind of precious metal.

As a side note, I understand it's a rough quotation, as you said, but I don't think it even fundamentally grasps Marx's argument. That's a story for another day.

This is not Marx.

As the quote gets Marx’s own description of the relationship between wage, effort and surplus confused this is not a Marx quote.

The bit of Marx you want is Capital I: III ch7 s2

Our capitalist foresaw this state of things, and that was the cause of his laughter. The labourer therefore finds, in the workshop, the means of production necessary for working, not only during six, but during twelve hours. Just as during the six hours’ process our 10 lbs. of cotton absorbed six hours’ labour, and became 10 lbs. of yarn, so now, 20 lbs. of cotton will absorb 12 hours’ labour and be changed into 20 lbs. of yarn. Let us now examine the product of this prolonged process. There is now materialised in this 20 lbs. of yarn the labour of five days, of which four days are due to the cotton and the lost steel of the spindle, the remaining day having been absorbed by the cotton during the spinning process. Expressed in gold, the labour of five days is thirty shillings. This is therefore the price of the 20 lbs. of yarn, giving, as before, eighteenpence as the price of a pound. But the sum of the values of the commodities that entered into the process amounts to 27 shillings. The value of the yarn is 30 shillings. Therefore the value of the product is 1/9 greater than the value advanced for its production; 27 shillings have been transformed into 30 shillings; a surplus-value of 3 shillings has been created. The trick has at last succeeded; money has been converted into capital.

There may or may not be a Marx quote that can be distorted into the above, but it remains one of the most un-Marxist pieces of prentense Marxism I have ever read.

"True value" is clearly a phrase Marx would never use in serious discussion. Your Doctor seems to believe that "labour" has a natural, god-given, value. Marx however was very explicit in that "labour", per se, has no value; "labour power" has value, but such value is socially determined, and therefore variable. More importantly, for Marx, the specific concept of "surplus value" is not the difference between market price and a morally correct price. It is the difference between the value of labour power and the value that labour power can create. In other words, a worker is paid for the value of his labour power (which is the value of the things he needs to live a socially acceptable life - food, housing, clothing, transport, etc.), but capitalist appropriates the results of his labour, which have by far more value than that.

There are other problems with this gem of pseudo-Marxism, namely its confusion of value and price, but what it reveals is gross ignorance of the theory it is supposed to support.

Here, in comparison, is what Marx says about the production of linen, using cotton as raw material:

Every condition of the problem is satisfied, while the laws that regulate the exchange of commodities, have been in no way violated. Equivalent has been exchanged for equivalent. For the capitalist as buyer paid for each commodity, for the cotton, the spindle and the labour-power, its full value. He then did what is done by every purchaser of commodities; he consumed their use-value. The consumption of the labour-power, which was also the process of producing commodities, resulted in 20 lbs. of yarn, having a value of 30 shillings. The capitalist, formerly a buyer, now returns to market as a seller, of commodities. He sells his yarn at eighteenpence a pound, which is its exact value. Yet for all that he withdraws 3 shillings more from circulation than he originally threw into it. This metamorphosis, this conversion of money into capital, takes place both within the sphere of circulation and also outside it; within the circulation, because conditioned by the purchase of the labour-power in the market; outside the circulation, because what is done within it is only a stepping-stone to the production of surplus-value, a process which is entirely confined to the sphere of production. Thus “tout est pour le mieux dans le meilleur des mondes possibles.”

This is what it seems to have been misunderstood, in the most vulgar Rousseaunian way, into the paragraph you quote. It is, however, completely different: for Marx, the "metamorphosis" takes place during the process of production. To the author of your quote, it isn't even a "metamorphosis", it is just a swindle.

As you see, Marx uses "cotton" in his example, which is natural, since cotton fabric was the main industrial product in the country he was writing in (England, not Germany), but his monetary unit is the schilling (again, one of the monetary units of England). But as he wrote in German, it is possible that the schilling was introduced by the translator - and that an American translator would feel free to substitute dollars for schillings.

Not the answer you're looking for? Browse other questions tagged communism marxism .

24
For what stated reasons (not opinion) is classical communism antagonistic towards the bourgeoisie more than the aristocracy?
17
What are the modern arguments for Communism?
16
What is the relationship between communism and 'a classless system'?