If drug prices are much higher in US, and the US government prohibits import, why not just import online for all personal uses? [closed]

Ask Question
Asked 1 year, 9 months ago
Active 1 year, 3 months ago
Viewed 304 times
-6
Closed. This question is off-topic. It is not currently accepting answers.

If medication prices in the US are higher than in other countries, why not import from there?

This is a natural extension of this question.

However, something is missing.

With Silk Road, people can import heroin almost with impunity.

If people can import heroin, cocaine, ganja, even though it's illegal, how much more can people safely import insulin for example?

Say I have a diabetes. Say I import insulin or Viagra from India for personal use. Will I go to jail?

Is punishment heavy on that?

Does the US have laws jailing people for importing medically necessary drugs for personal uses? I mean normal drugs, like insulin. Not narc like XTC.

Even if the drugs are patented, do people go jail for importing small amounts of generic drugs, say insulin, for personal uses?

The US government cannot enforce laws against insulin import easily.

Note: The way Silk Road works is that selling in Silk Road is very dangerous for the seller. One fingerprint, he's done. However, buying is relatively safe.

For legal drugs, like insulin, I do not think the seller needs to fear getting caught. I don't think an insulin pharmacy should fear getting raided. They're selling insulin, not narcotics.

If importing insulin for personal uses can lead to jail time, that would be an answer. (However, that would be very bizarre. What? People sent to jail for importing something totally save? Insulin, unlike ganja, doesn't have that bullshit story that it's not safe. Everyone knows insulin is safe.)

Note: A good answer would be things like, they will go to jail if they import Viagra from another country. That would explain why they don't. (As far as I know that's not the case.) Another good answer would be, people don't know it. In fact, I want to know if it's even illegal in the first place to import many drugs for personal uses.

This is a sumary of the question after some comments and answers told me that there is no penalty at all for buyers for personal uses.

There is a solution for high drug price in US. Just smuggle

The penalty is nonexistant for personal uses. You're only in trouble if you're selling it. But the sellers are outside US and outside US jurisdiction.

Why the market doesn't take care of this is beyond me? Why Americans still complain about high drug prices?

So why not? Why don't I see online pharmacies where people just buy cheaper stuff online? The pharmacy can smuggle the drugs in US. I am not talking about narc here. Normal drugs.

Why not smuggle indeed?.

The price-gouging and market fixing that presently exists, but in decades past would have been illegal in the US, is causing patients to die:

The price is so high that people are doing desperate things to get by, like using expired insulin, relying on crowdfunding to pay their bills, or taking less insulin than they need in an effort to ration their supplies. Rationing is extremely dangerous and can lead to a deadly condition known as diabetic ketoacidosis. Three people died in 2017 while rationing their insulin. Three more died in 2018.
--- High insulin costs are killing Americans (The Right Care Alliance)

So the rationale would be to protect patients from something that clearly should be a crime, (arguably murderous price-gouging), its victims might be morally justified in committing a crime doing something that should certainly not be illegal, (staying alive by obtaining an inexpensive dose).

As for feasibility, apparently Americans have been smuggling prescription drugs for years. Here's a picture from 2003 of Nogales, Mexico pharmacies with signage aimed at the American tourist market: 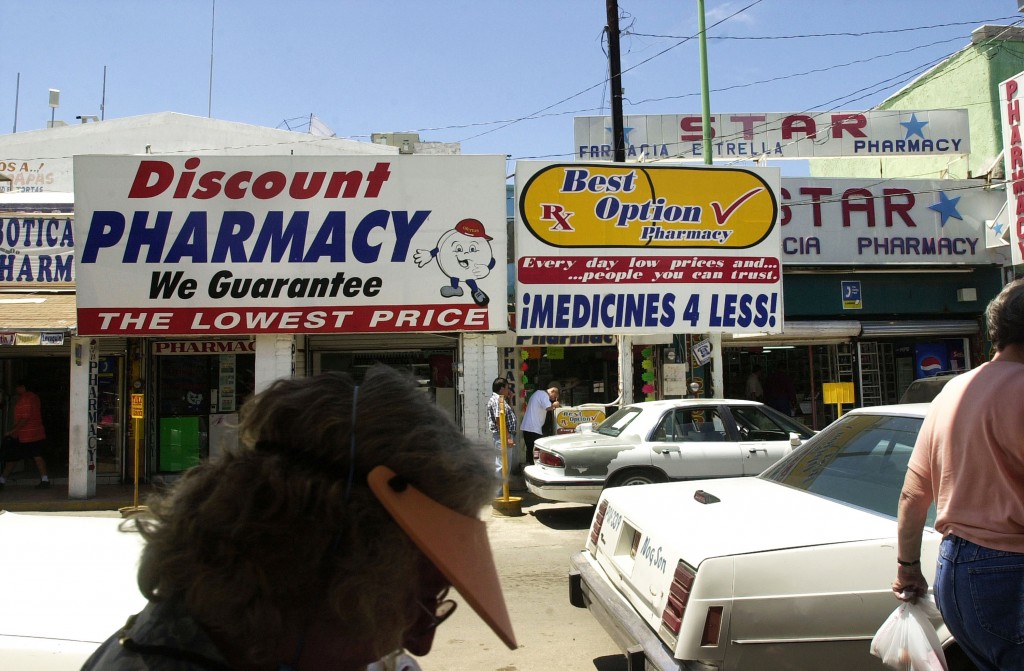 Well, it would be smuggling. Trade in unlicensed medical products will be prosecuted.

I recall news reports that some US residents would travel to Canada and buy drugs like insulin, but the journalist said this was legally a gray area.

The main cost of drugs is in development and securing FDA approval through clinical trials. The approval process alone can cost on the order of hundreds of millions of dollars and it is usually done by having a separate corporate entity go through the effort sponsored by various pharmaceutical companies who "invest" in that entity. This "investment" plus the cost of buying the company after the approval is attained is where the hundreds of millions of dollars are spent.

This is not unique to drugs. It is also not legal to import movies which are sold oversees if they are not licensed to be sold in the US. The same is true of music (although very little music is sold on physical media nowadays). And, to some extent, it is true of books (although not as much because, other than textbooks, books are pretty much priced pretty similarly).

Some comments have suggested that the question is also concerned with the cost of drugs whose cost is not at all dependent on intellectual property licensing costs (off-patent drugs). There are already pharmacies (such as Costco) whose business models are based on selling commoditized drugs at steep discounts. They do import some of their products from abroad. So, in effect, this suggestion is already implemented in the market place.

So why don't americans just access tons of pharmacy online where people can buy cheaper drugs from oversea?

I have an educated guess.

The customer is not the one buying the drugs. The insurance, or HMO, or government, buy the drugs. Some drugs are prescription only and you probably can't ask doctors for generic equivalent.

I also suspected that Doctors can get his licensed revoked if he prescribe cheaper generic drugs. I wonder if anyone can confirm. Say a drug cost $200. Can a doctor recommend or prescribe cheaper drugs that cost $10 from an online pharma?

If I were pharma lobbyist, I would lobby government to ensure that as much as possible, all people are "insured" through various government program or have mandatory insurance.

Then pharma companies can jack up prices without having to worry with competition from outside of US jurisdiction.

So, a small number of people that can't afford cheap international drug price is then used as justification to jack up prices for everyone.

That's what I think is happening.

Note: From comments, importing drugs from oversea may be illegal but minimally enforced. In general I have not heard anyone going to jail because they import stuffs for personal uses.

In general, you risk having 5% of your packaging seized. If you can show you have prescription, you probably can still get it.

Here is some info from Wikipedia.

Any package containing prescription drugs may be seized by US Customs and Border Protection. The package may be held and eventually returned to the sender if the addressee does not respond and provide proof that they are allowed to receive these drugs (e.g., a valid prescription).[30] In practice, the number of packages containing prescription drugs sent to United States on a daily basis far exceeds CBP's capabilities to inspect them.[31] In the past, packages often passed through customs even if they were not sent from Canada or otherwise didn't meet the requirements of section 844 of 21 USC. Until recently, about 5 percent of prescription drug packages sent from Canada were being seized.[32]

DEA and FDA[33] generally do not target consumers unless drugs are imported in large quantities (suggesting intent to distribute) or represent a perceived danger to public health (opiates, amphetamines).

Rarely, drug importation laws are enforced on the local level. For example, in June 2005 in Baton Rouge, Louisiana, a number of customers of online pharmacies were arrested by local law enforcement officers and charged with possession of a controlled substance without prescription.[34]

The act of importation of the controlled substance from overseas violates 21 USC, Section 952 (up to 5 years in prison and $250,000 fine for importation of non-narcotic Schedule III, IV, or V drugs; possibly more for narcotics and Schedule I and II drugs). The act of simple possession of a controlled substance without a valid prescription violates 21 USC, Section 844 (up to 1 year in prison and $1,000 fine). FDA does not recognize online prescriptions; for a prescription to be valid there must be a face-to-face relationship between the patient and the health-care professional prescribing the drug. What exactly constitutes a "face-to-face" relationship is considered by many online pharmacies to be a subjective definition that would allow them to operate as an adjunct to the patient's own physician if the patient submits medical records documenting a condition for which the requested medication is deemed appropriate for treatment. Sections 956 and 1301 provide exemptions for travelers who bring small quantities of controlled substances in or out of the country in person, but not by mail.

The law further specifies that enforcement should be focused on cases in which the importation by an individual poses a threat to public health, and discretion should be exercised to permit individuals to make such importations in circumstances in which the prescription drug or device imported does not appear to present an unreasonable risk to the individual.[35]

It is also illegal to import non-approved drugs (21 USC sections 331(d) and 355(a)); however, FDA policies suggest that, under certain circumstances, patients may be allowed to keep these drugs.[36]

Individual U.S. states may implement their own laws regulating importation, possession, and trafficking in prescription drugs and/or controlled substances.[citation needed]

For several years, the states of Nevada,[37] Minnesota, Illinois and Wisconsin have run official state programs to help their residents order lower-cost drugs from abroad to save money.

Not the answer you're looking for? Browse other questions tagged united-states drugs capitalism .

12
If medication prices in the US are higher than in other countries, why not import from there?

3
Can racial profiling (by police) in the United States be explained simply by the socioeconomic status of the suspect?
12
If medication prices in the US are higher than in other countries, why not import from there?
8
Why is Medicare/Medicaid prohibited from bargaining for price in US?
4
What justice and legislative system reforms have been proposed that account for the absence of free will?
2
Why did cannabis get legalized first?
0
Why do laws prohibit possession and usage of narcotics separately?
5
How many US states still prohibit transportation of alcohol across state lines without a license, even for personal use?
4
(How) did Trump's administration rebut the accusation that lowering drug prices via regulations is tantamount to socialism?