How does President Trump's follow-through on election promises compare to presidents in the past 20 years? [closed]

Ask Question
Asked 1 year ago
Active 1 year ago
Viewed 263 times
3
Closed. This question is opinion-based. It is not currently accepting answers.

That is to say - with nearly three years under his belt, how do President Trump's record of promises compare to other presidents past the year 2000?

In this question, it is shown what promises President Trump has made during his campaign and how many of those were kept. One answer even provides a track record from Politifact on 102 promises made by Trump, and whether or not he delivered on them.

Compared to George W. Bush and Barack Obama at their point in their respective presidencies, has Trump kept and/or broken more or fewer promises?

Not a full answer, but comments don't allow to post images. Politifact offers a partial answer: 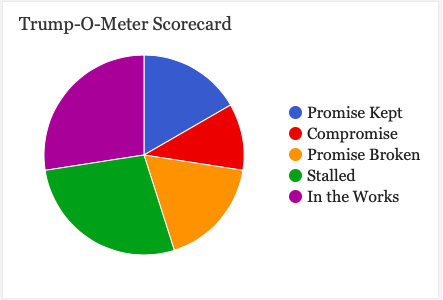 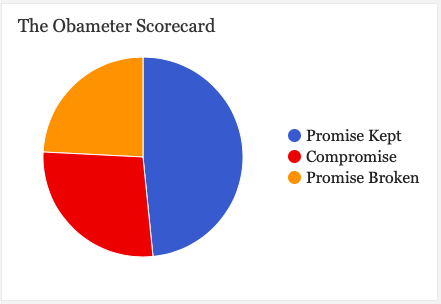 8
What has Donald Trump accomplished as a president (objectively)?

4
Why are US elections every 2 years, but only include the President every 4 years?
1
Can the US president be impeached through a petition?
9
How does the timeline of Donald Trump's appointments compare to that of previous President-elects?
2
Did Reagan's use of “God bless America” in his 1980 speech reflect tones that were already present in the political discussion?
68
Why was President Trump heavily criticized for congratulating Putin on winning the election?
5
Are there some systematic attempts to evaluate how pro-Christian-Right presidential policies have been?
62
Why has Donald Trump's popularity remained so stable over a rather long period of time?