On what principle did UK seize an Iranian oil tanker? Is there no right of passage for third countries?

(It gets more complicated, because it was in waters claimed by Gibraltar, a claim that Spain disputes, and the ship was apparently registered in Panama; but I'm not sure those complications affect the answer in this case)

I'm not going to stake who is right on this, but the UK/Gibraltar claim/action is based on the following justification:

Gibraltar's government said in a statement Friday that it is extending the detention of the supertanker by 14 days after obtaining an order from the British territory's Supreme Court.

"The Supreme Court has issued today's order on the basis that there are reasonable grounds to consider that the detention of the Grace 1 is required for the purposes of compliance with the EU Regulation 36/2012 on sanctions on Syria," the statement said.

Note that insofar the EU has refused to comment on whether the regulation was properly applied or not in this case.

The European Union's executive declined on Thursday to comment on the tanker detained in Gibraltar, saying that it had no information on the case and that implementing the bloc's sanctions was a matter for the member states.

Also the tanker might not have been under Panamanian flag at the time of its detention:

While several online shipping trackers say the vessel was sailing under the flag of Panama, the Panama Maritime Authority (PMA) said in a statement that Grace 1's registry was canceled on May 29 after it was notified the ship may be participating or linked to financing terrorism.

"The PMA ... was notified of the international alert regarding the vessel GRACE 1, which indicated that this vessel might be participating or being linked to the Financing of Terrorism, or in support of the destabilizing activities of certain regions led by terrorist groups," the PMA said.

Also, regarding ownership of that tanker:

Lloyd’s List reported Grace 1 had “a complex ownership chain” and was controlled by Russian Titan Shipping, a subsidiary of TNC Gulf, a Dubai-based shipping company. Executives connected with both companies hold Iranian university and technical qualifications, or list their names in Farsi.

So the details are still sketchy. I could not find the full text of Gibraltar Supreme Court decision on-line, insofar. It might have more details.

There's a more recent Gibraltar government press release on this though, which says among other things:

The Grace 1's position well inside BGTW when boarded can clearly be seen on the attached screenshot. The ship remains detained in that area.

The detention of the vessel relates to the suspected destination of the cargo, the Banyas refinery in Syria, which is owned by a company, the Banyas Oil Refinery Company. This company is the subject of European Union sanctions under EU Regulation 36/2012, which is directly applicable in Gibraltar.

The investigations of the Royal Gibraltar Police continue and the vessel remains detained under an Order of the Chief Justice of the Supreme Court of Gibraltar. 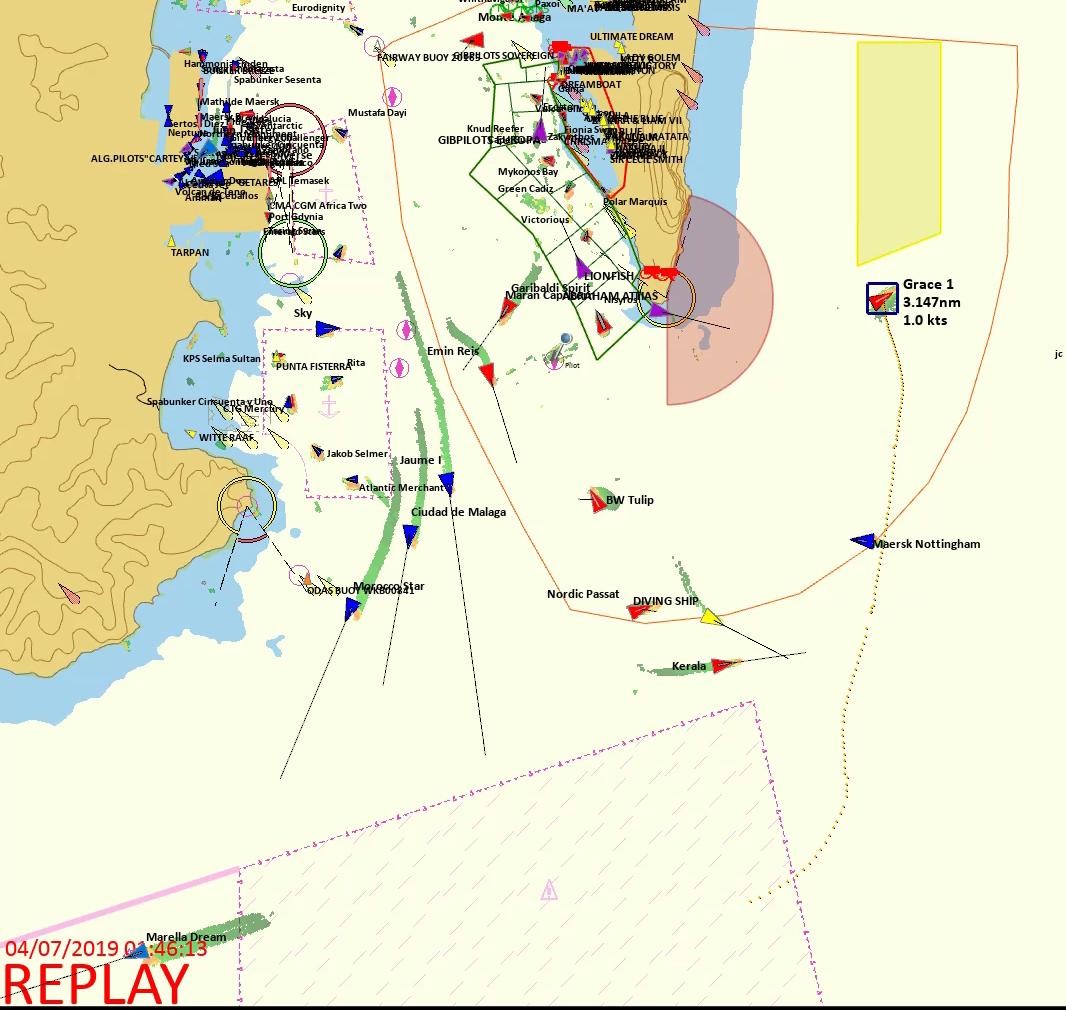 So at least this much is clear: the Gibraltar government claims to have detained the tanker inside its own (claimed) territorial waters (BGTW), rather than in what they recognize as international waters in the Straights.

And regarding innocent passage, I'm speculating here since Gibraltar has not said anything about the issue in relation to Grace 1, but some news from 2015 discuss it in relation to Spanish vessels:

A vessel can only be considered to be on innocent passage through British Gibraltar Territorial Waters if it's moving continuously and expeditiously, and is not engaged in any activities that are prejudicial to Gibraltar or the UK. That's the basis of expert legal advice received by the Government on the question of innocent passage as it relates to the United Nations Convention on the Law of the Sea.

In November last year, the Government announced it had commissioned a legal opinion on the definition of innocent passage given discussions that were underway at the time relating to the procedure for categorising the entry into BGTW of foreign state vessels. Following the latest spate of incursions by Spanish vessels this month that provoked a formal protest by the UK, GBC [Gibraltar Broadcasting Corporation] asked Number Six Convent Place whether it had received this advice.

In reply the Government confirmed that it had. The legal opinion further states that when it appears objectively from the foreign vessel's behaviour that its purpose in passing through BGTW is to assert its country's sovereignty claim over the waters, its passage would not be deemed to be innocent under international law. Number Six says it will continue to pursue this matter with the Foreign Office on the strength of the legal opinion it's received.

That news was from 2015, but incidents with Spanish vessels were also reported in February this year.

So clearly the Gibraltar and UK governments are generally aware of the issue of innocent passage through BGTW, and they have a stance on it at least as far as Spanish vessels are concerned. That they chose not to mention/discuss innocent passage in the Grace 1 case probably means they think it doesn't apply to ships violating EU embargoes, presumably because allowing ships passing through Gibraltar's (claimed) territorial waters to violate EU sanctions/embargo is considered "prejudicial to Gibraltar or the UK".

The key legal point of their justification seems to be this, from the press release linked and quoted by Fizz:

Article 18 of UNCLOS says this:

Once you stop to take on supplies, it's no longer passage.

I also don't think stopping to take on supplies in itself counts as calling at a roadstead or port facility. But even if it did, "passage" only seems to apply to going to or from the place, not actually being at it. Once you've chosen to stop in a country's internal waters or facility, you're placing yourself fully within its jurisdiction.

As per UNCLOS Part 3 Article 38, the right of unimpeded transit passage applies to straits such as Gibraltar and Hormuz. Stopping to take on supplies (if true) could not have altered the vessel’s right to transit passage as it still remained incidental to her ordinary navigation.

In fact the vessel was still exercising its right of transit passage without any intention of harbouring in Gibraltar before being impeded. 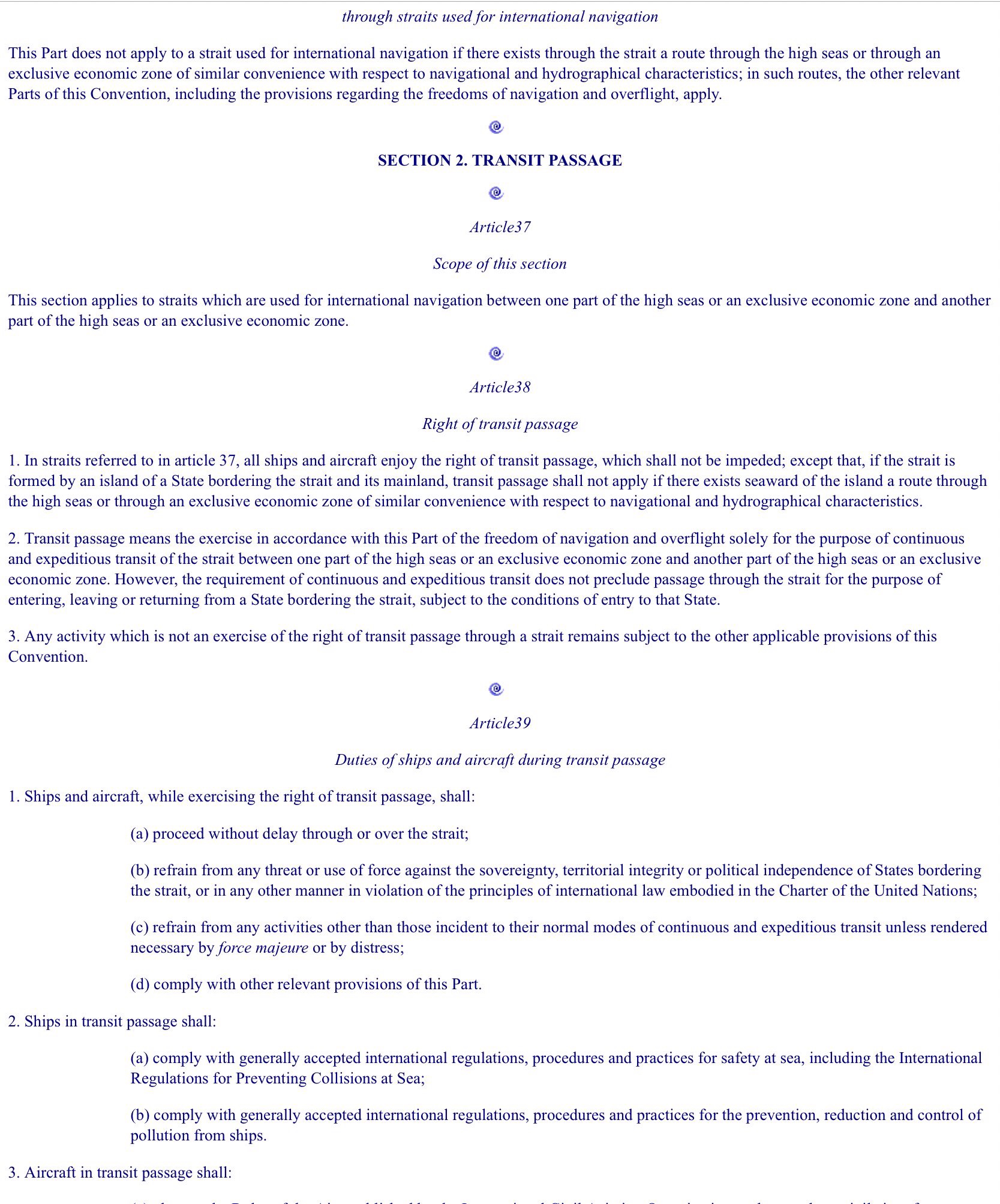 Grace 1 was supposed to undergo maintenance before being captured, but the latest events disrupted installation of spare parts, which rendered the tanker incapable of undertaking a long voyage.

If Grace 1 was unable to continue its journey without maintenance, it could be argued that this constitutes an emergency as set out in international shipping laws, and thus its stop in Gibraltar for maintenance falls within innocent passage.

8
Does Iran recognize any of the water in the Strait of Hormuz as being International Water?

4
What benefits are there for a nation to sign the NPT?
24
What evidence is there that the Assad regime was responsible for the chemical attack in April 2017?
5
Why did Visegrád Group members ask for warranties for their countries participation in EU future discussions?
2
Why is there so little support for the Minority SafePack in Western European countries, despite them supposedly being pro-multiculturalism?
1
What did Israel offer Russia for cancelling the S-300 delivery to Syria
11
Are there EU countries that offer a path to citizenship for non-EU foreign workers?
5
Where might the Iranian-oil-carrying tanker Grace 1 have been heading?
1
Can avoiding the Strait of Hormuz (ideally with a canal south of Kumzar) prevent further escalation of the high tensions there?
39
What is Russia getting in exchange for their gas and oil now that they've been cut off from the Western financial system?
5
What is the sense of northern European countries being part of the Union for the Mediterranean?