If the US government is running deficits valued at 5% of GDP, is the economy really growing? 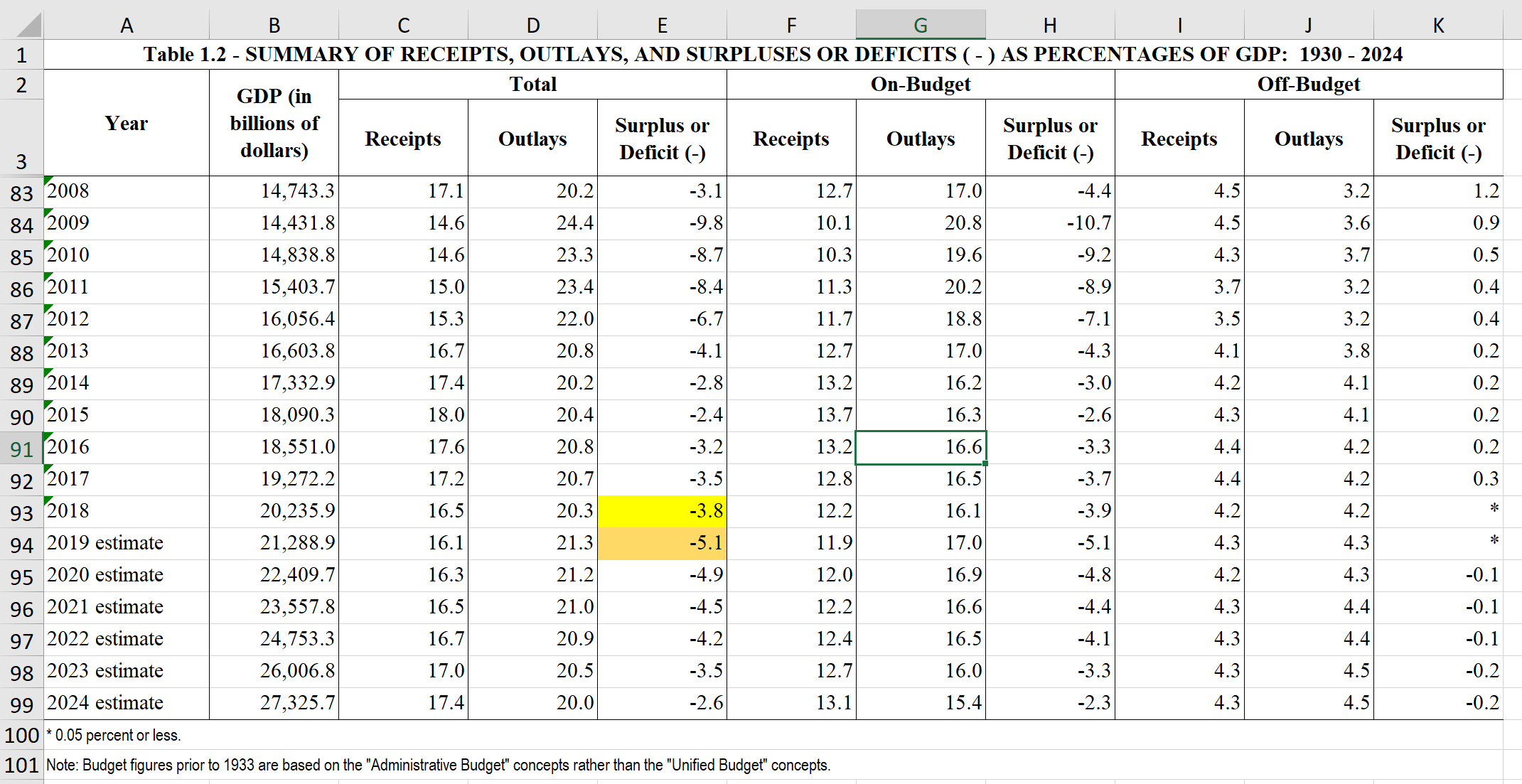 The US government is currently running a projected 2019 deficit of 5.1% of GDP (somewhere around $1.05 Trillion).

The Bureau of Economic analysis currently projects 2019 real GDP growth to be 3.1%. Even if you use their nominal (current-dollar) GDP figure, it is still only 3.8% growth.

Aside: take a look at those 2009-2012 numbers. Tons of government deficit spending there, too and only modest growth from those years.

Yes the US economy is growing. GDP is the market value of all the produced goods and services. If it grows, it grows. A growing GDP means that someone consumes more (not necessarily everyone). The economic gains for some are real.

Now the thing with the deficit. The US government is partly borrowing money to finance its operations, huge amounts of money. It could increase taxes instead or cut the budget both of which might influence growth negatively, but the interest rate that the US government has to pay on government bonds is quite low and in some other countries currently even negative. What do you do if people want to throw money at you? You take it. The deficit spending in the US can continue for some more time while the overall debt level is still not regarded too high.

At some point investors may lose faith in the US dollar and switch to other currencies or a future US government could decide to prints lots of dollars to pay back creditors, which then results in some kind of inflation. Then a lot of gains made now could prove being only temporary. We have to wait and see how it all works out in the long run.

In general, you would have to look at the overall debt, government and private and commercial. And you would also like to look at inequality because who cares if the upper 1% earns much more while real wages are stagnating for the lower 50%? Unequal economic gains can be losses for many.

These things are not directly related. Having a deficit expressed as a percentage of GDP says nothing at all about how much is being “injected into the economy” by government spending.

All government spending on final goods and services, at every level, regardless of whether it is deficit spending, is included in the calculation for any country’s GDP. In the United States, that is usually slightly less than 20% of GDP each year (I haven’t looked up current numbers). Although the government share of GDP has been increasing, it has not been increasing by anything close to 5% or 3% of GDP annually.

Note that, a large part of government spending is not spent on final goods and services, but on transfer payments, like Social Security. That would be counted in the deficit, but not counted in the government’s share of GDP.

I think that you effectively answered your own question by attaching the data. I'd ask you the following question - was the GDP growing in previous years? In previous years you had the same problem - modest growth and significant deficit. Nevertheless, from time perspective you may see that GDP grew in those years.

The missing part of puzzle:

Your gut feeling would be correct, if after spending spree in one year, the next year economy would fall back to previous output level. As this is not happening, then you may call the growth as "real".

24
How would the trillion-dollar coin save the United States' economy?
13
Why is there concern about the growing income gap, and is there an ideal level?
4
Did Reagan use public spending to make the GDP grow?
0
Which policies has Trump enacted that has (possibly) influenced the GDP and economy positively?
3
How do governments around the world model the economy?
5
How long would it take to pay off the U.S. national debt if new deficits were eliminated?
2
How much does economy affect the US presidential election?