Who determines when road center lines are solid or dashed?

A two lane state highway I regularly travel was recently re-paved, and the last step was to paint the center lines. Seeing the freshly painted lines prompts this question:

The beginning of traffic safety for rural highways was with civilians. Their work resulted in government action and led to standardization throughout the United States.

At the start of the 20th century—the early days of the rural highway—each road was promoted and maintained by automobile clubs of private individuals, who generated revenue through club membership and increased business along cross-country routes. However, each highway had its own set of signage, usually designed to promote the highway rather than to assist in the direction and safety of travelers. In fact, conflicts between these automobile clubs frequently led to multiple sets of signs—sometimes as many as eleven—being erected on the same highway.

Government action to begin resolving the wide variety of signage that had cropped up did not occur until the early 1920s, when groups from Indiana, Minnesota, and Wisconsin began surveying the existing road signs in order to develop a standard. They reported their findings to the Mississippi Valley Association of Highway Departments, which adopted the report's suggestions for the shapes to be used for road signs. These suggestions included the familiar circular railroad crossing sign and octagonal stop sign.

In 1927, the American Association of State Highway Officials, or AASHO, published the Manual and Specifications for the Manufacture, Display, and Erection of U.S. Standard Road Markers and Signs to set standards for traffic control devices used on rural roads.

Who determines when road center lines are solid or dashed?

In 1966, Congress passed the Highway Safety Act, P.L. 89-564, 72 Stat. 885 (1966), which is now codified at 23 U.S.C. § 401 et seq. It required all states to create a highway safety program by December 31, 1968, and to adhere to uniform standards promulgated by the U.S. Department of Transportation as a condition of receiving federal highway-aid funds.1 The penalty for noncompliance was a 10% reduction in funding. In turn, taking advantage of broad rulemaking powers granted in 23 U.S.C. § 402, the Department simply adopted the entire MUTCD by reference at 23 C.F.R. 655.603. Thus, what was formerly a quasi-official project became an official one. States are allowed to supplement the MUTCD but must remain in "substantial conformance" with the national MUTCD and adopt changes within two years after they are adopted by FHWA.

The 1971 edition of the MUTCD included several significant standards; it required all center lines on two-way roads to be painted in yellow (instead of white, which was to demarcate lanes moving in the same direction), and required that all highway guide signs (not just those on Interstate Highways) contain white text on a green background. Most of the repainting to the 1971 standard was done between 1971 and 1974, with a deadline of 1978 for the changeover of both the markings and signage.

On January 2, 2008, FHWA published a Notice of Proposed Amendment in the Federal Register containing a proposal for a new edition of the MUTCD, and published the draft content of this new edition on the MUTCD website for public review and comment. Comments2 were accepted until July 31, 2008. The new edition was published in 2009.

Federal Highway Administration (FHWA), Who Uses the MUTCD? And How?:

In the private sector, the construction and engineering contractors who in fact design and build the roads that we all travel each day rely on the MUTCD.

Following are a chart and diagram showing the marking requirements for solid (no-passing) versus dashed lines (passing). 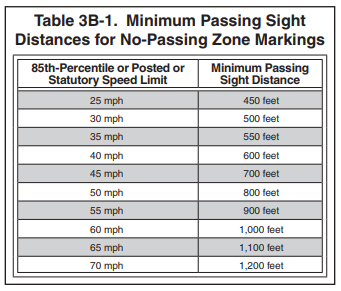 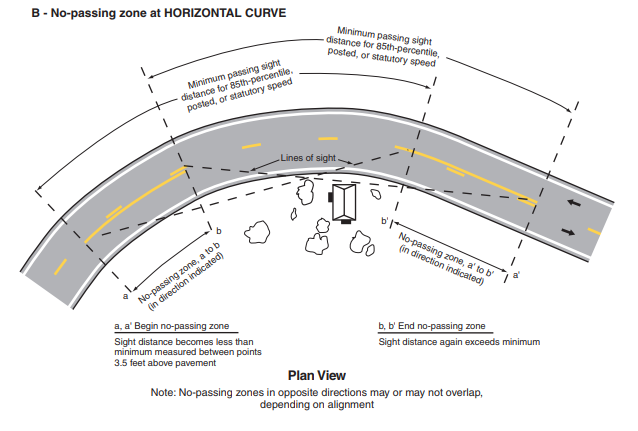 Technological assistance to state and local governments for maintaining roads is provided through LTAP.

Since 1982, FHWA has supported local and rural road agencies across the US by providing training, technical assistance and technology transfer services to help them manage and maintain their roadway systems. The primary vehicle for this effort has been the Local Technical Assistance Program (LTAP), a network of 51 local Centers across the US and in Puerto Rico funded by FHWA.

Many local road departments are managed by individuals who generally have practical experience but little formal technical education or training. LTAP has a variety of tools - training events, technology transfer resources, and personalized assistance - to assist local agencies in improving their transportation operations. Many state transportation departments also benefit from LTAP services. In 2011, LTAP centers trained over 151,000 people in over 5300 sessions.

Not the answer you're looking for? Browse other questions tagged united-states policy transportation .

8
Who determines the speaking order, and who speaks in US congress?
6
Who runs the USA when the presidents are switching?
14
Who and on what basis determines how much US pays for UN?
6
Why are two trend-lines shown with Biden's poll results?
6
Who would win the presidential elections in the US if electors are appointed by State legislatures along to party lines?
4
Who draws county lines?
19
What determines who gets to stay in the Presidential Townhouse / Trowbridge House?
34
Why are opinions on the George Floyd sentence seemingly polarised along party lines?
5
When the US government activates a Civil Reserve Air Fleet (CRAF), can it activate the civilian crew as well, or are they always volunteers?
3
Do American views on national racial issues fall among party lines when controlling for race?