Where might the Iranian-oil-carrying tanker Grace 1 have been heading?

The UK recently seized an oil tanker, Grace 1, carrying Iranian oil into the Mediterranean sea. The UK claimed the oil was intended for Syria, but Iran denies this (e.g. Javad Zarif in this interview, about 15:00 minutes in).

What other potential destinations could the oil have had, other than Syria? What other Mediterranean-accessible states has Iran sold oil to over the past several years?

Note: I'm not asking where the oil was intended to go, just whether there are other plausible destinations. 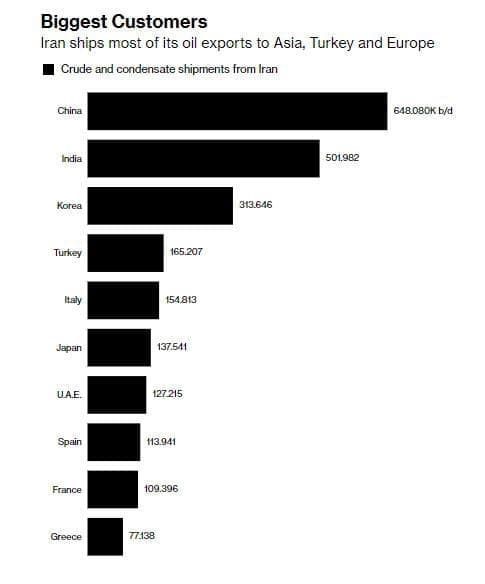 and see also this Financial Tribune piece from 2017 listing specific companies (Total, Royal Dutch Shell, Repsol etc.) as clients. Note there may be oil export taking place to other Mediterranean countries at lower volumes which the chart does not list.

Since, to my knowledge, oil isn't exported to these countries by pipeline (see this pipeline map; although not sure about it being up-to-date), and sea transport probably makes more economic sense than road transport (that's a speculation), and I've never heard of Iranian oil tanker trucks traveling across Europe - it seems that export is happening by sea.

It makes sense that the target country and Iran would not want to draw attention to it being the destination and to be placed in the awkward position of being expected to confront the UK and/or the US about this matter.

Can it be Turkey, though?

On the one hand, it doubly make sense for Turkey to want to hide itself being the destination, because it had announced in May that it was stopping the purchase of Iranian oil to respect US sanctions - so disclosing the fact that the tanker is going to Turkey would exacerbate its deteriorating relations with the US further.

On the other hand - the tanker is known to be Iran-linked; and it's unlikely that any half-decent intelligence service would fail to notice which large oil tankers unload oil in Turkey, i.e. it's almost impossibly to hide, so why make the false statement? Plus, Iran and Turkey have a land border - a long one even. Iran could just send Turkey oil that way (then again - maybe this makes less sense for southern oil fields?)

Not the answer you're looking for? Browse other questions tagged trade iran gibraltar .

6
How much power does the Iranian president have?
21
On what principle did UK seize an Iranian oil tanker? Is there no right of passage for third countries?
20
Have US anti-ballistic-missile capabilities been used and were they effective in countering the recent Iranian missile strike on US bases in Iraq?
3
Why did the US dispossess an Iranian ship carrying natural gas to Venezuela?