Does Iran recognize any of the water in the Strait of Hormuz as being International Water?

The US is claiming that the United States Armed Services are going to ensure passage in the Strait.

"We are starting a concept called Sentinel in which we will have a series of countries engaged to preserve the free and open passage of commerce in the Strait of Hormuz and in the Persian Gulf," US Under Secretary of Defense for Policy John Rood said at the Aspen Security Forum on Saturday.

The UN Convention on the Law of the Sea (UNCLOS) set the convention that all countries may claim "territorial waters" out to a distance of 12 miles from their shoreline. Since the Strait of Hormuz is only 21 miles wide at its narrowest point, this means that there is no longer a corridor of "high seas" in the Strait (and there has not been for some time.)

Complicating matters, the United States is technically not a party to UNCLOS, but does recognize it as international convention. (Their primary objections at the time of the treaty were not over territorial waters but rather over deep-sea mineral exploration.) Moreover, Iran signed the treaty but never ratified it. Oman is a full party to the treaty, as is the UK.

Wikipedia has a map of the Strait of Hormuz. 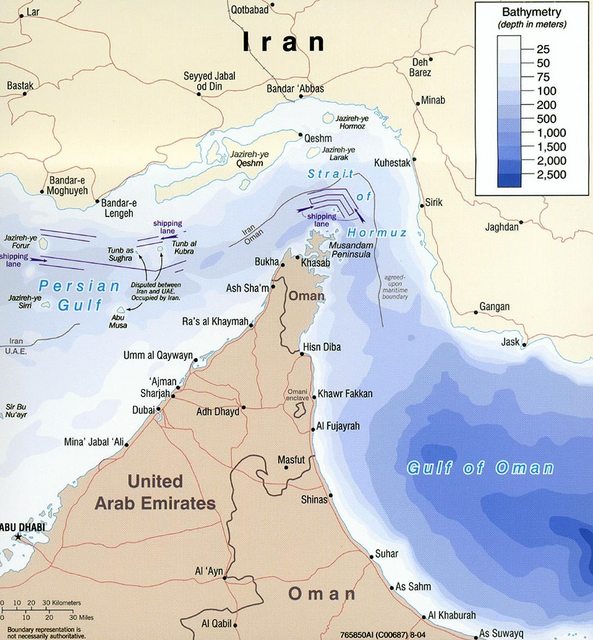 Notice that the Strait is between Iran and Oman. Look at the part of the Strait that says "shipping lane" in Oman's waters. Presumably that's where "Sentinel" will operate with Omani permission. Al Jazeera.

So while Iran doesn't recognize any part of the Strait of Hormuz as being international waters, this program can still operate legally so long as it has permission from Oman and it sticks to Omani waters. Outside the Strait, it might have to get permission from different countries, e.g. United Arab Emirates.

Does Iran recognize any of the water in the Strait of Hormuz as being International Water?

To what degree is that even allowed under international law?

It depends on precisely what is meant by "engaged to preserve the free and open passage of commerce."

Does any of the Strait fall under international waters?

But the free and open passage of commerce through the strait of Hormuz does not depend on any part of it being international waters; rather, it depends on the concept known in customary maritime law as innocent passage.

21
On what principle did UK seize an Iranian oil tanker? Is there no right of passage for third countries?

3
Does Iran violate the JCPOA by developing nuclear-powered warships?
4
Does Iran need to violate the JCPOA agreement to obtain a nuclear warhead?
5
Does the US withdrawal from 1955 Treaty of Amity have any effect on the ICJ's vote about US sanctions on Iran?
4
Does Iran have any remaining obligations regarding UN Security Council resolution 2231 and testing ballistic missiles?
9
Can Iran easily restart the heavy-water reactor construction at Arak, after supposedly it filled with concrete?
1
Can avoiding the Strait of Hormuz (ideally with a canal south of Kumzar) prevent further escalation of the high tensions there?
43
What threat, if any, does Iran really pose to the US?
2
What role does the ideology Khomeinism play in modern day Iran?
3
Does Iran have any trade deals with China and if it does, can they protect Iran's economy from economic sanctions?