What does a black-and-white Puerto Rican flag signify?

In the following NY Times article I noticed that the photo of a large number of people protesting included a fair number of black-and-white Puerto Rican flags as well as a larger number of red, white & blue flags: 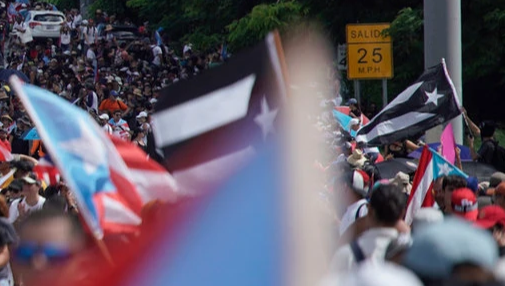 Is there any particular significance to the B&W version?

It was used in 2016 as a symbol of protesting the US’s passing of PROMESA, a law making a board control parts of the island’s economy and having unpopular measures such as decreasing the minimum wage by three dollars. A group painted over a famous mural of the flag with black: 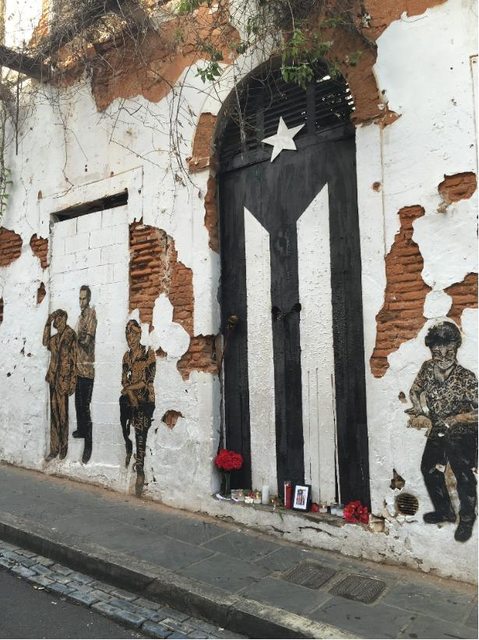 After this, it became used all over to protest budget cuts and the weakening of Puerto Rico’s autonomy. Part of a letter from the people who painted the door (emphasis mine):

The laws, the governors and the courts, up to this moment, have not served in the interests of the people. To replace these colors with black (the absence of light) creates new readings. Ours is a proposal of RESISTANCE, not to be thought of as pessimist. On the contrary, it speaks about the death of these powers just as we know them, but hope is still present in the white stripes that symbolize individual liberty and its capacity to claim and defend their rights.

May this act serve as an invitation to reflect and to take action upon the collapse of the educational and health systems, the privatization and destruction of our natural resources, our colonial status, the outrage against our future workforce, the payment of an illegitimate debt, the imposition of a non-democratic government, the strangulation of cultural efforts among other things. This act is the evidence that there’s an artistic community that is not willing to give up, that will stand up and fight against the impositions of an absolutist government and its policies of austerity; their most recent example: the Puerto Rico Oversight, Management, and Economic Stability Act (PROMESA).

The full letter (scroll down for English

What does a black-and-white Puerto Rican flag signify?

It's a resistance flag. Described in this Mother Jones article, How a Change of Color for the Puerto Rican Flag Became a Symbol of Resistance, July 4, 2019:

But the women felt the door needed an update. It was the United States’ Independence Day, but the artists were in no mood to celebrate. Four days prior, then-President Barack Obama had signed into law the Puerto Rico Oversight, Management, and Economic Stability Act (PROMESA), which imposed a seven-member fiscal control board responsible for managing the island’s $123 billion debt. The board, which is comprised of people who were neither elected nor living in Puerto Rico, was given supremacy over the island’s laws and decision making—a move many condemned as an act of colonialism.

The four women, who are part of an anonymous artist collective that came to be known as La Puerta, identified with a movement calling for Puerto Rico’s independence from the United States. Armed with cans of spray paint and rolls of tape, lit only by the glow of streetlights, they blackened the flag’s blue triangle and red stripes.

Before and after images of the door, Univision, Why did they paint the famous flag door black and white?: 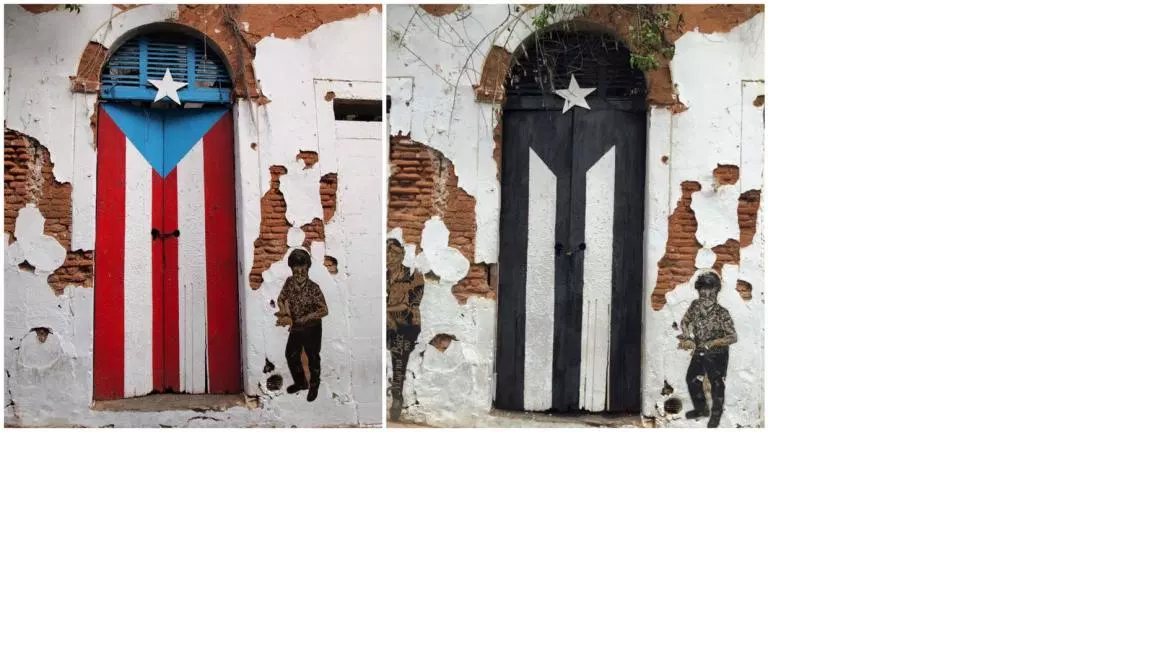 Not the answer you're looking for? Browse other questions tagged flag puerto-rico .

35
If Puerto Rico becomes the 51st U.S state, would the U.S flag be altered to include 51 stars?
2
Puerto Rico's political parties and statehood
10
What is the significance of a black and white Union Jack?
7
What is this 45-star American flag?
3
What flag is similar to the American flag but has 9 stars and 13 vertical stripes?
15
What does the flag of Imperial Germany symbolize today?
13
What are the possible downsides for Puerto Ricans if Puerto Rico becomes a state?
13
What is this flag with a red 6-pointed star in a red crescent on white ground?
14
What is the blue-white-blue horizontal triband flag waved by karateka Sandra Sánchez at the Tokyo 2020 Olympics?