Some world states maintain an "open registry" of ships, allowing non-resident non-citizens to register their ships in that state and fly its flag (a "flag of convenience"), and additionally, do not seem to charge a lot for the privilege of that registration.

I would understand the motivation of opening up the national registry to make an easy buck: Charge an initial and annual registry fee, perhaps even tax by freight value times distance, or something - a clear benefit for what is at least a hassle.

But for those states which meet both criteria - What are their motivations?

Simply put, profit, although the historical reasons vary. All of these registries were begun for specific historical reasons, but now they've become a sort of tradition or national industry, and inertia keeps them going, as well as the economic benefits.

Many of these initial reasons could be viewed as for the benefit of specific larger countries that had a great deal of influence over these smaller countries, as in the case of Honduras and Liberia. However, open registries brought some benefits to smaller countries as well: besides money, they allow small countries to raise their international maritime profile. It's the shipping equivalent of free advertising.

So the historical reasons vary. For instance, at least one purpose of Panama's register was to help US businesses to avoid US laws, whereas Liberia's was originally to allow the US government to avoid international laws.

The first transfer of ships to Panama's register in 1922 involved two US passenger ships wishing to serve alcohol to passengers during Prohibition [Note: this does not appear to be the first instance of flags of convenience in Panama]. More followed as shipowners sought to avoid higher wages and improved working conditions secured through US legislation.

As demand rose for open registration, other countries in the developing world formed their own. The US used Liberia's registry to build a fleet of neutral ships during the Cold War.

Whereas Honduras apparently started its open register at the demand of the US United Fruit Company:

Several years later the small country of Honduras also adopted an open registry but this was largely at the urging of the United Fruit Company, which operated banana carriers to the Central American nation and these were among the few ships to make use of the relatively unknown registry.

One important point is that countries are not always "bullied" into open registries, as it were, but that they can be advantageous for those self-same countries. For instance, in the case of Panama, rather than being pressured by the US or US companies to create anonymous fleets, the first flags of convenience were used to subvert the law of Prohibition for the sake of profit and growing Panama's presence.

The very first ship to fly a Panamanian FOC was the Belen Quezada, a ship used to smuggle alchohol between Canada and the US. However, Spanish ships flying flags of convenience rapidly followed.

The history of the FOC is difficult to trace but most references point to the Republic of Panama just after the end of World War I and a three-masted motor schooner by the name of Belen Quezada that traded along the west coast. With the opening of the Panama Canal in 1914 Panama found itself in a unique geographical position regarding world maritime trade but had few merchant ships, or even merchant crews, under its own flag. Therefore it decided it needed a flag without restrictions concerning owners or crew nationality. By means of law No 63 of 1917 Panama made an amendment to its fiscal code to allow such a registration of vessels in the coastal trades. On 20 August 1919 the 1,141-grt motor schooner Belen Quezada, which was trading between the Pacific Coast and Caribbean ports, was enrolled under the Panamanian flag.

Within months Spanish shipowner Sota Y Aznar, predecessor to Spain's later Aznar Line, made overtures to the Panamanian government for the transfer of several of its ocean-going steamers to the Panamanian flag. This resulted in an Executive Decree dated 7 October, 1921 that the Spanish ships could come under the flag of Panama by paying a registration fee of $1 per net ton and an annual tax of 10 cents per registered ton.

I suspect that currently, economic motivations for open flag registries dominate. It's an easy way for a small nation without a large fleet of its own to build an international presence, raise its profile, and make some money with relatively little effort. Taking Panama as a typical example, simply looking at registration fees the minimum fee is 500 USD and the maximum is $6500. Since Panama at one point recently had over 8,000 vessels, that's anywhere between $4 million and $52 million. That might seem relatively small (although for almost no effort, it's not bad), but if we look at the example calculation given on the website, we see their typical value given when all fees are taken into account, ignoring the new ship discount, is actually $12,000 a year after registration, or about $96 million total. There are likely some hidden fees that the government isn't going to be straightforward about on their website that could drive up the cost more.

Since Panama has a GDP of 60 billion USD, and raises 10% of its GDP in tax revenue, these shipping fees could add up to as much as 2% of their tax revenue, which is pretty respectable. But this doesn't account for other advantages that the register brings in, such as having a huge fleet raising Panama's profile without the government needing to spend a dime, or having ships that the government can use for outsourcing without needed to fund them.

What's more, a country like Panama might have to keep these prices relatively low, to compete with other FOC countries such as Liberia that have lower GDP per capita. Indeed, Liberia makes even more money from the registry: a full 6% of GDP, and seemingly with less effort needed than Panama.

The most prominent states meeting the first criterion seem to be: 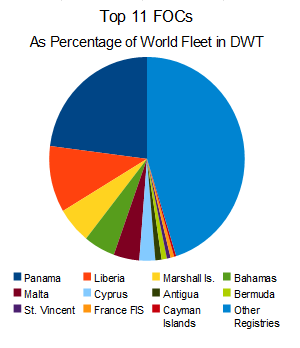 in tonnage, or by number of vessels: 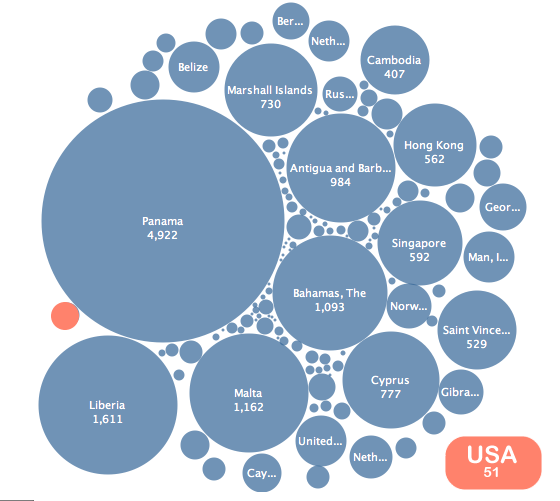 I don't know how many of these meet the second criterion as well; but these all seem to be small countries in terms of population and area, and many of those are at mercy of larger powers who could easily overrun them. Some have special relations with a certain power, like Panama, in which the US meddled a lot (and maybe still does), or Hong Kong which was controlled by the UK and now by China. Perhaps these registries are a way to bypass the "proper" registries of the patron power? Or rather, to bypass the requirements and regulations of the national registry though somewhat-underhanded/corrupt influence over the larger power's "back yard"?

Not the answer you're looking for? Browse other questions tagged trade maritime-law .

3
Why did the US dispossess an Iranian ship carrying natural gas to Venezuela?