Why wasn't the supremacy of EU law codified?

When the Union was born, the European Treaties did not expressly state the supremacy of European law.8

8The 2004 Constitutional Treaty would have added an express provision (Art. I-6 CT): ‘The Constitution and law adopted by the institutions of the Union in exercising competences conferred on it shall have primacy over the law of the Member States.’ However, the provision was not taken over by the Lisbon Treaty. Yet the latter has added Declaration 17 which states: ‘The Conference recalls that, in accordance with well settled case law of the Court of Justice of the European Union, the Treaties and the law adopted by the Union on the basis of the Treaties have primacy over the law of Member States, under the conditions laid down by the said case law.’

Most lay people find referring to a Treaty Article way user-friendlier for a principle, than trying to make sense of multiple court judgments that have disheveled these principles like the exceptions to the horizontal-direct-effect alleged rule? 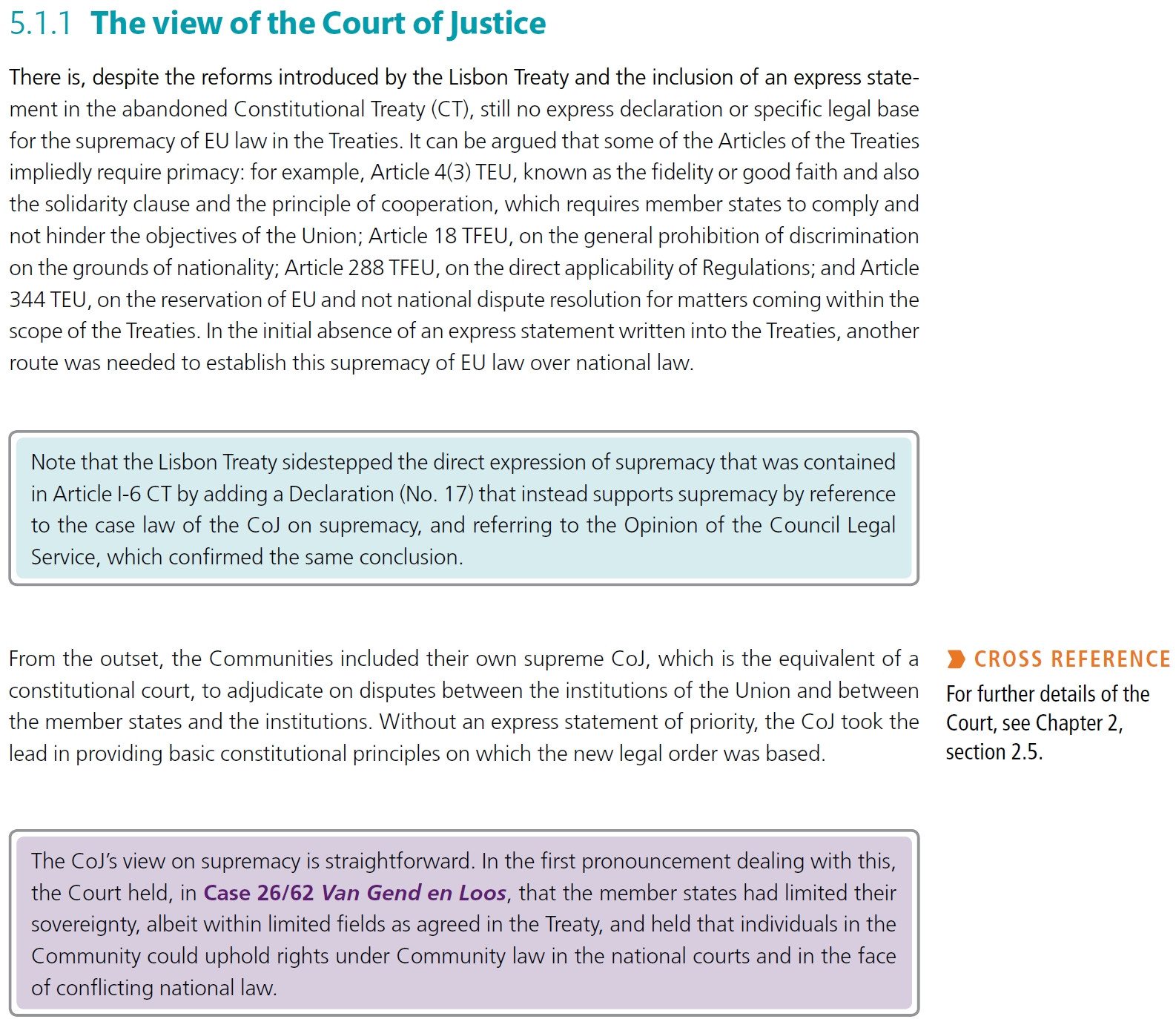 A practical reason was that this was legally impossible. The EU members can only transfer supremacy in matters where they themselves were supreme. This was not an issue in 5 out of the 6 founding EU members, but Germany was (and is) a Federation itself. In matters like education, the German Federal government is not supreme, but the Bundesländer are.

The ECJ could seize this supremacy as they are not bound by Germany's internal power-sharing agreements. The German Supreme Court (Bundesverfassungsgericht) has looked at the matter, but have recorded no decision making either the national constitution or the European treaty supreme, in effect leaving the ECJ supremacy in place for now. The logic was that as long ("Solange") EU was operating following essentially the same principles as laid down in the German constitution, there was no acute need for a decision.

Update: I missed the latest developments on the Bundesverfassungsgericht side. In 2016, in a successor case to Solange, the BVerfG struck down an European Arrest Warrant as being in direct violation with the German constitution, making it explicit that they would not defer to the ECJ on fundamental rights of German citizens.

I'm not able to back this up with documents from the time, though they likely exist, but the main reason I see for this being the case is to remove potential objections to joining. So that the EEA could be as large as possible.

In particular, many countries have sections in their constitutions not allowing the government to bind itself to future decisions made by a "foreign entity". Ireland amending their constitution after two referenda to adopt the treaty of Lisbon is an example of this.

Your question is not terribly clear. Moving the clause to a declaration was part of the ’de-constitutionalization’ process that led to the Lisbon Treaty, so it would appear more palatable to voters than the rejected EU Constitution. There are minor technical differences induced by this change.

However, the main confusion in your question seems to be that the EU doesn't have a supremacy but a primacy principle. The latter means that its actual implementation depends on the good will of member countries, the EU (e.g. ECJ) cannot strike down member countries' legislation.

Primacy is not necessarily to be seen as a ‘hierarchical’ supremacy (‘higher law’) in the sense that the validity of national law would depend on its compliance with EU law. For instance, while the principle of primacy does impose an obligation on the national legislature to refrain from adopting laws that are inconsistent with EU law and a duty to modify laws that are so inconsistent, it does not automatically render such conflicting national measures invalid or non-existent.16 Rather, primacy imposes an obligation on all national authorities to ‘set aside conflicting national measures’ and leave them inapplicable; hence the emphasis, in German parlance, on the fact that EU primacy concerns only Anwendungsvorrang and not Geltungsvorrang. The EU principle of primacy is a conflict rule, indicating which norm should be applied where two inconsistent norms collide. In this respect, the EU version of primacy differs from similar principles in federal states such as the German Bundesrecht bricht Landesrecht laid down in Article 31 Basic Law and the Supremacy Clause under Article 6, Clause 2 of the US Constitution. The EU principle of primacy affects only the applicability of the conflicting national provision, not its validity, on which the EU has no direct say. In ‘truly federal systems’ the federal organs and especially the federal courts do have a direct say on conflicting acts of the federated entities. The EU and its Court do not have such jurisdiction: they can only declare them in breach of EU law, and oblige national authorities to leave them inapplicable to the extent of their inconsistency with EU law. Accordingly, the EU is highly dependent on the cooperation of the national authorities to heed and actually set aside inconsistent measures of national law.

Why primacy and not supremacy is rather simple: many member countries would not agree with outright EU supremacy. I don't think supremacy was ever proposed at EU level.

As a result each EU country has its own doctrinal peculiarities in how it interprets EU primacy. These are far too long to detail here; see the reference below for details. As a general idea: some countries have crafted narrow escape clauses in their constitutions, others use procedural mechanisms to reaffirm primacy, others rely just on their domestic case law (typically at national supreme court level). To give you a relatively simple example:

Article 29.4.6 of the Irish Constitution grants constitutional immunity to European law and to Irish laws enacted, acts done, and measures adopted that are necessitated by the obligations of membership. The provision intends to limit the reach of the Constitution, and prevents the courts from reviewing the constitutionality of EU law, and of Irish law necessitated by the obligations of membership, thus ensuring the primacy of EU law over the Irish Constitution. Nevertheless, in SPUC v Grogan, a case concerning the particularly sensitive issue of abortion, Walsh J stated in the High Court that ‘it cannot be one of the objectives of the European Communities that a Member State should be obliged to permit activities which are clearly designed to set at nought the constitutional guarantees for the protection within the State of a fundamental human right’. So despite the constitutional immunity granted to EU law in the constitutional texts, courts feel uneasy about actually awarding primacy to EU law in cases where it appears to be at odds with fundamental values protected in the Constitution, such as fundamental rights.

The same argument is even more persuasively and more effectively put forward in those countries where the primacy of EU law is not built on an explicit constitutional authorization, but on a reinterpretation of the existing text of the Constitution, usually a transfer of powers or limitation of sovereignty clause.

Examples of the latter include Italy and Germany (law details omitted here, see the reference for that). Clearly since core members such as Italy and Germany would only agree with a primacy with some escape clause, they would not agree to outright supremacy. Another short example is Sweden:

Art 6 of Chapter 10 of the Instrument of Government: ‘Within the framework of European Union cooperation, the Riksdag may transfer decision-making authority which does not affect the basic principles by which Sweden is governed. Such transfer presupposes that protection for rights and freedoms in the field of cooperation to which the transfer relates corresponds to that afforded under this Instrument of Government and the European Convention for the Protection of Human Rights and Fundamental Freedoms.’

As for some examples of the last kind

in addition to the German and the Italian constitutional courts, the Spanish Tribunal constitucional, the Danish Højesteret, and the Polish Trybunal Konstytucyjny have announced that in exceptional circumstances, where EU law interferes with fundamental principles of the [national] Constitution, it will not be applicable

The [national law] cases are cited in the reference.

So I hope you can see why the exact format of the primacy clause at EU level isn't a huge issue. It ultimately depends on member countries to interpret and apply it. When the (failed) EU Constitution was proposed, there was a tempest in a teapot in France and Spain with respect to primacy:

The provision caused quite a stir among both the conventioners and the general public. In order to convince them that such primacy was in fact only the confirmation of the existing situation, a Declaration was added to the Treaty, stating that Article I-6 reflected the existing case law of the Court and did not essentially alter the existing situation. The provision played an important role in the decisions of both the French and the Spanish constitutional courts on the Constitutional Treaty. Both discussed the provision as one of the elements of the Treaty that might change the nature of the Union and make it unconstitutional for the state to adhere to such a Treaty. Both arrived at the conclusion that it did not and that the provision did not alter the nature of the Treaty or the status of the national Constitution as the supreme norm of the land. Both courts also paid particular attention to the national identity clause immediately preceding the primacy provision in Article I-5 to arrive at that conclusion. The French Conseil constitutionnel, moreover, emphasized that the scope of the principle remained the same and was duly accepted by Article 88-1 of the Constitution. The Spanish Tribunal constitucional insisted on the difference between the supremacy of the Constitution and the primacy of EU law. Effectively, both courts opined that Article I-6 did not change the nature of the Union.

As you can see both countries concluded that the explicit inclusion in the (ultimately non-ratified) Constitution didn't really make any difference over prior arrangements. No other countries even raised concerns, apparently.

Not the answer you're looking for? Browse other questions tagged european-union law international-law sovereignty .

6
What are the UK's “constitutional requirements” for Article 50 notification of withdrawal from EU?
3
“The Treaties” in article 50 of the Lisbon Treaty
0
Did the Lisbon Treaty to some degree encode directives that were already in effect, and simply move them into treaty law?
4
Why were the Treaty of Rome's travaux préparatoires not available for thirty years?
0
Simple explanation needed about EU's decisional and normative supranationalism
2
What's the function of Non-addressed Decisions, when Directives already existed?
0
Why doesn't “(unimplemented) directive may never directly prohibit private party actions” mean no HDE in civil disputes on legality of State actions?
0
Direct Applicability v. Direct Effect