English SE and Grammarphobia has the etymology and definition of mortgage. HaggardHawks.com explains the best -

The first half of the word mortgage is the Latin word for “death”, mors, which is the same root as in words like mortician, rigor mortis and immortal. The second half, however, is more obscure: gage is an old word for a pledge or a security that is put down “to ensure the performance of some action”, as the OED explains.

English borrowed the word mortgage from French sometime around the fourteenth century, and it steadily all but replaced (outside of esoteric legal literature, at least) the earlier Latin term mortuum vadium—literally a “dead pledge”. That in turn was paired with a vivum vadium, or a “living pledge”, which referred to someone borrowing money from someone in exchange for their allowing them to use their lands or estate, usually at a nominal annual fee gleaned from the profits of the land, until the debtor was able to repay the money.**

All in all then, a mortgage is indeed literally a “death pledge”—but fear not, homeowners, because it’s not you that’s doing the dying any time soon. Instead, it’s thought that the “death” involved in the mortgage’s ominous “death pledge” isn’t that of the debtor, but rather either the debt itself, or the estate against which the debt is secured. That is to say, by entering into a mortgage, you “pledge” to continue paying your debt until it is entirely cleared (and thereby figuratively “killed”), otherwise your ownership of your estate “dies” if you can’t pay up.

What do mortgages have to do with the "mortgage theory"? Pls see red arrow beneath.

In Stork9, the applicant had challenged a European decision on the grounds that the Commission had infringed German fundamental rights. In the absence of a European bill of rights, this claim drew on the so-called ‘mortgage theory’. According to this theory, the powers conferred on the European Union were tied to a human rights ‘mortgage’. National fundamental rights would bind the European Union, since the Member States could not have created an organisation with more powers than themselves.10 When they thus transferred powers to the Union, the very transfer was subject to the respective ‘constitutional tradition’ of each Member State. This argument was however – correctly11 – rejected by the Court. The task of the Union institutions was to apply European laws ‘without regard for their validity under national law’.12 National fundamental rights could thus be no direct source of EU fundamental rights. 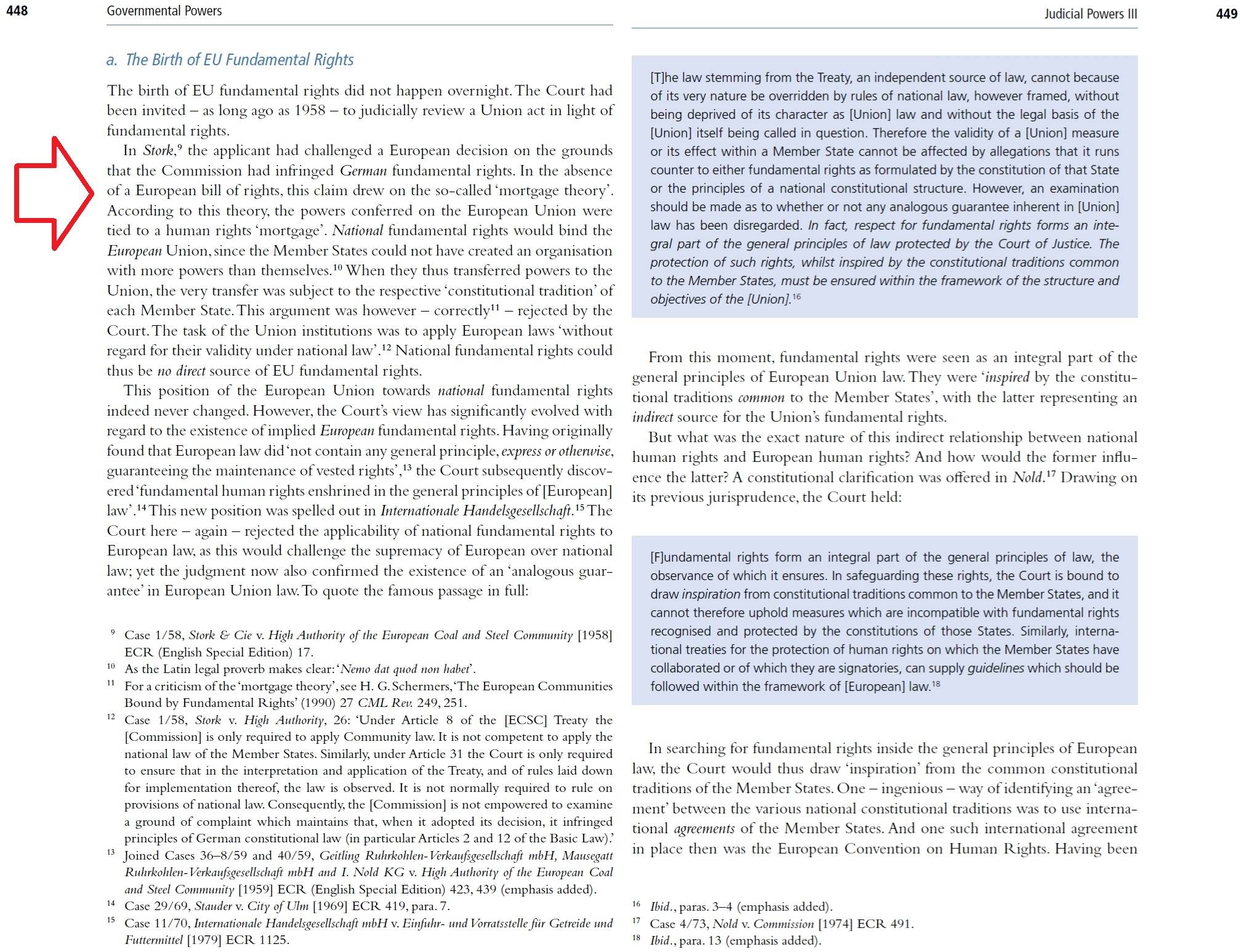 5
Does the EU have any rights to oversee UK elections?
14
Brexit: leaving Customs Union and/or Single Market — what do these things really mean?
3
Is there a case when a European Union infringement related fine is partially paid by an actual person?
9
To what extent can a member of the EU limit certain rights to its citizens only?
8
Does this European Citizen's Initiative have any chance of success?
10
Why did the EU threaten to retaliate over Airbus-related tariffs even after they were allowed by the WTO?