Why does the EU-Turkey customs union not violate the single market principle?

In the Brexit negotiations the EU has rejected the British wish of being part of the single market but without free movement of people. Such a partial free market could lead to unfair competition and therefore threatens the integrity of the single market.

Specific to the statement in question:

In the Brexit negotiations the EU has rejected the British wish of being part of the single market but without free movement of people. Such a partial free market could lead to unfair competition and therefore threatens the integrity of the single market.

These are two separate issues. The one regarding the freedom of movement of people is one of the things the EU sees as the so-called four freedoms, the EU does not like to split those.

The other thing about integrity of the single market and unfair competition is about having the benefits of the EU single markets on goods on the one hand and making free trade deals on the other hand. That's not possible, not just because the EU doesn't want that, it's also going against the most-favoured-nation principle.

With the Turkey deal, the first issue does arise, but with the consent of both relevant parties (the EU and Turkey). The second does not apply, because Turkey cannot make its own free trade deals on the goods that are covered by the agreement with the EU.

Infacts.org has an article on the EU-Turkish arrangement with Brexit in mind. Specifically, the arrangement applies to goods, not services, and with regard to goods Turkey has to follow EU rules. To quote the relevant part from infacts.org:

Unfortunately, there is a catch – or rather, several of them. The Turkish customs union covers only goods, not services or finance. So a Turkish-style deal would be denying us a big part of the single market. What’s more, the quid pro quo of even this limited access is that Turkey has to follow the EU’s rules for the production of goods – without any say on what those rules are. A pattern should be familiar by now: to the extent that a country gets access to the single market, it has to follow the EU’s rules.

Turkey’s customs union with the EU – a key difference from the Norwegian or Swiss models – creates further problems. It requires Turkey to align its trade policy with the EU’s, seeking to cut free trade deals on goods with whomever Brussels makes deals.

This includes having a common external tariff with the EU, quoting from ec.europa.eu:

In addition to providing for a common external tariff for the products covered, the Customs Union foresees that Turkey is to align to the acquis communautaire in several essential internal market areas, notably with regard to industrial standards.

When it comes to Turkey, the EU has split the four freedoms and it's quite an exception (and unique for a country of that size). To understand how this came to be, you have to understand that this agreement came into force a long time ago, back in 1995 (see timeline below, taken from the Future EU-Turkey relations document). Over the years, Turkey has been a candidate for EU membership, and as such, the EU and Turkey have worked on closer integration.

As one can read in that document as well, the EU-Turkey relationship has had its ups and downs, but all that time Turkey has been a candidate for EU membership. In fact, only in February of 2019 did the EU Foreign Affairs Committee vote to suspend that position, from Reuters:

The Foreign Affairs Committee called on the European Commission and member states on Wednesday to formally suspend EU accession negotiations with Turkey, citing disregard for human rights and civil liberties, influence on the judiciary, and disputes over territory with Cyprus and other neighbors.

As for the agreement in place, it seems to be beneficial to both parties and suspending it would not be in the EU's (or in Turkey's) interest. The previously cited report talks about leverage:

That argument obviously applied when there was the prospect of becoming an EU member, but it more or less continues today. The EU wants Turkey to stay aligned as much as possible, and Turkey wants the economic benefit. 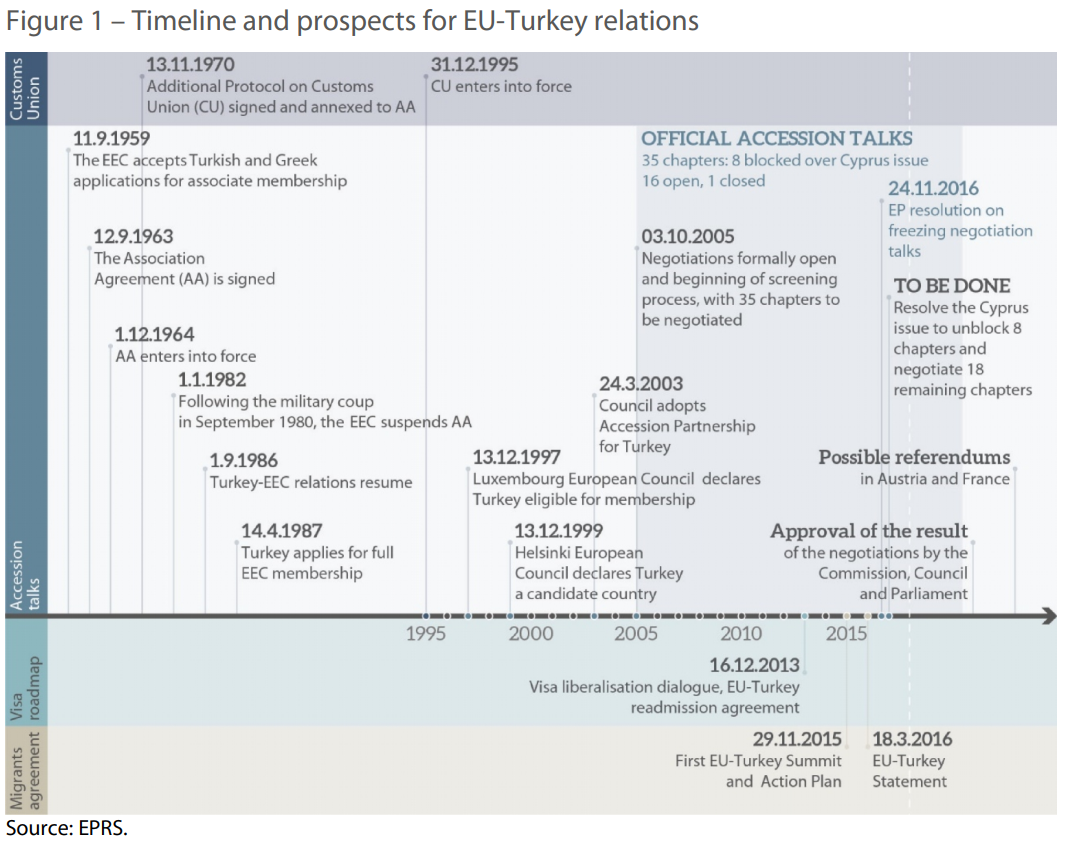 Not the answer you're looking for? Browse other questions tagged european-union brexit international-relations trade freedom-of-movement .

14
Brexit: leaving Customs Union and/or Single Market -- what do these things really mean?
18
Why would it be considered advantageous to negotiate ones own trade treaties?
57
Why is it impossible to leave the Single Market without a hard Irish border?
5
Restrictions on reform to the common agricultural policy by the UK post-Brexit
6
Do nascent exit-movements currently exist within the EU?
8
Separation of the European Single Market and Customs Union
1
How does the opposition to quotas for refugees policies from certain EU countries coexist with the EU "free movement of people inside EU" policies?
3
The Belfast/Good Friday Agreement and the revised Ireland/Northern Ireland Protocol