What is the effect of election campaign donations?

Candidates for the presidential election of the US collect donations in relation to their campaigns.

Candidates are sometimes compared based on the total amount of donations they received.

But what do the numbers actually mean to a candidate?

I see aspects of the campaign that are affected by the availability of money in a simple way. There are expensive technical resources that are expected to increase the rating of the candidate. For example air time in TV, number of print ads.

These seem to scale linearly: Double the money results in a doubled effect. Spending 1000 $ more increases the return by a known estimate.

With this, the candidates compete on a simple, brute force resource based competition. If that is all there is to campaign donations, it makes sense to compare candidates by total amount of donations received, because their probability to win are dependent on the amount in a simple way.

Apart from that, there are other aspects of received donations, and I would like to understand their relevance:

Are some of these, or any other aspects of campaign donation totals relevant?

I would say that in the case of donations, you need to look not at the total dollar value a candidate generates, but at the number of smaller donations generated, to better gauge support. If two candidates are generating $1 million dollars each, but Candidate A has gotten that from a majority of larger donors, while B generates from smaller donors, it's reasonable to say B is a more popular candidate as people who can't afford big donations are donating en mass.

As pointed out, it's a good gauge, but the Presidency is not a straight popularity contest, so it should be taken with a grain of salt. That said, the Electoral College has only diverged from the popular vote in 5 races in the 200+ history of the nation.

There is quite a bit of research out there on campaign spending. Much of it is normative or legal in nature, but there is some good quantitative stuff out there.

Short story: Spending is important. Especially for challengers running against an incumbent.

In a simple sense, spending more is associated with winning more. Abramowitz (APSR, 1988) explored multiple effects on Senate elections in the United States. He tested both cases where an incumbent was running against a new challenger, and open seat elections. It's tough to express their findings in terms of dollars because they adjust the dollar-value of campaigns to reflect both the size of the state and inflation. However, according to their statistical tables it appears that challenger's spending is far more useful for predicting the incumbent's success than the incumbent's spending is! 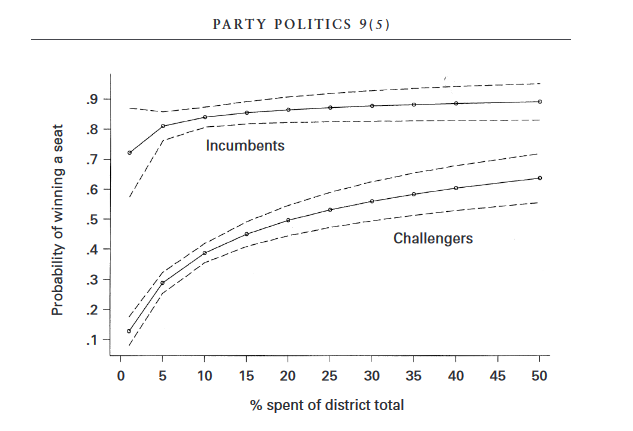 The same result is reflected in the chart from Benoit and Marsh. The line for incumbent spending is fairly flat: there is little marginal benefit to spending if you are an incumbent. on the other hand, the marginal benefits for incumbents can be pretty significant! The effect on the incumbent should be clear - if the challenger can significantly increase their chances of winning based on spending, then that means the incumbent's odds have decreased.

There is also some research about the source of funds. Confirming the importance of campaign spending, Alexander (Political Research Quarterly, 2005) finds that spending one's own funds (self-financing) actually decreases the odds of winning, while PAC spending increases it.

But what about everything else?

The studies above show that there is some relationship between spending and electoral success. But what about all the other factors?

The Abramowitz article cited above tests 16 potential causes. After adjusting for the other 15 factors, a 1 pt. change in incumbent spending results in a 1.31% increase in votes for the incumbent. On the other hand, the presence of a celebrity challenger reduces the incumbent's votes by almost 6%, an incumbent scandal reduces changes by about 7%, concerns about the incumbent's health can reduce their votes by 8%, etc. Spending has a significant effect, but it is not the only - or even the most important - effect.

These seem to scale linearly: Double the money results in a doubled effect. Spending 1000 $ more increases the return by a known estimate.

In terms of campaign rallies, there is some actual data on that from Sabato's Crystal Ball. Campaign rallies slightly helped the candidates. But in both cases, the effect was smaller than the standard error, so not statistically significant.

6
U.S. Presidential Campaign Donations: Must Submit Employer and Occupation
7
What are some of the strongest reasons for allowing private election campaign funding?
3
How do campaign donors in presidential campaigns ensure their candidate fulfills their campaign promise?
11
What's the point of campaign financing limits if external organizations may promote the candidate without any funding limits?
54
Why do candidates not quit if they no longer have a realistic chance to win in the 2020 US presidents election
15
What happens in a brokered convention? Why is the prospect of one seen as a threat to Sanders' presidential hopes?
6
What are the limits on how much Bloomberg could donate to the Democratic Presidential Candidate in 2020?