The meaning of “right” in Italian Fascism

In laying out the foundation for fascism, Giovanni Gentile and Benito Mussolini wrote two essays in the 1920s and 30s known as, "La Dottrina del Fascismo".

Mussolini is credited with the second, "Dottrina politica e sociale" (some sources suggest that Gentile also authored this essay, ghostwriting for Mussolini).

The essays were published in the Enciclopedia Italiana in 1932.

Here's an excerpt from Mussolini's "Dottrina politica e sociale" that is the subject of my question:

The first and only authorized translation of Mussolini's essay was written by British author and historian Jane Soames. Her work was published in 1933. Here's her interpretation:

Why did Soames see "Right" to mean "Left"? 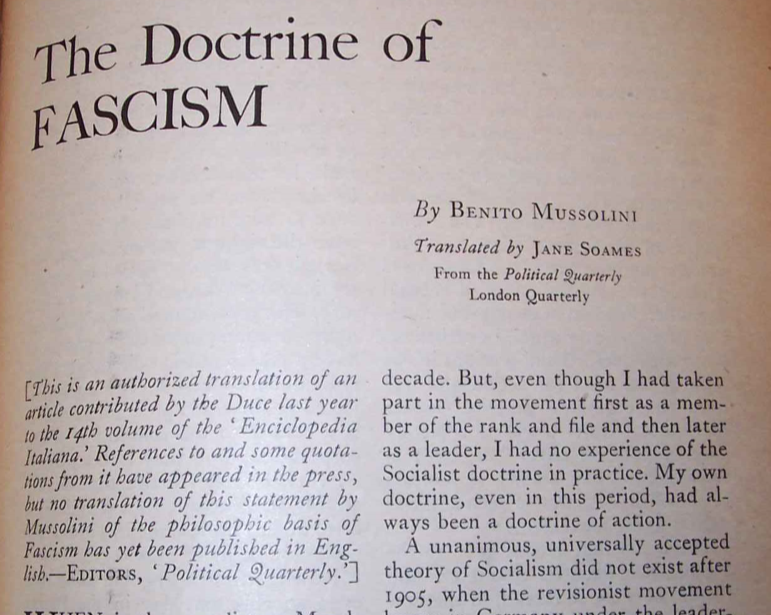 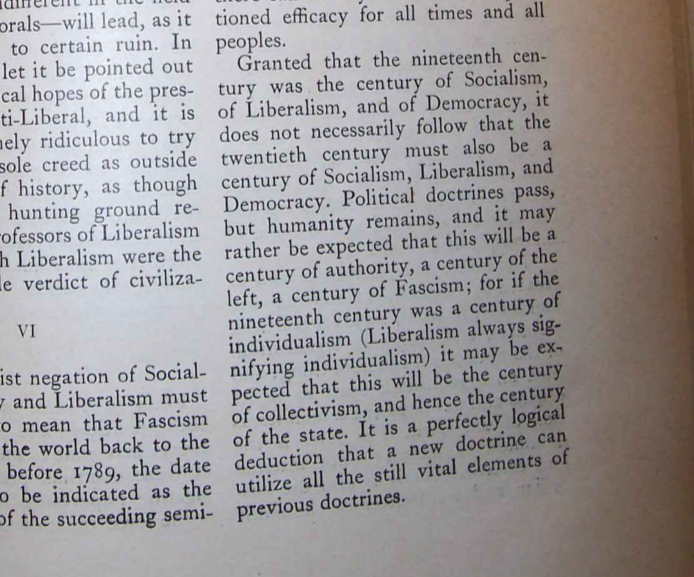 In researching an answer to this question I discovered various related discussions online, including one post on Skeptics.SE.

All of these discussions have two things in common:

For example, in the Skeptics.SE post, the author of the primary answer asserts "This is a mistranslation", but later admits,"I have been unable to discover how or why Soames managed to mistranslate "destra" as "left". Not authoritative. Not referenced. Not complete.

It's easy to make the claim that Soames was sloppy and incompetent. If you consider the full context, however, buying into that theory is not so easy.

So if we look at the bigger picture, and make the reasonable assumption that somebody of her caliber is unlikely to make such an elementary mistake, why would she choose "left" over "right"? Thank you.

It's important to note that we are reviewing Soames' original work. I have posted images above of the pages from Political Quarterly (1933), the hard-copy publication containing her translation.

Not so for Mussolini. All discussion about this matter – in this post and other online discussions – is based on digital copies of his essay (I've listed three sources above in the Italian language section). I'm not saying these digital copies are incorrect or corrupt. But for the sake of verification, I will attempt to post images of Mussolini's original essay in the Encyclopedia Italiana (1932).

Note that the 1933 booklet that Jane Soames supposedly translated was published by Leonard and Virginia Woolf. Leonard Woolf was known for his left wing (not fascist) leaning. In fact he deplored fascism as early as 1935. Here's a quote to that effect from a 2018 PhD thesis

Additionally, Leonard edited a set of essays for Victor Gollancz (founder of the Left Book Club in 1936), The Intelligent Man’s Way to Prevent War (1933), which outlines the aims of a number of leftist movements in Europe and advocates the League of Nations as a “road to peace,” reprinting the League’s founding covenant at the end. Its title frames the central question of Virginia’s Three Guineas—how to prevent war—and Leonard’s introduction emphasizes that “War is not a ‘natural’ catastrophe … It is not inevitable; it is preventable in Europe [by way of] … civilization.” In 1935, Leonard traced in Quack, Quack! the “primitive” elements of Europe’s re-descent toward barbarism, represented politically by Mussolini and Hitler and philosophically by Spengler and Bergson. His studies continued once civil war broke out in Spain, and with the flood of pro-Republican propaganda from the Left Book Club, the Labour Party, and numerous small publishers, the British left coalesced as what Neal Wood calls Britain’s “nearest equivalent of a popular front.”30 With its multi-faceted advocacy of an internationalization of the Spanish Republic’s freedoms, Bloomsbury’s work exemplifies the conviction that the battle for Spain was part of the battle for civilization in Europe. Their vision of what Christine Froula describes as “modernity’s permanent revolution,” which sought to “reclaim the purpose and vitality of the Enlightenment project” against twentieth-century barbarism and war, now extended to Spain and to the project of refashioning the country within a new Europe.

(Emphasis mine.) Virginia would also publicly deplore fascism a bit later in 1938.

Her 1938 book Three Guineas was an indictment of fascism and what Woolf described as a recurring propensity among patriarchal societies to enforce repressive societal mores by violence.

How the first "authorized" translation of a fascist tract was published by ideological enemies of fascism is a bit beyond me... but not completely.

There's a much more in-depth article on the early days of Hogarth Press, and it does mention that fostering political discussions on timely topics was the Press' self-given mandate, but alas the 20-page article doesn't say much about Mussolini's work translation. There's a list of political publications in the Day to Day series considered noteworthy on pp.73-74 of the paper, but Mussolini's work is only briefly mentioned as

Benito Mussolini's The Political and Social Doctrine of Fascism (1933; the most aberrant of the Hogarth pamphlets) Arthur Ponsonby's tract of Disarmament (1932), and Leonard Woolf's the League and Abyssinia (1936), among others, posed the globe rather than the nation as the site of both auspicious and threatening political battles.

Make of that "most aberrant" what you will; it's not explained any further in the paper. The paper does mention (p.72) that the Day to Day series of political pamphlets had low sales, despite Leonard's expectation that they would be successful. I guess that also means that few people back then even read the "authorized" translation of Mussolini's tract.

Also, since Wikipedia has such a sketchy bio of Jane Soames, the official translator... I checked her WorldCat page. I could find no other translation from Italian among her published works listed there. In fact it's hard to find any other translations by her from any language, besides this Mussolini work. (I did find one other work of her's that is a translation "The Causes of the World War. An historical summary", which is a translation from French; the original author of that book being Camille Bloch.)

Not only Wikipedia says that

Fascism (/ˈfæʃɪzəm/) is a form of radical right-wing, authoritarian ultranationalism characterized by dictatorial power, forcible suppression of opposition, and strong regimentation of society and of the economy which came to prominence in early 20th-century Europe.

Mussolini himself wrote that in his native tongue Italian.

The Skeptics post is referenced in going ad fontes and comparing the Italian original with this Soames translation. If you compare other translations, also into other languages, it becomes very clear that Soames made a mistake here. Such things happen and can be found in the bible as well. Demanding corrections for that usually takes a few centuries…

It might be a deliberate decision by Soames to change the words and thus meanings. But that seems unlikely.

A simple scribal error is much more probable and the simpler explanation. The translation is in error.

Google translates that as

One may think that this is the century of authority, a century of "right", a fascist century ...

And interestingly in Noel O’Sullivan: "Fascism", London: Dent, 1983, p138, we read that Mussolini ordered in 1940 all remaining copies of the document, which had different editions and different translations anyway be retracted, 'because he changed his mind about certain points'.

How can such an error occur, even if the author is otherwise trustworthy, well respected?

The most common types of alteration made by scribes to the texts that they copy are these:

Of Omission:
homeoteleuton: the scribe paused, then resumed writing but skipped ahead because of the similarity of the endings of two lines, thus leaving out a passage.
homeoarchy: eye-skip because of the similarity of the beginnings of two lines. haplography: copying once what appeared in the exemplar twice ("pewterer" reduced to "pewter," or "that that" reduced to "that").

Of Addition: dittography: mechanical repetition, by trick of memory ("that that" when original had only "that").
contamination: extraneous element from elsewhere appears on the page.

Of Alteration:
unwitting.
Unwitting mistranscription: the First Folio Anthony and Cleopatra, in V.ii.87, gives "an Antonie twas" where Shakespeare had written "an autumn twas"; the typesetter "saw" "Antonie" there, partly because the name had appeared so often already, and partly because it made "sense" in the passage, so the initial error was not immediately caught.
deliberate: the scribe acts as editor to correct and improve the original.

This means that a number of psychological errors is greater than deliberate politically motivated alterations. Given that the original spoke of socialism multiple times before the error, I guess it's easily explained.

What is an authorised translation?

What is an authorized translation?

It is a document which has been translated or verified by a translator authorized by the Ministry of Justice from Romania and it bears his/her stamp and signature.

Attention! The authorized translation cannot be subsequently certified! It has to be requested even from the beginning at the translation office.

Wikiquote is only needed to clear up the English version of Soames text alone, no other language features this debate, as the original says "right" and all follow-up errors in English seem to depend on Soames:

"depending" meaning here for example The Challenge To Liberty by Herbert Hoover, p 66.

But this was evidently not the only English version in circulation, as other English speaking fascists preferred the correct ("right") translation at the time.

It seems unfounded to suspect that "authorisation" means 'proofread by Mussolini himself for correctness before or after it went into print.'

So it seems that instead of requesting errata to be published in what Soames had permission to do, the Fascists decided "if you want it 'right' do it yourself"?

That this small error of Soames now feeds confused English speaking pundits that want to distract from their own right-wing extremism and thus closeness to fascism is tragic. But the fascist Mussolini simply wrote about his movement's promising future as "a century of the right", since he knew and told honestly what he was when he wrote that down: a fascist and thus a right-winger.

Right and left had different meanings. For example,

"Left-Wing" Communism: An Infantile Disorder is a work by Vladimir Lenin attacking assorted critics of the Bolsheviks who claimed positions to their left. Most of these critics were proponents of ideologies later described as left communism.

The original meaning of "left" was the left side of the French parliament, which was antimonarchy. The "right" before about 1930-40 was antidemocracy- which is why, for, example, there was a split between Churchill's pro-pension Tories and the Liberal left in the 1925 budget, or the anti-tariff Democrats in the 20s who cut public services. In the majority of Democratic countries at the time, the "left" was what would be described as free market liberals today, so "right" and "left" had opposite meanings. Remember that the common man in this time was a farmer, and economic theory was not relevant in the same way.

So the only possibility, besides a typo, is that the author was writing at a time when the terms were in such flux they weren't important.

In English, collectivism is left wing. So the simplest explanation is that Soames correctly translated the meaning of the statement rather than trying to translate literally. Other translations translated this literally.

Not the answer you're looking for? Browse other questions tagged political-theory government italy fascism .

1
Do new Italian citizens get to vote for the Senate?
5
Can fascism exclude traditionalism?
5
Is fascism left or right wing?
2
How has the United States reacted to the 2018 Italian general election?
6
How is the European Union trying to adapt to Italian Mafia extension in other EU countries?
10
How much do the Italian and Chinese COVID-19 lock-down measures resemble each other?
4
Understanding how Fascism showed that direct government is not same as self-government