Why are two trend-lines shown with Biden's poll results?

Looking at the poll numbers shown by realclearpolitics.com for the 2020 Democratic Presidential Nomination. Specifically, Biden's poll numbers seem to have two trend-lines instead of one. One hovers 29-34 and another distinctly lower between 22-26. To put it another way: since 7/1 he has 18 results in the 29-34 range and interspersed, you'll see the occasional blip going down to 22-26. Since 7/1 there are only 8 results in the 22-26 range. Going back further seems to show the same high/low pattern. 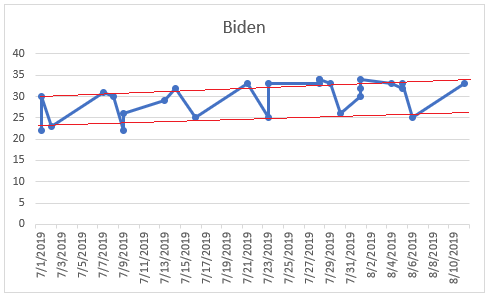 Why are the two trend-lines for Biden's poll results?

Not the answer you're looking for? Browse other questions tagged united-states presidential-election joe-biden polling .

8
Why are the candidates allowed to speak after their two minutes runs out?
3
Why are there two white bins inside a voting machine?
14
Why are politicians more interested in Russian/WikiLeaks interference with US elections than they are in foreign governments that openly take sides?
6
Why are there separate investigations into Trump's alleged collusion with Russia?
1
Why are there only 36 US states with governor elections this November?
3
How to convey poll results with shifting demographics?
5
Are the partial results announced in Iowa consistent with prior polling in the state?
1
Why are Japan and South Korea two topmost lobbyist in the USA?
35
Why are opinions on the George Floyd sentence seemingly polarised along party lines?