Was the Russian Federation ever an actual democracy?

Currently, it is a pretty established fact that Russia isn't a democracy. According to the vast majority of American news sources covering last year's Russian elections there, they are fake. However, the Russian Constitution ostensibly is one of a democracy, from what I know of it. I know that Putin has made major changes to the Constitution.

Did the modern Russian Federation ever work as a democracy? Or, since it replaced the Soviet Union, has it always had fake elections, major de facto and/or de jure restrictions on freedom of speech, etc.?

democracy russian-federation authoritarianism
Share
Improve this question
edited May 29, 2020 at 19:03

If we use the Democracy Index to quantify the level of democracy in a country, the answer would be no in the time from 2006 till today. The main problems nowadays in Russia are:

Sadly, I have no data prior to 2006 right now, but I assume that Russia never was a "full democracy". But by this definition, neither is the US.

To add to the answers above, the Democracy Index ranks Russia as an authoritarian regime. 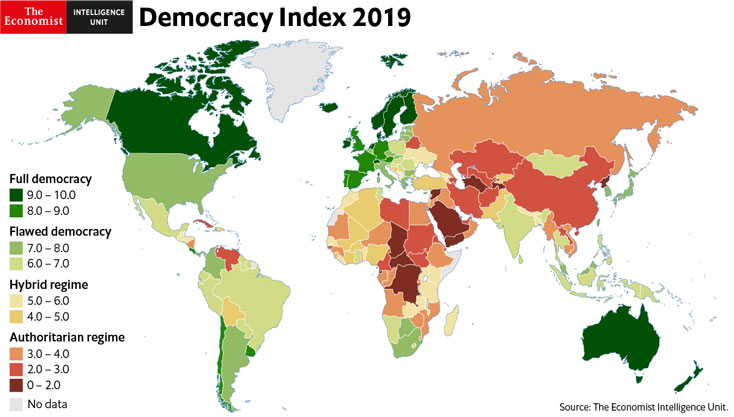 Basically, Russia ranks as a 3.11 as of 2019, making it an authoritarian regime by the indexes' standards and below a flawed democracy like the United States or even a hybrid regime like Liberia. The index is based around "60 indicators grouped in five different categories, measuring pluralism, civil liberties and political culture". While it is not a perfect indicator, it is the closest thing I believe we have to attempts to objectively measure how 'democratic' a nation is.

The 1996 election, the first since the breakup of the Soviet Union, was the only Presidential election that went to a runoff. Boris Yeltsin finished with the most votes, but far short of a majority. He faced Gennady Zyuganov in the second round, and won by a 54-41 margin (with 5% voting "against all").

All subsequent elections were won by the incumbents (or their hand-picked successors) in the first round:

Not the answer you're looking for? Browse other questions tagged democracy russian-federation authoritarianism .