Where can I find the authors of the various drafts of a bill?

This answer to this question contained some text from a former state legislative staff person:

As a former (state) legislative staff person myself, my own experience is that the people who draft bills/resolutions are typically committed to a kind of neutrality...

According to this person, there are multiple people who have the role of drafting bills for a legislator. This got me asking the question...

Where do I find who officially drafted an early form of a bill?

At least in my state, you can't. The bill is officially linked to the legislator who introduced it, not the person who wrote the text.

When a bill is introduced it bears the name of the legislator who introduced it. There is no mention of the staff that wrote the text (a short example bill is below). In Kansas this work is done by the Revisor of Statute and they won't tell you which particular staff member worked on a bill. The closest you can get is seeing which staff typically work in which subject areas. 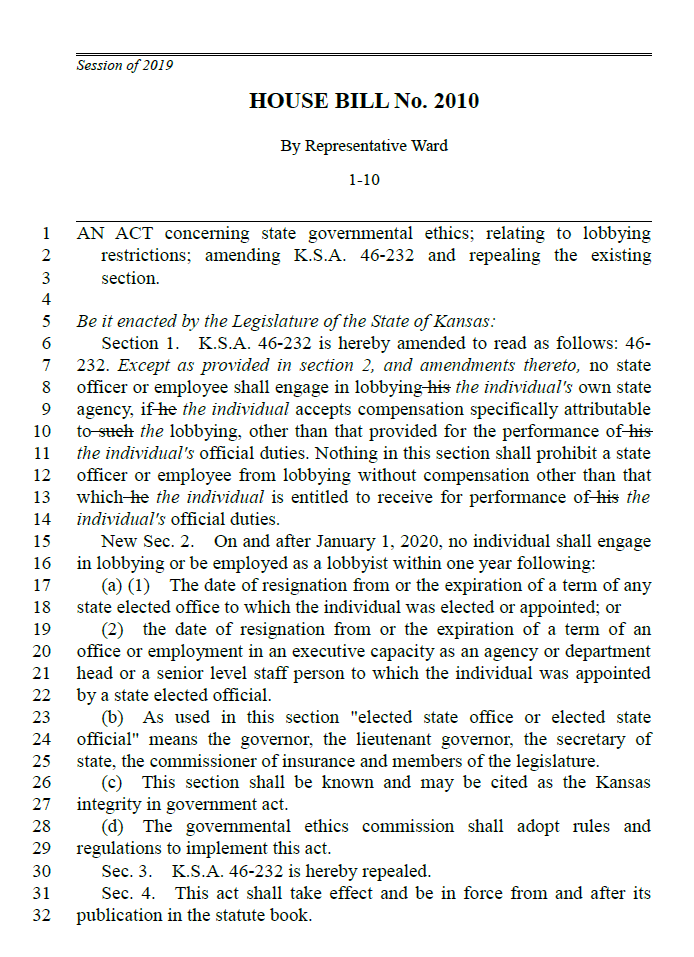 Why isn't this information public? The legislator is accountable for the content, not the staff. The staff who write the bill don't determine what the policy goals are or how to accomplish it. They write the bill the legislator wants, and they provide some technical legal assistance to help it gel with other statutes.

You would have to ask the individual legislators (who are under no obligation to disclose pre-decisional deliberations of their office) and/or monitor committee discussions of the particular bill.

Bills are effectively entered into the congressional ecosystem as creations of the named author. There's no record of which lobbyist may have previously asked for a particular provision to be included, or which staffer may have struck out a line.

Not the answer you're looking for? Browse other questions tagged united-states legislative-process .

0
Does each different kind of Congressional act require a different level of rigor?