Can the Government hold a vote of confidence in themselves with the intention of losing?

Borris Johnson has failed to get an early election. However, I’m aware that a vote of no confidence in the government would also lead to a general election if no other party could win a vote (which seems unlikely): 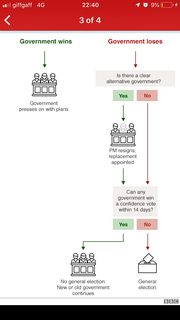 Can the government call a vote of confidence which they intend to lose, and then have that election?

Whether this is a good idea is debatable, (consider them trying to campaign when they have effectivly said that they have no confidence in themselves) but they could trigger a vote.

Not the answer you're looking for? Browse other questions tagged united-kingdom election .

15
How long can a vote of no confidence against the prime minister be delayed or avoided?
5
Would a Government who lose the confidence of the House really delay an election until after the event over which that confidence was lost transpires?
1
Were three-line whips more (or less) common before the Fixed-term Parliaments Act?
5
If the opposition wins a No Confidence vote in the week of April 8, 2019, could they stop No Deal?
6
What happens if a UK government loses a no confidence vote just before a parliamentary recess?
10
According to UK government, Parliament cannot stop a no-deal Brexit: Could this also be used to push through the agreement agreed by Theresa May?
8
Is there any timeframe restriction for scheduling an early election under the Fixed-term Parliaments Act?
3
Why would Boris Johnson not try to call an early general election by 'ordinary law' at this point?
5
What happens if the UK government refuses to function or carry out its duties?
4
Why can't (doesn't?) Boris Johnson resign?