Is there any study linking ignorance to political preference?

I was talking with a friend of mine and we got to a realisation that ignorant people (those uneducated) tend to look for the politicians of a specific side of the political spectrum in contrast to the intellectual people (those educated) which instead prefer the other side.

I was wondering if there is any study connecting education level to political preference.

As pointed out in the comments "ignorance" is a rather broad and fuzzy term.

However, if we take it to mean the lack of formal education (more easily measured, and apparently assumed in the body of the question to stand for ignorance)... then results do vary by country. E.g., 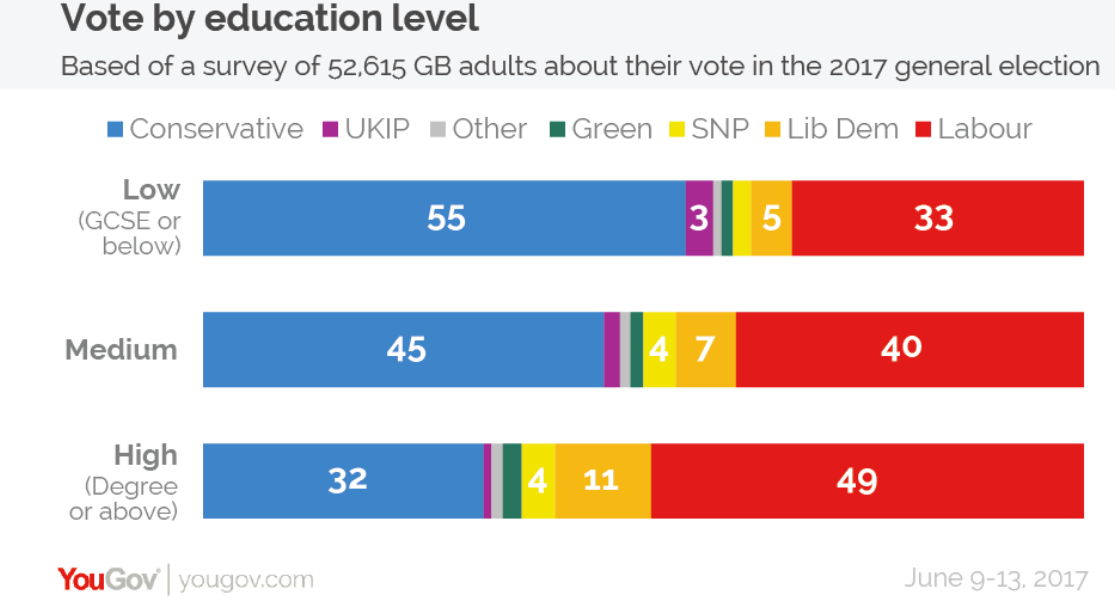 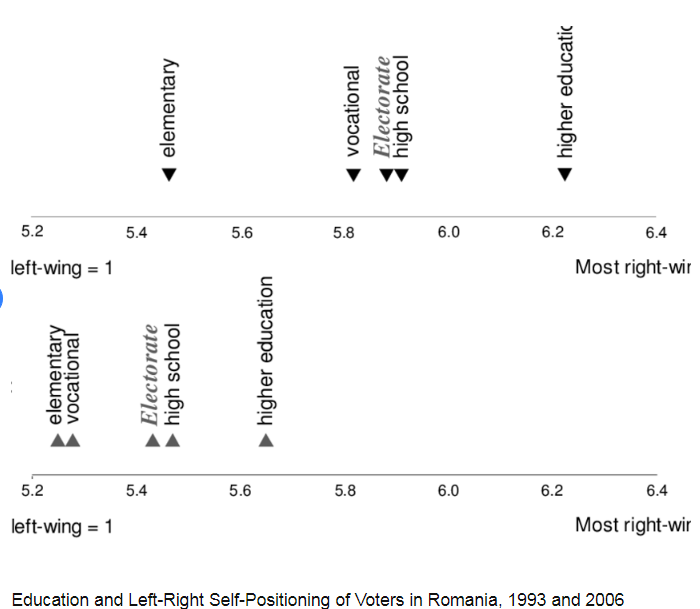 So it's probably hard to draw a universal conclusion from this.

Also, the latter paper points out that there can be substantial repositioning of the voter preference (as function of education) in the same country and within a generation, illustrating with France 1988 vs 2002: 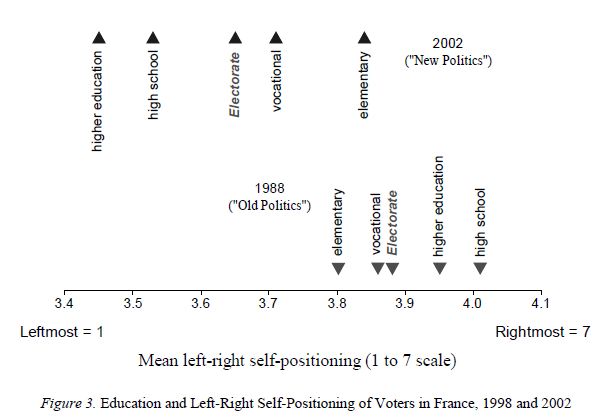 There's a subsequent graph in the paper (I'm omitting here) that this self-declared reorientation of the electorate is consistent with their actual votes in the presidential elections in those years in France.

There's also a study that attempted to map this (left-right orientation vs education) world-wide. Its only firm conclusion was that

Their grouping of countries may be a little questionable, but it does seem to support their conclusion. (In order to make the countries comparable, the left-right orientation is based on answers to some value questions, rather than being self-declared.)

There are studies that show Democrats are more likely to believe astrology is science. And the majority, 51%, of Democrats don't know that the earth revolves around the sun.

32% of Republicans don't believe in evolution. [Same source]. While Tea Party members are better educated than most.

Economic literacy is pretty much a wash.

The new results invalidated our original result: under the right circumstances, conservatives and libertarians were as likely as anyone on the left to give wrong answers to economic questions.

And I found this point utterly fascinating. Moderates fear scientific change more than those that identify as conservative or liberal.

What sorts of people fear scientific and technological development? This paper tests the common theory in political and social psychology that conservatives fear scientific change. Using data from 25 national cross-sectional studies of the adult population with 32,756 subjects, I find that conservatives and liberals both are more positive to scientific change than political moderates. Thus the results are inconsistent with one of the main pillars supporting the field of conservatism research.

EDIT: Previously I concentrated too much on issues of education/IQ vs. views. I think that I (and other answers) missed the key point - what would happen with views if you give people issue specific knowledge.

EU run a trial of deliberative democracy, with providing people with extra info and give a chance to rethink. They achieve a moderate shift towards pro-green, tiny towards acceptance for migrants (unless they are Muslim, then no change in negative attitudes) and drastically much pro-EU views. (sure, there may be an issue concerning to what extend EU is perfectly objective while teaching about EU or its policies)

However there is also an opposite result observed, called pending on political views as "internet radicalisation" or "red pilling". It's somewhat interesting that even people who are worried about it like prof. Steven Pinker, admit that mentioned information are technically speaking correct, but often unknown as taboo subject, just the interpretation is too far reaching:

When they are exposed the first time to true statements that have never been voiced in college campuses or in The New York Times or in respectable media, that are almost like a bacillus to which they have no immunity

As liftam pointed out, there is indeed electorate of let's call it simple right wingers with simple answers. (called in the article politely as: racist, homophobic, authoritarianism) With increase of IQ, those attitudes become less prevalent.

To make it a bit more complicated - for example in the US Democrats are overwhelming successful 90:9 in getting votes from Blacks. Let's say that according to SAT score it would be a bit tricky to consider them as the most educated electorate. Just a minority issue? Well, among Asians who outperform Whites Democrats get nice result of 77:23, so better educated minority was not actually reducing the edge.

Right wing tends to earn votes of the group that scores the highest - classical liberals. With increasing IQ there is an increase of support towards personal and economical freedom. Especially in era of political correctness this group reluctantly pick right wing.

Interesting paradox from the US, relation between freedom of speech vs. PC. When electorate of those parties are better educated... then their views diverge even more.

OK, anecdotal evidence - it seems that ideologies seem change within with increased education. For example, among higher educated right wingers instead of denying anthropogenic global warming, it's considered as real issue, which was blown up out of any proportions by activists and hype seeking media. Among higher educated left winger, however nuclear power plants are no longer source all evil, but a reliable and potentially cost effective way of reducing carbon emission. So paradoxically, in this case a common ground starts to appear.

Not the answer you're looking for? Browse other questions tagged political-theory political-research political-science .

1
What does the Economist mean by “liberal graduates, conservative school-leavers”?

22
Is there any data on how much gerrymandering influences incumbent advantage?
11
Is there any form of political system using math, informatics or psychology as a basis for decision-making?
2
Is there a scientific political ideology?
7
Is there a political theory of running state without politicians?
2
Are there political proposals to jail/fine parents of a minor guilty of murder?
8
Are there standardized ways to quantify political division?
0
Does any country “filter” otherwise eligible political candidates?