Why won't the U.S. government end all fuel subsidies?

A new study, the G7 Fossil Fuel Subsidy Scorecard, measured the US against other G7 countries on each country’s progress in eliminating fossil fuel subsidies. The US ranked the worst out of the G7 countries, spending over $26 billion a year propping up fossil fuels. (The G7 countries are Canada, France, Germany, Italy, Japan, UK and the US.)

Why won't the U.S. government end all fuel subsidies? Is this simply a result of the oil lobby, or does the oil subsidy serves some sort of geopolitical interest? What are the political/geopolitical advantages of maintaining a large fuel subsidy for the U.S.? Given other countries spend a lot of money on oil subsidy, something tells me there must be a good reason for this.

The answer(s) to a question like this are pretty obvious and not unique to the oil industry:

The United States became the world’s biggest oil producer in 2018, and over the next five years, the nation will take aim at becoming the top oil exporter, according to the International Energy Agency.

IEA forecasts U.S. exports of crude oil and petroleum products will nearly double, hitting about 9 million barrels per day by 2024. At that level, the U.S. will surpass Russia’s shipments and threaten to unseat Saudi Arabia, the current top exporter.

Whenever you have lots of people employed and/or exports are involved, you can expect subsidies...

If you read the official US rationale(s) instead, they center on national self-sufficiency in energy, like preserving national production capabilities despite price fluctuations on the global market(s).

Also, the figure you have advanced for the US subsidies ($27B) seem pretty large given what I've seen before: 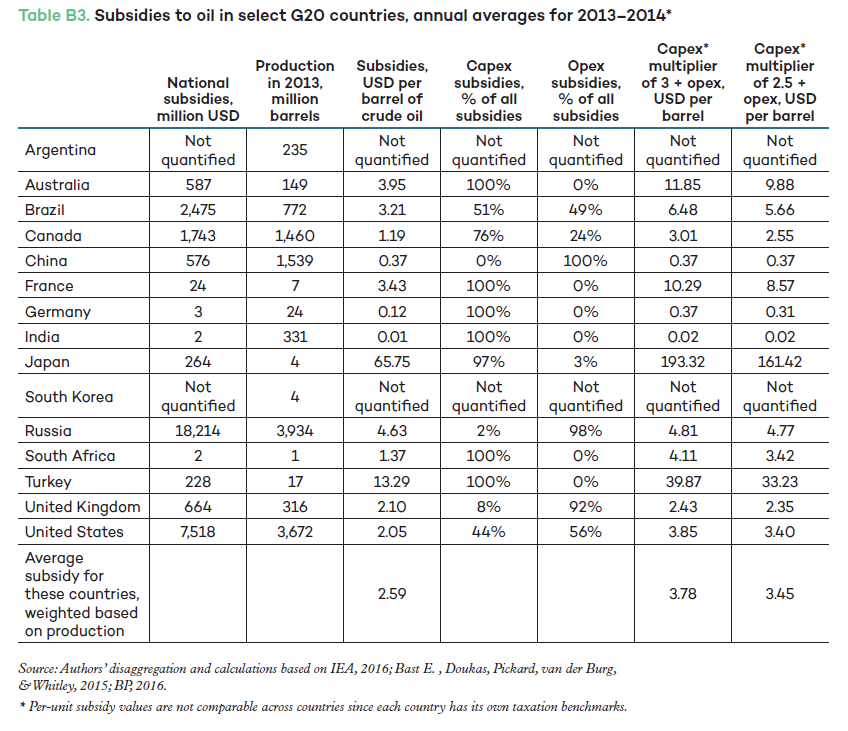 There are fossil fuel subsidies on the consumer side as well (with the usual reason of providing social protection to those who can't easily afford heating oil etc.), but I'm not sure adding those would give the figure from your study.

From the actual ODI study, which seems the actual source of that "G7 scorecard" and $27B figure, I see the figure includes all fossil fuel subsidies, including consumer subsidies (as I suspected it would). 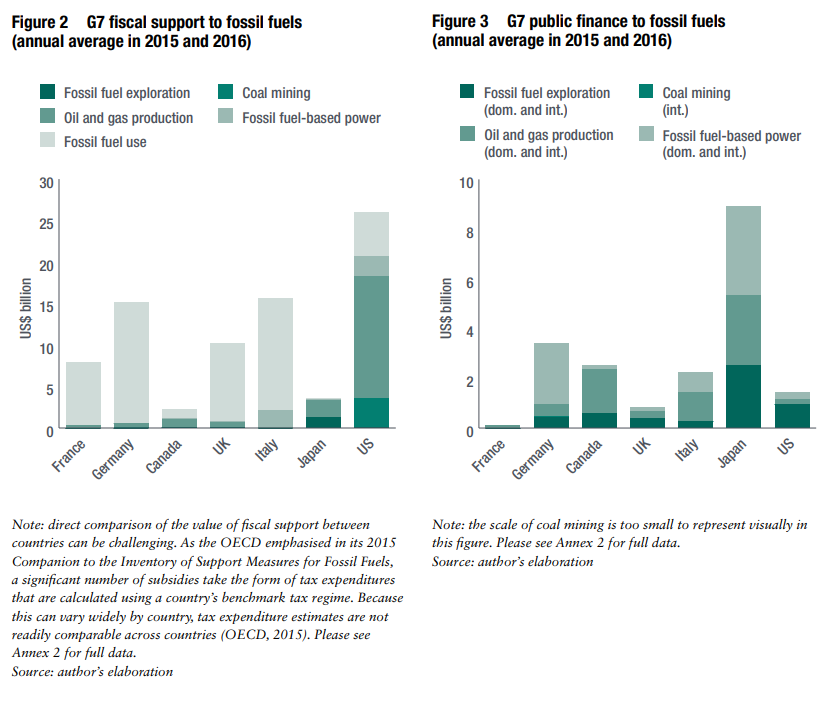 I will not try to argue like K Dog that this study is Chinese or Russian propaganda, but there is an obvious criticism to using this ODI study to single out the US: most other significant oil producers are not in G7. From the G20 countries data (previous table), Russia had higher (than the US) oil-production subsidies for the years considered in that study.

Additionally to Fizz's excellent answer, it's worth mentioning the obvious political reason: the current US government doesn't want to end or reduce fuel subsidies.

The main reason why other G7 countries try to reduce their fuel subsidies is global warming, and this is part of their objectives as signatories of the Paris agreement. On the contrary, Trump's administration made the US withdraw from the Paris agreement and supports the traditional fossil fuel industry. Additionally Republican voters tend to be much less concerned by global warming (if believing in it at all), and such a policy would undoubtedly cause a major backlash.

So politically speaking the current US government has absolutely no reason to reduce fuel subsidies.

Basically an add to Fizz's answer. Large industries certainly draw subsidies. But there are a couple of nuances worth pointing out, largely to do with GAAP accounting and tax law in the US as it applies generally to business operations in the United States, and those that apply specifically to oil, gas and mining.

The reason for this nuance is that these organizations that run these studies take an expansive view of subsidies. In the ODI study mentioned by Fizz, subsidies are broken down into three main groupings, Capex (exploratory, R&D), Opex (manufacturing) and consumer. In the Capex bucket, the ODI explicitly calls out the R&D tax credit, as research and development keep the US on the cutting edge. This is not a subsidy unique to oil and gas exploration and manufacturing. You could eliminate it entirely, but it offers salutary, outside benefits across industry, and across the government/private sector divide. Other items that are routinely categorized as "subsidies" from this group include the Master Limited Partnership, which avoids double taxation-- a sound and foundational policy goal of the US tax system, Domestic Manufacturing Deduction-- which encourages domestic manufacturing generally, and the foreign tax credit. (same sources for all). As far as I could tell the ODI study made no attempt to differentiate these types of "subsidies", but we know they included at least one of them, the R&D credit.

Specific Accounting Considerations for the Oil and Gas Industries

The question is why the US cannot eliminate "subsidies". One reason is that we have to account for these assets and expenses somehow, and GAAP better practices appear to be in conflict with the WTO's definition of subsidy (maximization of tax revenue). The two big ticket ones here are depletion allowance and intangible drilling costs both of which one could infer are in the ODI report. For small independent producers, petro reserves are required to be capitalized. Any asset on the books is required to be depreciated, again not specific to this industry. Likewise the intangible drilling costs from an accounting perspective one could easily argue that the rules are very penal to the oil and gas industry as $0 assets should be written off immediately, not over time. I think it's more incumbent on those suggesting that we get rid of these subsidies suggest what their plan is from a tax and accounting policy perspective.

The US does not end fuel subsidies because it does not HAVE fuel subsidies, at least as far as I've been able to discover. Nothing in the linked article (that has actually been implemented) is a subsidy. (The general thrust seems to be that the authors think the US should be charging even higher royalties & taxes than it does, which is hardly a subsidy.) At most, there are lower rates of taxation, or tax refunds, for some fuels (e.g. agricultural diesel).

The Federal government taxes gasoline at 18.4 cents/gal and diesel at 24.4 cents/gallon. State local taxes add an average 34.24 cents to gas and 35.89 cents to diesel: https://en.wikipedia.org/wiki/Fuel_taxes_in_the_United_States In addition, oil & gas wells on public land pay royalties on the value of what they extract, and many states impose severance taxes on top of that: http://www.ncsl.org/research/energy/oil-and-gas-severance-taxes.aspx For instance, Alaska's taxes on North Slope oil production is enough to pay $1600 (in 2018) to every resident of the state (in addition to what's spent by the government). On top of that, fossil fuel companies pay income and property taxes.

Not the answer you're looking for? Browse other questions tagged united-states geopolitics lobbying .

25
What plans do European countries have if Russia closed gas pipelines to them?
11
How tightly can a 501(c)(3) and 501(c)(4) operate as the same organization?
2
Why does the US allow other countries to lobby its government?
2
Why is the U.S. wary of the Belt and Road initiative?
8
Why won't the U.S. sign a peace treaty with North Korea?
47
Is there a strong legal guarantee that the U.S. can give to another country that it won't attack them?
0
Why won't the U.S. move more rapidly towards modernizing its army?
3
Would renewable energy be more prominent if the USA removed all energy subsidies?
0
Why has there been so much resistance from the government to enact a law to limit political contributions from donors in the U.S.?