Why are the formal borders of a city sometimes far smaller than the full metropolitan area?

As an example, Paris formally consists of the 20 inner districts despite being completely blended into the surrounding "suburbs". What prevents Paris from merging all of its suburbs under one political entity for easier management?

Other examples that I know of are New York City, Los Angeles and Seattle. There's probably many more such agglomerations around the world.

Fragmentation is very common in France and not limited to Paris or large cities. France has many many municipalities that are way too small to take care of all the duties of a modern municipal authority (transportation, sanitation, waste collection, etc.) and maintain the technical and administrative know-how needed to organize or procure these services. Some other countries have aggressively merged municipalities, often through incentives from the central state but that's not the case in France.

Instead it has chosen another route: Municipalities get together and transfer some of their powers to higher level corporations. These include general-purpose corporations with the power to raise taxes (communautés de communes, communautés d'agglomération, communautés urbaines and métropoles) and special-purposes associations (called syndicat intercommunal à vocation unique or SIVU) dedicated to one function (like transportation or waste collection) with no taxation powers (i.e. they depend on their member cities for funding). Nearly all municipalities in France belong to a general-purpose corporation and many also belong to several special-purpose SIVU as well (directly or more often nowadays through a general-purpose communauté which is itself a member of a SIVU). Many things are in fact managed at the level of a larger urban area but municipal boundaries remain the same.

Now Paris is a special case. Many cities in the world are governed by a body that doesn't cover the whole urban area but Paris is especially tiny compared to other European cities: Paris proper is half the area of Amsterdam, a fifth that of Prague and a tenth that of Rome or Berlin. Interestingly, it did in fact expand many times and absorbed villages whose names are still used today (Montmartre, Grenelle, Belleville, Batignolles…) The last of these expansions took place in 1860 and that's not a coincidence.

In the wake of the French defeat in the Franco-Prussian war of 1870, the conscripts (garde nationale) who defended the city during the siege rose against the new government and formed the backbone of a revolutionary government that ruled the city for a couple of months. After that, the French state was especially wary of anything that could make the city of Paris larger and more powerful and got even more involved than before in the affairs of the city. There was no elected mayor of Paris until 1977, the city was administered by a préfet reporting directly to the interior minister.

I'm not certain about those other cites, but at least for Los Angeles the metropolitan areas surrounding LA are independent cities in their own right. LA has no jurisdiction over them to merge them into being a part of LA.

Though they may be neighbors, the different cities usually have differing tax codes, zoning ordinances, traffic laws, etc. Taxes and other public funding are kept within the borders of the city; so neighboring cities will have differing levels of school, hospital, police, public housing, and public transport. It would be no small task to change over all of the laws and assume all of the liabilities of another city. And smaller, wealthy, cities would never want to be a part of a larger, poorer, city where their assets and benefits would be diluted.

There's a lot to it, but the simple answer is that the surrounding "suburbs" of cities are made up of other independent cities; and a city has no authority to simply take over a neighboring city.

The New York metropolitan area is enormous. It extends from the eastern tip of Long Island to significant chunks of New Jersey and Connecticut. It overlaps with several of the largest cities in both of those states. It has a land area of more than 11,600 square kilometers, and a population of more than 20 million people.

If you put all of that under a single administration, you would need to subdivide it to some extent, as it would be more populous than the entire state of New York. By comparison, New York City itself has a much more reasonable population of ~8 million people. But if you subdivide it, that just brings us right back to the premise of this question (why is the center special?).

Another issue is federalism. New Jersey and Connecticut have the right to make their own laws, which may differ from New York law in various ways. Any merger would require some mechanism for the same municipal corporation to be incorporated under multiple state governments simultaneously, which isn't generally a thing in American law (compare for example Kansas City, which is legally two cities on opposite sides of the Kansas-Missouri border). The cities of Newark and New Haven (and all the others in the area) are their own municipal corporations, and would need to be dissolved if we want to merge them into New York City. The same goes for the towns and villages on Long Island, which also enjoy a degree of legal independence and cannot simply be annexed by the city.

In theory, the New York state legislature could dissolve those towns and villages by statute, but the city has shown no interest in this prospect, because Long Island is much more suburban than the city proper. It has no subway access to the city, and regular but much less frequent rail access. Car and home ownership are both more common on Long Island, and real estate prices are far lower per unit area. It wouldn't make sense to try to administer Long Island as part of the city.

What prevents Paris from merging all of its suburbs under one political entity for easier management?

With political agreement at the national level (I suppose; I'm not familiar with the details of France's constitution), nothing prevents it. Cities expand from time to time, including your examples:

The question should be whether or when such an expansion of a city's limits is beneficial, not what prevents it from happening, because it happens regularly.

The question where a city’s boundaries are, where they should be and whether they should be changed from the first to the second is essentially a combination of history and politics. Relaxed beautifully outlined the Paris case. I’ll take a look at a couple of other examples.

Berlin used to be a much smaller town by area and surrounded by a couple of other towns such as Charlottenburg, (Neu-) Kölln, Spandau and a number of smaller villages. With the beginning of the industrial revolution in Germany, the capital of Prussia and later the German Empire was obviously a prestigeous place where a lot of industry was founded or settled, drawing lots of workers and increasing the built-up areas until they formed one large metropolis. This formed problems as the individual communities would, for example, plan their road networks with little consideration of their neighbours. So in the late 19th and early 20th centuries, a number of plans were drawn up to fuse all these smaller towns into one huge city, Greater Berlin (Groß-Berlin). The plan was finally put into effect in 1920, forming the city boundaries that by-and-large are still in force today. There was now one central planning authority for the entire city.

The situation was similar in Hamburg, however there it was the Nazi party that decreed Greater Hamburg (Groß-Hamburg) in 1937. After the war, there were some more or less serious attempts to reverse this as individual towns wanted to regain their independence from the central Hamburg authority.

Munich, on the other hand, grew gradually in a series of incorporations of surrounding towns and villages. The following map (taken from the German Wikipedia) shows the different areas coloured according to when they were incorporated into Munich. Compared to Berlin, there was obviously far less opposition to creating the greater city in Bavaria; potentially because Munich itself may have always been more important and larger than the surrounding towns and villages. 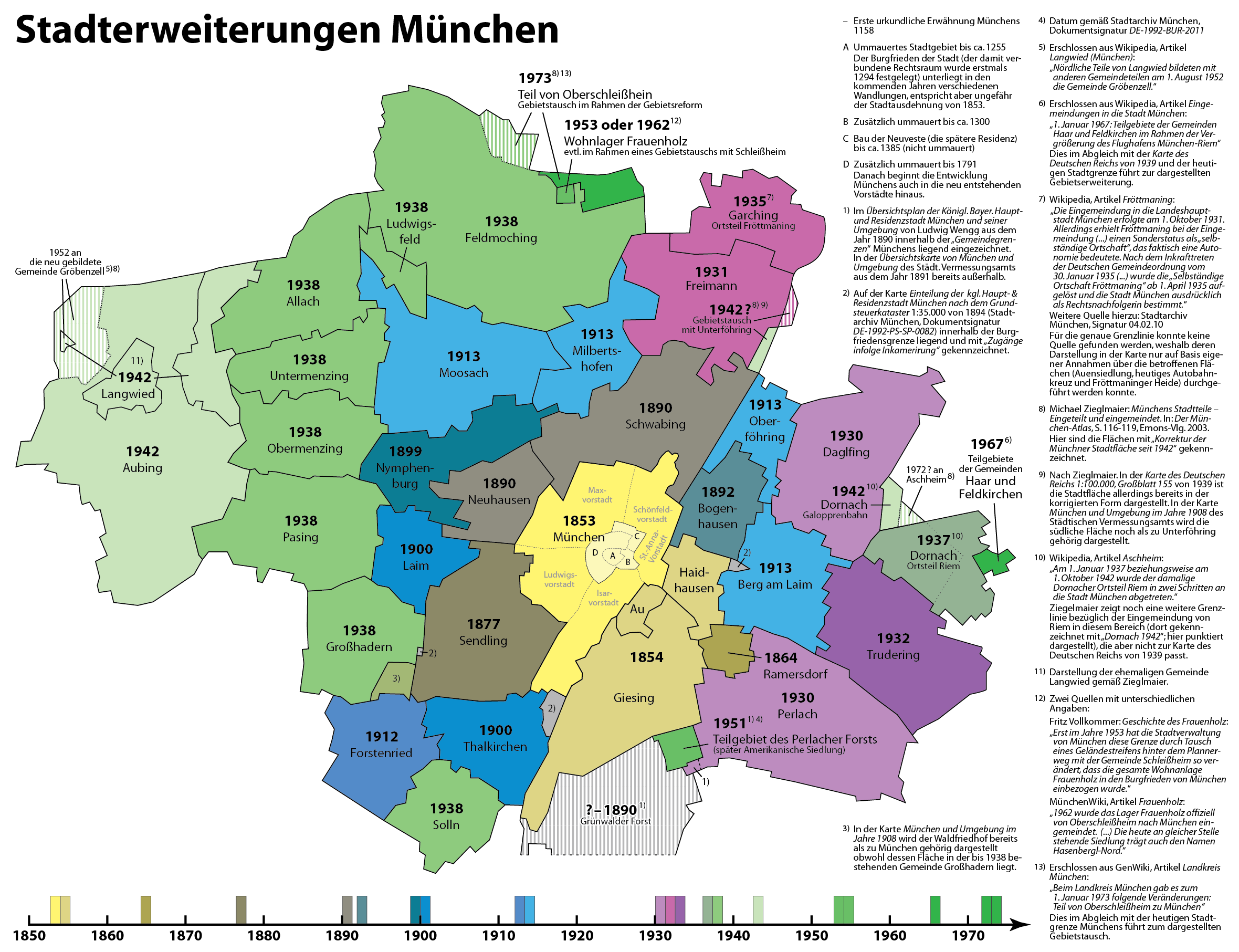 Chinese cities tend to be huge in area. For example, Shanghai covers an impressive 6300 square kilometres. This is a result of a number of mergers shortly after the Second World War, initiated top-down by the Chinese Communist Party (although even before the mergers Shanghai wasn’t small by area). as a result, the city boundaries not only include all of the inner metropolitan area but large agricultural and forest areas, villages far, far out. I travelled on the Shanghai metro to a place called Zhujiajiao which took upwards of 45 minutes with the metro travelling what looked like countryside for most of the journey.

So summing this up: small cities proper in a densely built-up metropolitan area like Brussels with a number of independent cities/towns around it tend to be the original state of things if nobody attempted significant mergers or if they were rejected by local governments, local population or others. It takes political will to create a larger city and it often needs to overcome local objections, so large metropolitan areas under just one city administration are usually there on purpose.

It would require a Constitutional amendment to expand DC to include its entire metropolitan area.

27
Why is redrawing the artificial borders not a viable solution to conflicted states?
7
Why are only certain professions able to countersign passport photos in the UK?