Why is the Common Agricultural Policy unfavourable to the UK?

It's often said that the EU Common Agricultural Policy (CAP) is disadvantage to Britain, from the Guardian:

Britain’s withdrawal from the EU’s common agricultural policy (CAP) provides one of the few bright spots of Brexit, and if replaced with new legislation could help to restore some of the country’s degraded natural environment, one of the government’s leading economic advisers has said.

Dieter Helm, professor of energy policy at Oxford University, told the Guardian: “If there was any reason to be optimistic about Brexit, it is that it is the end of the CAP. It is hard to think how you could be anything other than better off if you had control of how you spend [the sums currently allocated in farming subsidies].”

I've found the following graph in an EU report on Agricultural and farm income: 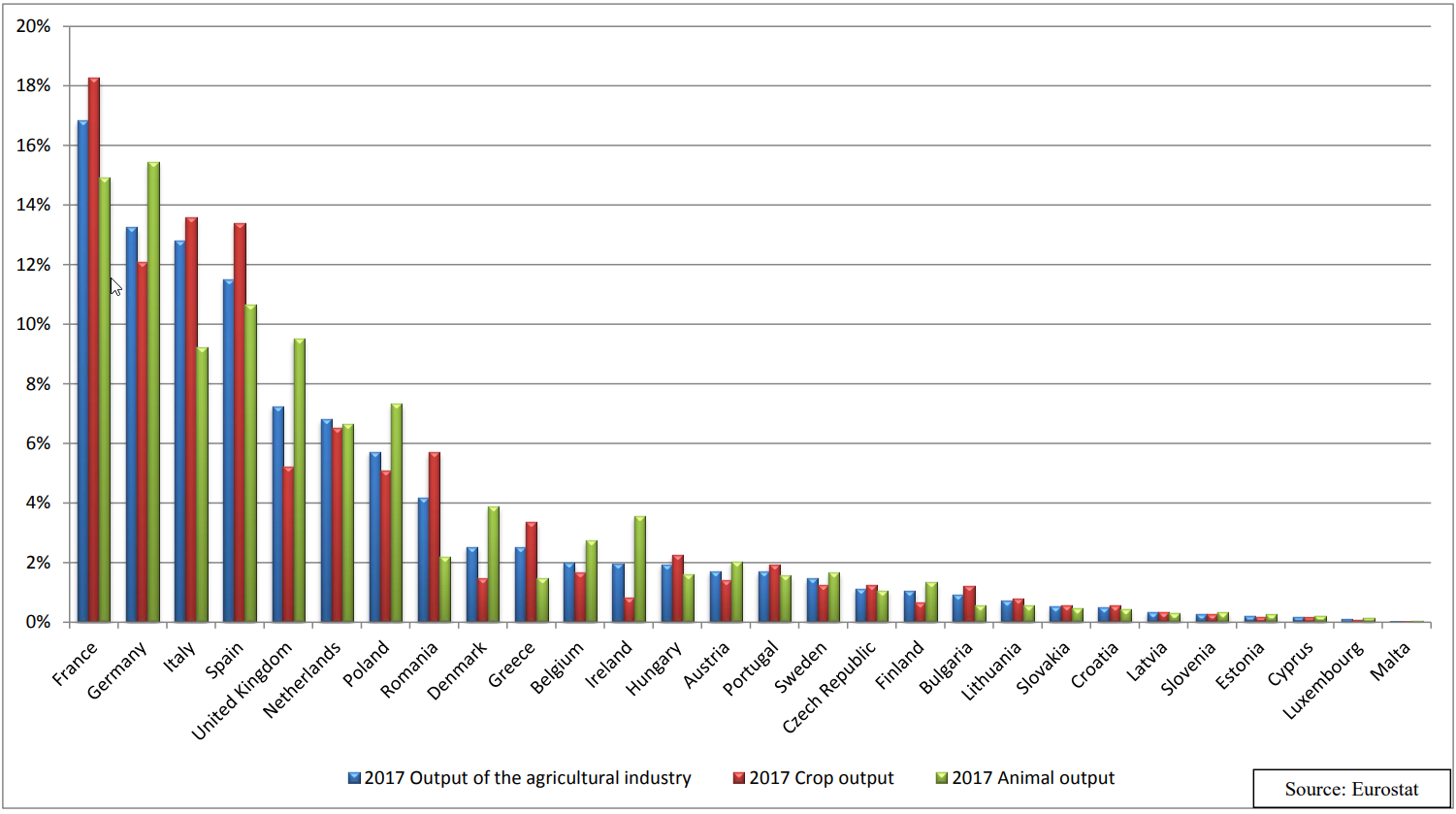 It's often said, for example in this answer, that the CAP favours France, but it's unclear why. An obvious reason is that France has a larger agriculture industry (as supported by the graph) than any other EU country.

On the other hand, it seems a lot of criticism of the CAP comes from the UK, with the quote from the Guardian saying that the UK could better allocate funds for farming. The article goes a little bit into environmental improvements, but it's unclear to me why and if that's the major concern of the UK regarding the CAP.

My question is whether the CAP disproportionately disadvantages the UK compared to other EU countries (not just France, because it has a large agriculture sector) and what reasons contribute to that disadvantage. Or are other EU countries critical of the CAP as well and does it actually favour France over most / all other EU members? 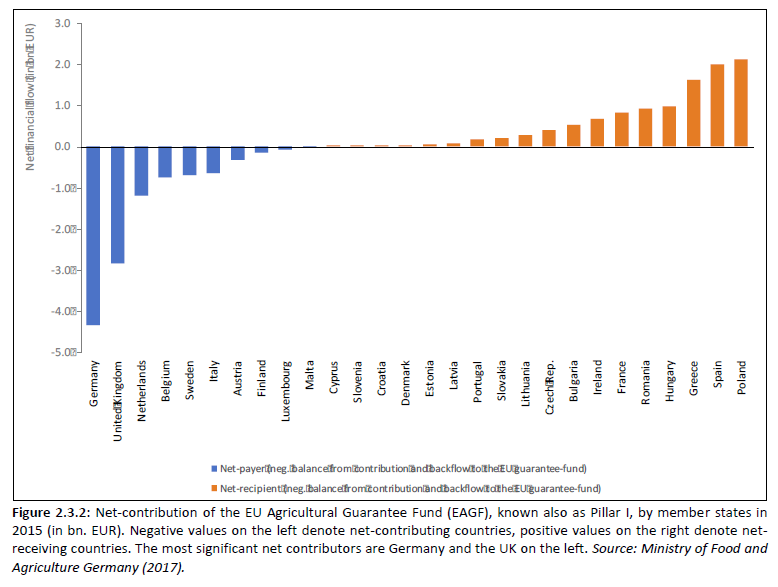 The catch is that is only pillar 1 subsidies (100% EU budget contribs), there are also pillar 2 CAP subsidies (50/50 split with the national budgets), not included in that graph. But this is most of the money:

The net benefits issue is actually not trivial, because it does require some counterfactual assumption. See this page for a discussion, which is mostly focused on Ireland, but has a raft of older papers.

As for why the [im]balance is like that... it's pretty obvious due the share of agriculture in GDP being in the lowest bracket in Germany and the UK. 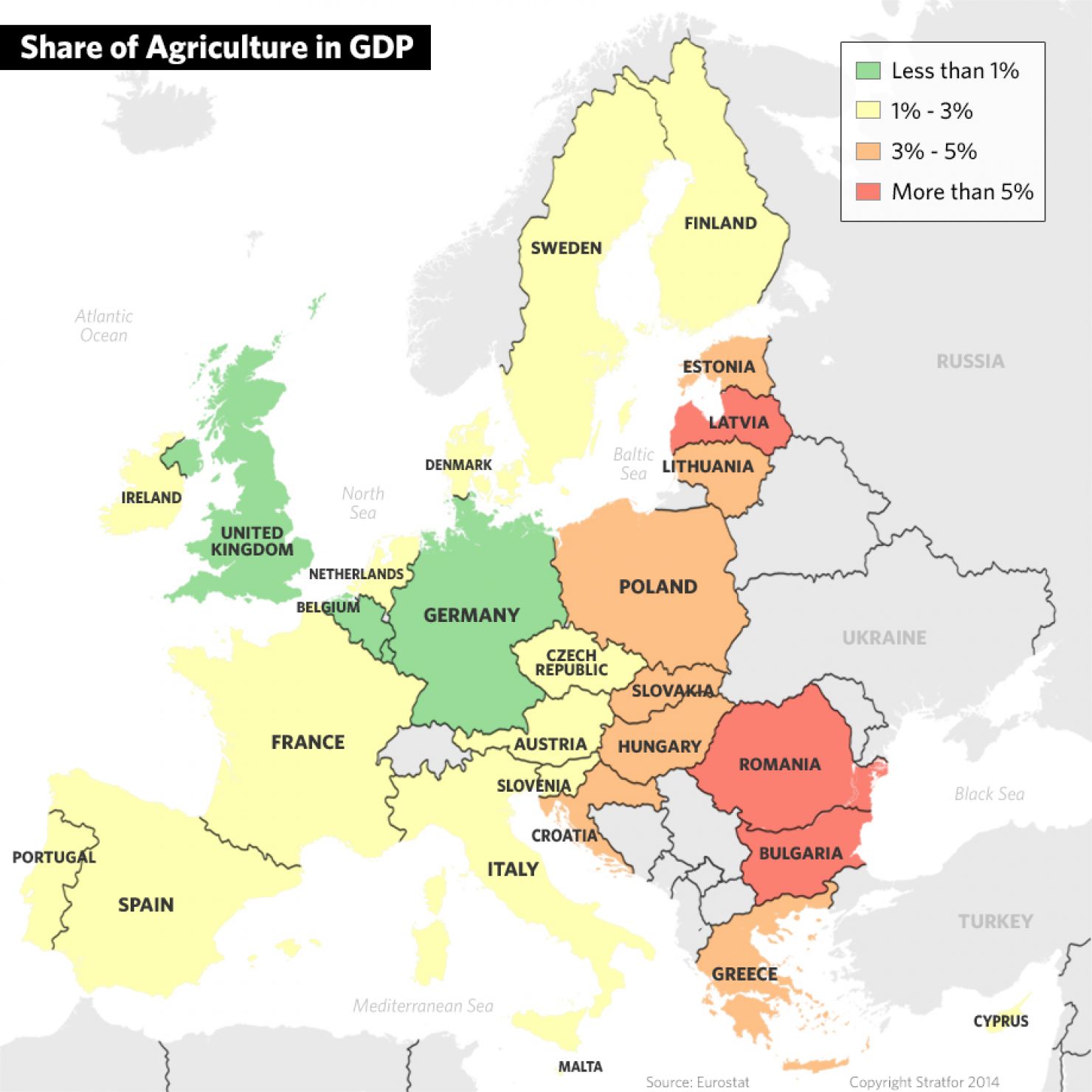 Also the issue of the biggest net contributors to the CAP is translated into a similar one at the whole EU budget level. (I'll spare you the graph here; the UK comes 2nd after Germany.) This is in part because the CAP has such a large share of the EU budget, because there are few if any state-level agriculture programs. As the World Bank explains:

The Common Agricultural Policy (CAP) is the largest budget item in the EU budget, but largely substitutes for national spending on agriculture, unlike any other sector. At nearly 40 percent of the EU budget, it is the largest single line item and translates to about €50 billion a year, or a resource transfer of 0.4 percent of GDP in support of the agricultural sector. While the budget share looks large, support for agriculture in the EU Member States is largely done through the CAP budget. In addition, national budgets are estimated to combine for another €18 billion per year through top-ups to the CAP and other support for agriculture. Other sectors, such as education, transport, defense, pensions and healthcare are either not included in the EU budget, or take a much smaller share, because they are paid for — fully or partially — out of national budgets.

[...] Today’s CAP has moved a long way from the “coupled” support (support targeting the production of a particular commodity), which produced the proverbial butter “mountains” and wine “lakes” in the 1980s and early 1990s to the “decoupled” support [income support] farmers receive today. This shift explains to a large extent why, while the CAP spending amounts to about one-tenth of global agricultural subsidies, world market and EU prices have now mostly converged.

It's hard to be impartial in defining the advantages and disadvantages of the CAP, since it involves making a value judgement of what it's "for". However, the current implementation makes especially large payments to countries like France and Spain, which are big but have relatively low population density, since it is principally based on the land area of farm, rather than their production. The change to this method was itself a fix for a system of subsidy which had ended up with production totally out of kilter with demand,

On the other hand since France is also a highly developed nation with a large economy, it also makes large payments towards the funding of the system. The website "capreform.eu", (which as you'll see from the title definitely isn't impartial) calculates that on the 2014 CAP budget France was a marginal contributor, with the Germany the biggest (by a significant margin). In this ranking (which is taken post rebate) the UK comes third.

Not the answer you're looking for? Browse other questions tagged united-kingdom european-union agriculture .

22
What are examples of EU policies that are beneficial for one EU country, disadvantagious for another?

14
Brexit: leaving Customs Union and/or Single Market -- what do these things really mean?
5
Restrictions on reform to the common agricultural policy by the UK post-Brexit
8
Are there precedents for the EU fining the UK for undervalued Chinese imports?
1
What are some examples of recent concrete policies within the EU Common Agricultural Policy?
1
Why hasn't France exited the EU, when it loathes the EU's enlargement?
20
Why does the Common Agricultural Policy exist?
0
What's Common Market 2.0 / Norway Plus?
5
Does the EU Common Fisheries Policy cover British Overseas Territories?
29
Why is the lack of seasonal agricultural workers considered a problem given the high unemployment rate in every Western country?