Why does the Israeli Blockade of Gaza cover things other than weapons?

One of the main reasons Hamas cites for continuing to launch rockets into Israel is the Israeli blockade of Gaza by air, land, and sea, which in the Palestinians' view effectively makes Gaza an "open-air prison". Now as I understand it, Israel's justification for the blockade is that it's necessary to prevent the importation of weapons into Gaza, weapons that would presumably be used to attack Israel.

But my question is, why isn't the blockade limited to weapons then? My understanding is that the blockade covers all goods, and it even covers exports from Gaza. Why would Israel be concerned if people export things from Gaza? And I've also heard that it restricts the movement of people, to the point where residents of Gaza can't leave the area to go to college in a foreign country. What is the explanation for that?

The only potential explanation I've seen is from a recent interview with Danny Ayalon, former deputy foreign minister of Israel, who said that Israel would be willing to replace the blockade with a regime where all shipments into Gaza are inspected to see if they contain weapons, but that the Palestinian Authority has repeatedly refused such an inspection regime. Is it true that the Palestinian Authority has refused such a proposal? If so, what is the reason that they gave?

EDIT: I found the interview with Danny Ayalon. See the 2-minute mark of this video. Here is the relevant excerpt from the transcript:

AYALON: Only as a response to the Hamas and before that to the Fattah as well. The PLO are smuggling and actually creating a launching pad of attacks on Israel from Gaza. If the Gazans or if the Palestinians over there would accept a effective, a reliable monitoring regime it wouldn't be a problem, but you see, they always accused us for not understanding. They imported a lot of cement for building, but we find out now that most of the cement was put in underground for all this tunnel war, and attack tunnel war from which they wanted to attack it, and indeed attack and kidnap one of our soldiers, Gilad Shalit.

So we see this is a regime over there, a terror regime which cannot be trusted. This is why we need to make sure everything goes in is inspected and we would like very much Gaza to flourish. This is why we left in the first place.

So is it true that Israel has offered to replace the blockade with some sort of monitoring regime or inspection regime, but the Palestinians have refused?

It is incorrect that the blockade applies to all goods. Many are allowed, though Israel does not publish justification for all non-weapon items that are banned. Since 2010, Israel eased restrictions on non-military items.

On 20 June 2010, Israel's Security Cabinet approved a new system governing the blockade that would allow practically all non-military or dual-use items to enter the Gaza strip.

Israel still bans the import of some non-military items, but many things that are not weapons can still be used for military purposes. For example, Hamas uses building materials to build tunnels. These tunnels sometimes run from Gaza to Egypt, where they are used to smuggle weapons past the blockade, but can also run into Israel, where they are used to attack and kidnap Israeli soldiers, as well as to conduct terrorist attacks.

There are other items that Israel classifies as "dual-use goods", which means that they can be used both for legitimate civilian and for military purposes. Some such goods include:

Restrictions of movement have generally been attempts to curb terrorist attacks. Before Hamas' takeover of Gaza in 2007, Palestinians were more free to move between Gaza and Israel, but that is now only allowed in exception humanitarian cases. Israel and Egypt closed off movement from Gaza on the grounds that Fatah was no longer providing security in the area.

Restrictions of movement have generally been successful at preventing terrorist attacks inside of Israel, though this has made the border crossings a popular target for terrorist sites. As a result, border crossings are usually closed during active conflict:

Since 1996, virtually all suicide bombers trying to leave Gaza have detonated their charges at the barrier's crossing points or were stopped while trying to cross the barrier elsewhere.

Israel's restrictions on Gaza are generally designed to deprive Hamas of military capability, and to put pressure on them to stop the conflict.

While Avi's answer covered most of the basics, here are some facts and numbers to illustrate the fallacy of "the blockade covers all goods":

E.g. on August 3, 185 trucks carrying 3,270 tons of goods and supplies entered Gaza via Kerem Shalom Crossing (statistics courtesy of IDF, so I accept accusations of biased source... but you're welcome to state independent facts falsifying this source that isn't empty-worded propaganda).

Among the trucks were:

Since the beginning of the operation the following amounts were provided to the Palestinians via the Kerem Shalom crossing (data up to and including August 3):

In addition, Israel continues to supply electricity to Gaza (sans damaged power lines) despite the fact that Palestinians don't pay for it. 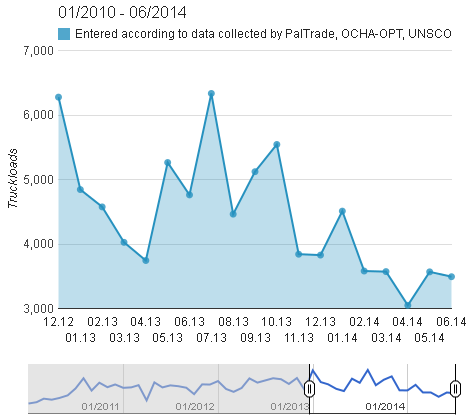 Additional note on the "Why": because many things don't appear to be "weapons" to an average person, yet can be - and most importantly, are and have been - used in military capacity by Hamas.

The intention of the blockade is (besides not allowing weapons and dual-purpose goods) to paralyse the local economy and put pressure on the government. That explains why exports are not allowed. There is also a ban on "non-essential luxuries" so the blockade allowed frozen salmon and low-fat yogurt into Gaza, but not coriander and instant coffee. (source)

Not the answer you're looking for? Browse other questions tagged israel palestine gaza .

18
Does substantive due process apply to the Second Amendment?

23
Why is the Israeli-Palestinian conflict such a big issue?
14
Why is there no call for Hamas to protect and reduce civilian casualties?
15
Does it make sense for Jordan & Egypt to annex Gaza and the West Bank?
7
Does the UN Security Council votes 14-0 to condemn Israeli settlement have binding consequences for Israel?
21
Does Britain have de jure authority over the West Bank and Gaza?
9
Why did Egypt start the blockade of the Gaza Strip?
8
Why do the Palestinians in Gaza not declare an independent state?
8
Why does Ben and Jerry's boycott of the occupied territories further BDS's cause?