Did Trump make any concessions in his 'Phase 1' trade deal with China today?

From what I've read, the US agreed to not proceed with a round of tariff increases on Chinese imports, and in exchange China agreed to buy several tens of billions of dollars more in agricultural products from the US. This sounds as though the US is gaining, and China is gaining nothing except avoiding tariffs being imposed on their exports. Did the US make any concessions here? Or was this a case of "give us this, and in exchange we won't do this thing that hurts you"?

This question is making the usual fallacious assumption (from Trump propaganda) that raising tariffs only hurts your "opponent" trade partner. But it hurts your own economy too. Given the weakening US economy, especially in manufacturing we don't know what the US administration's threshold for tariff self-punishment is.

Also the Chinese have made promises to buy lots of soy before, and those promises didn't really materialize.

There's also an indication that China's own tariffs on US manufactured exports didn't really do anything other than increase prices for their own consumers. Commodities are another matter though, with US exports plummeting in that category. 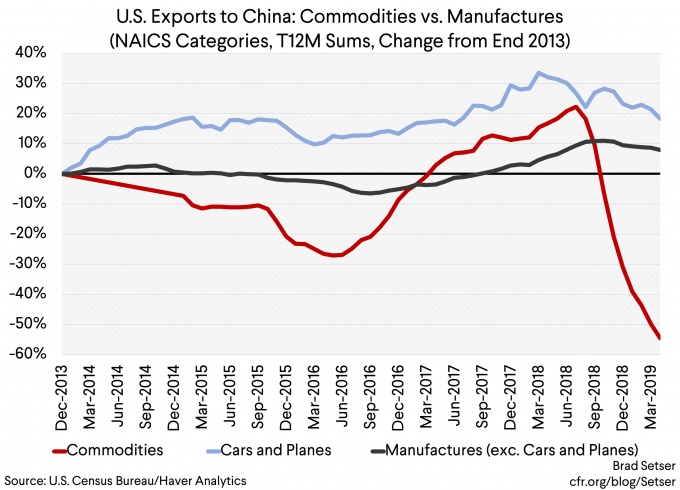 And for soy in particular, China has been successfully substituting US exports with Brazilian ones. 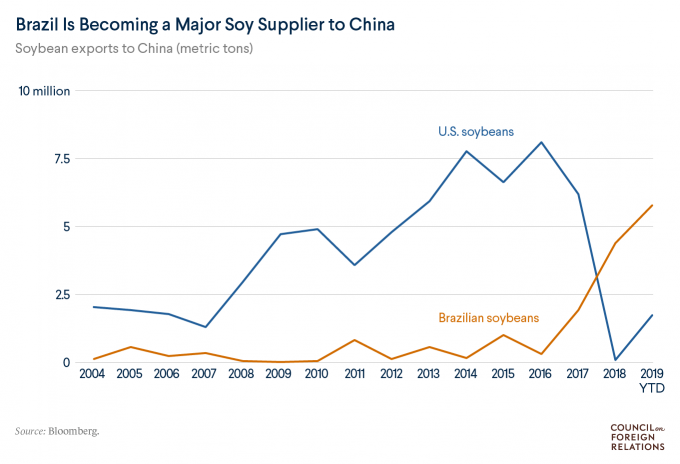 So having successfully shut off most of the US soy exports to China, they engage now in the so-called "soy diplomacy", in which they make various limited concessions and promises in that area, typically ahead of a negotiation round.

So China would not really be making any deep self-sacrifice by importing soy from the US again. In other words, what China offers is cheap for them to offer an quite valuable to the US, which has been subsidizing its farmers with an additional $28B over two years, due to the trade war.

As AP notes, putting this "phase 1" in perspective:

The two countries are deadlocked primarily over the Trump administration’s assertions that China deploys predatory tactics — including outright theft — in a sharp-elbowed drive to become the global leader in robotics, self-driving cars and other advanced technology.

Beijing has been reluctant to make the kind of substantive policy reforms that would satisfy the [US] administration. Doing so would likely require scaling back China’s aspirations for technological supremacy, which it sees as crucial to its prosperity.

If we assume that Trump thinks that tariffs will make the Chinese buckle on the main issues at stake (IP etc.) or even reduce the US trade deficit faster (which Trump often uses as a metric of China's unfairness), then Trump not imposing more tariffs now is a loss (for him) of immediate negotiating pressure on China. Of course, he can just keep the threat of more tariffs in the future, but that's not quite the same as imposing them now, which is a stronger present-day signal. So yes, he is giving up some bargaining power, under these assumptions, but it's not a lot.

"Agreeing" to do things is a euphemism with no substance. China can change its mind tomorrow, and so can Trump. There is no deal.

Trump is exaggerating the significance of the talks because he is desperately trying to fabricate a "win" somewhere, anywhere. What is really happening is that both sides are agreeing to pursue an agreement.

So China has made no concessions whatsoever. There isn't even an agreement.

Not the answer you're looking for? Browse other questions tagged united-states international-relations china trade tariffs .

5
How big is the total bailout (“trade aid”) that Trump gave to US farmers since the trade war began?

6
What interest does China have in U.S. debt?
9
Exactly what did China “renege on” in a trade deal?
33
Can European countries bypass the EU and make their own individual trade deal with the U.S.?
1
Why did EU sign a free-trade deal with Vietnam?
11
When is a US tariff actually paid?
3
Why did the UK not trade more with countries outside the EU?