Does the M4 highway in Syria reside entirely in the initially announced Turkish "safe zone"?

According to CNN, Turkey and its proxies having cut off the M4 highway, which runs roughly in the east-west direction along the northern border (but in the Kobane-Aynisa sector it's more like northwest-southeast):

shows that the initial Turkish incursion intends to pressure -- at the least -- Kurdish territory over 10 miles further than the 18-mile-deep corridor suggested they would occupy.

But was the highway itself claimed by Turkey as part of their initial "safe zone" map, before their incursion began? If they didn't claim the M4 highway entirely, how much of the highway did they claim for their "safe zone"?

I'm struggling to find a map of the Turkish zone that has the highway superimposed. Most maps just plot the zone over a geopolitcal map with no roads or other features shown besides official borders. According to a Turkish-released map of the hostilities, on Oct 12 they've cut the highway in the El Halidiye sector east of Aynisa, but this map doesn't show their initially proposed "safe zone".

Ain Issa, which was the headquarters of the Kurdish-led administration in northeastern Syria, owes its significance to its position beside the M4 highway, which runs from the Iraqi border across northeastern Syria. [...]

Turkish-backed rebels have set up checkpoints on the highway near Ain Issa, cutting off U.S. troops in bases to the west, in Manbij and Kobane. Those troops came under Turkish artillery fire Friday night in what some U.S. soldiers suspect was a deliberate attempt to drive them away from the bulk of the U.S. forces farther east, Kurdish and U.S. officials said.

The New York Times - Syria Live Updates shows a map of the "Turkish Buffer Zone" that includes M4 (see the narrow line that runs right along the border). It seems to be largely inside, though Ain Issa (which was attacked by Turkey and is on the M4) is outside it. 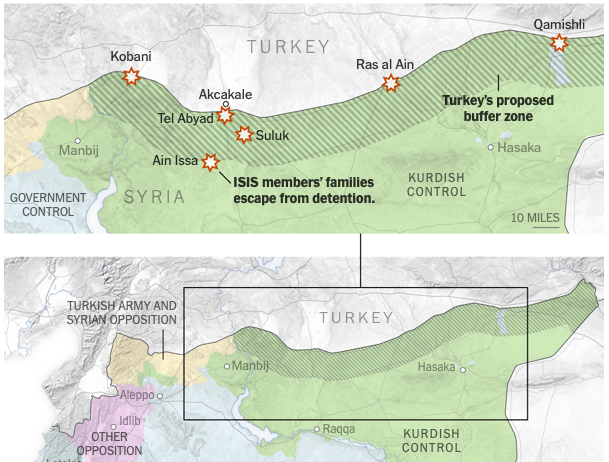 Not the answer you're looking for? Browse other questions tagged armed-conflict syria turkey geopolitics kurdistan .

4
Why has Macron offered to mediate between the Turkish government and YPG force of Syria?
6
What is President Trump's first public reaction to Turkey's invasion into Northern Syria against his stark warning?
3
What is Trump's plan to end or reduce US involvement in Syria?
2
Has Russia said anything about helping Syria fight Turkey, now that the SDF has allowed Assad's army to move north?
1
Has Pence essentially granted Kurdish Syrian territory to Turkey, subject to Russian approval?
4
Has Turkey explained how their larger "safe zone" is going to be different from what's going on in Afrin?
1
Has the US clarified where they (rather than Turkey) expect the SDF to withdraw from?
1
What Kurdish Syrian parties does the CIA and/or the US consider terrorist [affiliates] and which ones it doesn't?
14
Did the USA have a political agenda in Syria beyond simply the containment of ISIS?
5
What happened to the previous (2019) buffer zone that Turkey supposedly had in Syria?