What is the meaning of "artificial borders"?

In the political analysis of many conflicts, especially regarding Africa or the Middle East, many people explain the conflicts as being caused, in part, by "artificial borders."

There are also proposed solutions that involve resettling the populations or redrawing the state "artificial borders."

In political science is there a thing like "artificial borders"? How can we determine them? Are national borders supposed to match ethnic borders?

The question is a bit unclear to me (it seems to be more an invitation to a discussion), but if you're asking about an operationalized definition here's one (which includes examples):

Artificial states are those in which political borders do not coincide with a division of nationalities desired by the people on the ground. Former colonizers or post-war agreements among major powers regarding borders have often created monstrosities in which ethnic, religious or linguistic groups were thrown together or separated without any respect for those groups’ aspirations. Eighty percent of African borders follow latitudinal and longitudinal lines, and many scholars believe that such artificial (unnatural) borders, which create ethnically fragmented countries or, conversely, separate the same people into bordering countries, are at the root of Africa’s economic tragedy. Not only in Africa, but around the globe, including Iraq and the Middle East, failed states, conflict and economic misery are often very visible near borders left over by former colonizers, borders which bore little resemblance to the natural division of peoples.

And they have two measures proposed:

The basic idea is to compare the borders of a country to a geometric figure. If a country looks like a perfect square with borders drawn with straight lines, the chances are that these borders were drawn artificially. On the contrary, borders that are squiggly lines (perhaps meant to capture geographic features and/or ethnicities) are less likely to be artificial. Squiggly geographic lines (such as mountains) are likely to separate ethnic groups, for reasons of patterns of communication and migration.

And yep, the use the fractal dimension for that.

Our second new measure focuses on the specific case of borders cutting across an ethnic group and dividing it into two adjacent countries. The variable is defined as the percentage of a country’s population that belongs to a partitioned group. The latter is a group that is present in two bordering countries.

This is actually non-trivial to measure for reasons having to do with the relevance of the ethnic group as a potential core for a nation, how spread the group's partitions are geographically (i.e. whether they had a real chance of being a country). You should read the paper for details, but as a [non-]example:

So, for example, “blancos” were listed as a separate ethnic group in Bolivia, where the ethnic differences between whites and indigenous people are politically salient, but obviously it would not be meaningful to talk about “partition of whites” across nations.

They do say this interesting bit about US and Canada wrt fractal measure:

Their border is a straight line for most of its length; are they artificial states? According to our measures, yes; they do score relatively [high] in terms of how artificial they are, which is certainly not consistent with a view of artificial [states] as failed states. One may note that this a case in which borders were drawn before many people actually moved in. In many ways, the same applies to US states: in the West, borders that were drawn when the population density was still extremely low are often straight lines. On the contrary, borders of East coast states, drawn earlier amidst higher population density, are less straight.

As for whether this is a problem that should be fixed (and how)... the answer has varied with political philosophy (and I'm using that term magnanimously), ranging from border adjustments and forced population transfers (many examples in the aftermaths of World Wars) to (instead) granting minorities rights (like some degree of autonomy), making borders less relevant by various kinds of economic unions, free travel arrangements, or going for a "melting pot".

What is the opposite to artificial? Natural!

What are 'natural' borders?

Are there "natural borders" between peoples, different from those just listed?

Peoples are never divided 'naturally' by anything other than the features just listed. And even those can't account for much. Frankfurt/Oder, Görlitz? Texas along the Rio Grande urban agglomerations?

If you look at any ethnic map, regardless from where-ever, when-ever, you will never see anything like "all X live East, all Y live West". It is always a mix. Absolutely no matter when or where.

Where did Han Chinese vs Uigurs, Mongols, Manchu, live in 1400? Where did Germ-Germans live at the same time? Easy? Try again with Slavics and Germanics, or Manchu and Han.

Look at any map of ethnicity or even race for mid-eastern Europe during the whole 19th century (like here, example below). Then tell me where you would draw any 'natural boundary' between ethnicities. Try Germany/Denmark, Germany/France, Belgium, Germany/(Poland)/Russia, Germany/(Czechia/Bohemia)/Austria, Switzerland.
Anything South America emerging from the Spanish Colonial Empire, the US/Canadian border? 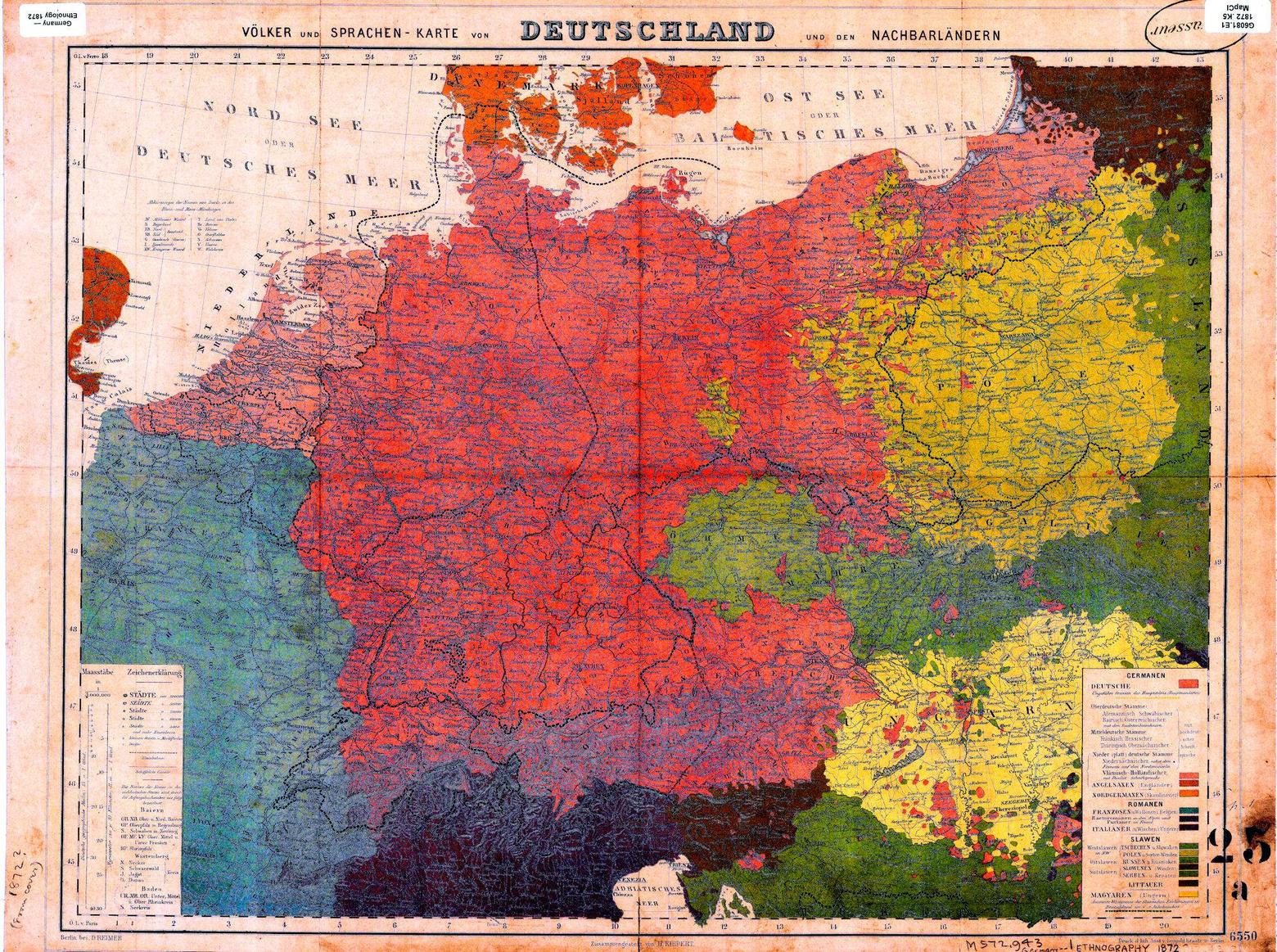 Is in this map a single 'natural border' drawn between ethnicities corresponding to state borders?

You might produce a kind of heat-map, or go by some 'majority' for certain areas. For the vast majority of places or lines it does not make any sense at all. Or if it does 'make any sense' (for those peddling it), it is a grave injustice for anyone else within that vicinity.

Outside powermongering hate-seeders, nationalism does not make any sense at all.

Artificial borders in the piece to analyse is a language problem. In such cases it means: "recent border" — people adapt to anything, even state borders. But that means transaction costs for adoption processes. And time. Impose a border, any border, and people left or right from that will slowly start to diverge.

Fundamentally the idea of the "nation-state" is a European phenomenon, it does not map very well to most other regions that haven't generated it on their own.

The Middle East and Africa are regions where their nation-state statuses were imposed, rather than forged.

India, China, Japan all had functioning core groups that had centralized power.

The Middle East had core groups that had centralized power, but were too weak to resist the will of the Europeans.

Africa was very similar where those core groups may of held a regional hold, but the Europeans had the power to completely disrupt and fractionalize the societies at will.

27
Why is redrawing the artificial borders not a viable solution to conflicted states?

10
World Map with Country Borders in the Oceans
27
Why is redrawing the artificial borders not a viable solution to conflicted states?
12
Are there any official borders between continents?
12
Is there a radar system monitoring the UK sea borders?
3
What is the political meaning of "shaheed" in India?
4
Why are the formal borders of a city sometimes far smaller than the full metropolitan area?
81
What is the meaning of "Cancel Culture"?
6
Are African country borders really straight?
3
What is the meaning of "actors" and "player" according to political terms?