Why is there a strong link between education and voting Remain?

The more highly educated you are, the more you are likely to have voted for remain rather than leave, in the EU referrendum. Why is this the case?

70% of voters whose educational attainment is only GCSE or lower voted to Leave, while 68% of voters with a university degree voted to Remain in the EU. Those with A levels and no degree were evenly split, 50% to 50%

Probably, at least in part, because people who voted leave are also more afraid of immigrants taking their low-skilled jobs.

Among the alternative interpretations given to this fact (by some comments on that paper) is that direct messaging and/or the tabloid press may be responsible for these differences, because the low-education segment prefers to read that kind of press and/or was more susceptible to direct misinformation via Leave campaign adds (including about the effects of immigration). But there's no data in the paper itself to directly support this alternative interpretation. (There might be some elsewhere; the panel discussion ended with some calls for more direct research on the differential effects of misinformation on the low-education vs high-education voters.)

I'll try to find something split by education (and more recent), but in the UK in general the opinion that immigrants "take" the natives' jobs was higher than in some other large EU countries, at least in 2011: 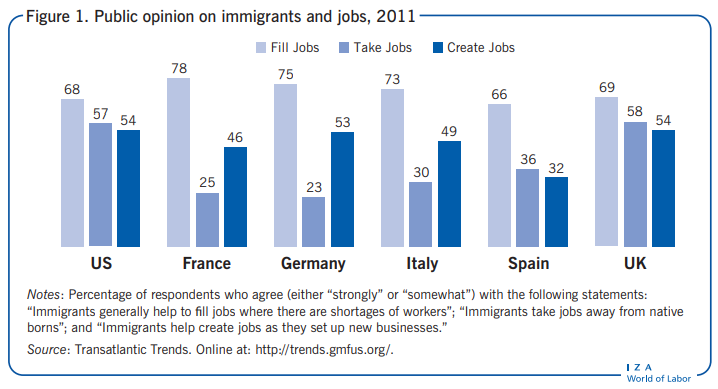 The press and politicians that ultimately backed Brexit were clearly spreading/supprting these ideas long before, e.g. 2011-era news:

Mass immigration poses the biggest threat to the Coalition’s attempts to get millions of people off benefits as foreign workers take low-paid jobs, Iain Duncan Smith [the Work and Pensions Secretary] will warn today. 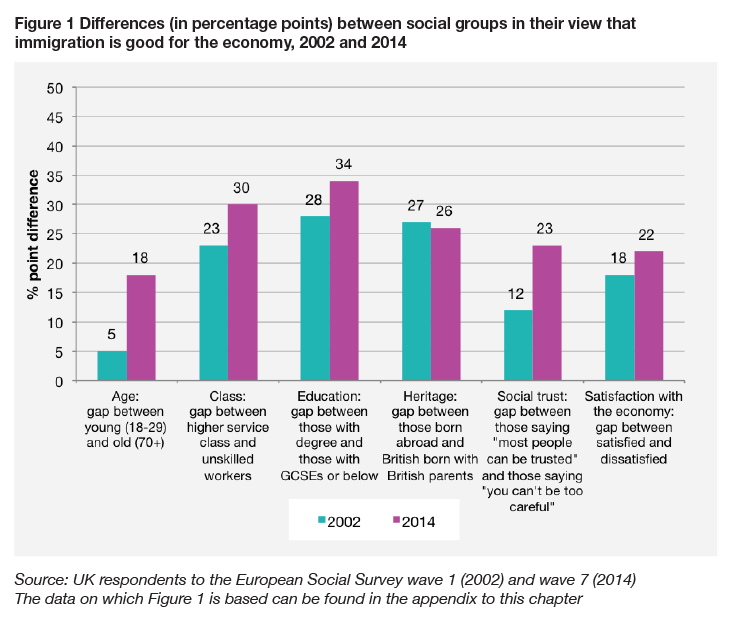 I think this mostly rules out that education is simply a proxy for age when it comes to views on immigration (despite the fact that younger cohorts are more educated.)

The same is true for the actual vote to leave, i.e. age does not "explain out" the effect of education:

To examine whether or not this is the case in Table 4 we show the level of support for Remain broken down by age and highest educational qualification combined. From this it is clear that, of the two, it is educational background that is by far the more important. Within each age group, there is a big difference between graduates and those whose highest qualification is a GCSE or less in the level of support registered for staying in the EU. In the case of those aged between 35 and 54, for example, as many as 81% of graduates voted to remain, compared with just 37% of those whose highest qualification is a GCSE or less; a difference of 44 points. In contrast, older graduates were only 10 points less likely than younger ones to vote for Remain, while the age gap among those with a GCSE or less is only 7 points. Only among those whose highest qualification is less than a degree but more than a GCSE is there a substantial age difference. Even so, at 30 points, it is less than the gap within all of our age groups between graduates and those with a GCSE or less.

They come to same conclusion using regarding social class not being able to just explain away education here. (Quotes and figures on that omitted by me here; see table 3 in paper.)

The degree of shift in Leave opinion stratified by education is also interesting in the year before the referendum, with a large boost in the least educated segment. Also, people who held libertarian (including pro-immigration) views were least influenced by the Leave campaign. 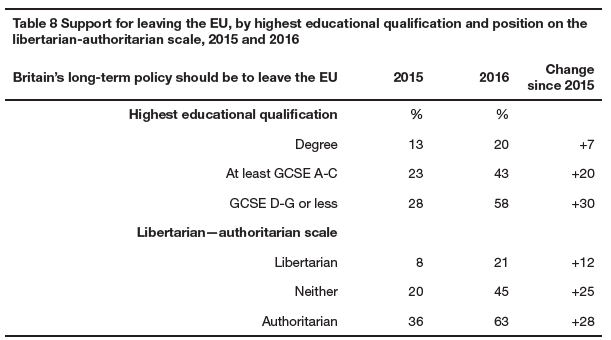 Remember that correlation doesn’t mean causation. In other words, the tendency to vote Remain may not be a result of being educated. It is very possible that another factor causes education and the Remain vote to move together.

Here is an example of what such other factor could look like. Educated people typically find jobs in corporations and live in cities. In such places, they are bound to come in contact with people from other countries. Thus, for many educated people, living together with immigrants may be a natural way of life, which leads to the tendency to vote Remain.

On the other hand, smaller towns and villages may be populated by people who didn’t have the chance to pursue higher education. At the same time, since immigrants tend to be in cities for employment reasons, people in smaller towns and villages do not form the same attitude towards immigrants (fear of the unknown?) as those in cities. Hence, the tendency to vote Leave.

Assuming the above reasoning is correct, being educated has no bearing on the Remain/Leave vote. Rather, the fact that educated people have more opportunities to get in contact with immigrants would cause them to vote Remain. 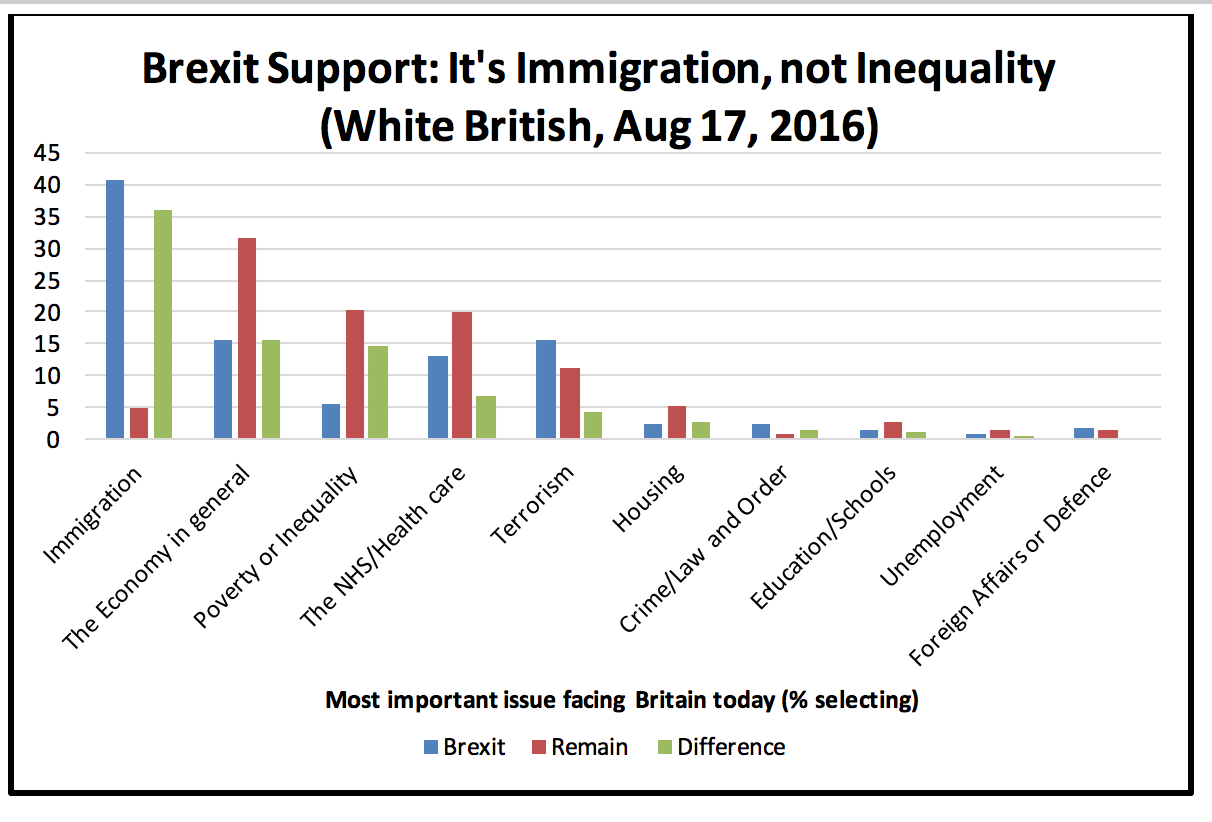 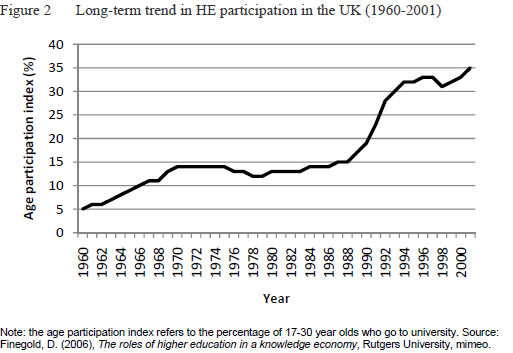 Nevertheless, age and education are independent factors, at least for older generations:

It would be nice to go on line: smarter people see serious stumbling blocs in the whole project - Irish border has to be kept open to maintain Good Friday Agreement and be kept closed, to maintain regulations of World Trade Organisations. Even people who personally detest the EU, may under such circumstances still prefer remain. However there is one big caveat, when using education as proxy of intelligence when comparing different generations. There used to be nice Flynn effect - thanks more schooling and better nutrition people were scoring so well on IQ tests, that next generations regularly needed harder question. Nevertheless, in recent years this effect stopped or even started to reverse, so if we brutally look at the data - new generations seem to no longer get smarter in any measurable way, but merely spend more time in schools.

As extra problem there is issue of cosmopolitan cities. And paradoxically, I'd consider this as good hint: except some clear economic issues (migrants, free trade) people vote to big extend based on their feelings and opinion of their surroundings. Thus people with different surroundings would lean towards particular views, which among their friends seem as good.

Old, less-educated, rural, settled-with-a-family manufacturing workers have the worst prospects in an economy that includes many Eastern European countries willing to do that kind of labor for less money, and they're also the least likely to submit to additional education, moving location, and tolerate other cultures than their own.

People with greater social and economic flexibility such as the young, unmarried, urban, cosmopolitan, well-educated workers are both less likely to be negatively impacted by cheap labor in other EU countries, and are more able to adapt to any issues they come across.

So it's a double-whammy against those with less education. They are more affected by cheap manufacturing elsewhere than higher-educated people, and are less likely to seek out new careers/new places in order to overcome those obstacles.

The question appears to be a form of "Remainers are clever and Leavers are stupid".

It's a particularly questionable & divisive narrative pushed by remainers (reminscent of 19th century pseudoscience about ethnicity and intelligence), it belies the core problem with the EU. link. People in poorer areas tended to vote leave, and also tend to vote Labour, and also tend to be ethnically autochthonous. For the EU to be considered by them to be attractive, it would have to provide them with increased prosperity & opportunity, when in fact it has brought increased competition, and higher cost of living, whilst benefiting middle classes, who tend to support remain.

Prior to eastern european accession there was lower unemployment for young people starting their careers, because there was lower competition for low skilled jobs. The inferred argument that people vote leave because they are stupid, and people that vote remain are clever, conceals the economic reality that people born into middle class families are born with a headstart when it comes to accessing higher education, partly because of having more money, and partly because their parents are usually more educated and aware of the system. Further, higher education is censorious towards leavers.

...the preponderance of wealthy left-liberal people (i.e.: "toffs") in universities is much higher than not, and there is an element of self-selection and of exclusion of those with different world views. It is risky for your career in academia to overtly support leave or UKIP, and I have witnessed that first-hand. It is a domain of political groupthink, that has an political and economic voice louder than it's numbers. The poor, i.e.: "the stupid" (because, obviously only stupid people choose to be poor), are excluded to ensure that the narrative that leavers are stupid remains unchallenged.

There are some detailed analyses of data on this question that concludes:

Not the answer you're looking for? Browse other questions tagged united-kingdom brexit education .

16
In the U.S., are people with more education more likely to vote liberal?
1
Where can I find a chart of education level by political party?

16
In the U.S., are people with more education more likely to vote liberal?
0
Are there proven private elementary educational alternatives to the public model?
12
Does the UK electorate become more likely to vote conservative with age?
9
What's Rees-Mogg's constituency, socioeconomically?
66
Why can't Northern Ireland just have a stay/leave referendum?
4
Is there a law that makes a higher than 50% result on referendum binding?
10
Can a 'Second Referendum' on Brexit contain three options?
13
Is there any hard data on what factors motivated voters to switch from Labour to Conservative in the 2019 election?
18
Why did a decent number of London constituencies vote to Leave?
6
How did the Asians vote in the "double digit" Asian-minority areas in the Brexit referendum?