Did the ERG leadership comment on the deal agreed by Johnson with the EU?

I think most other significant parties (Labour, SNP, LibDems, DUP) have taken a stance on the Johnson-EU deal, rejecting it.

Of note however is that 18 Labor MPs have vowed to defect (i.e. support the deal) in a letter they sent to the EU.

So the big unknowns remaining in the UK Parliament are whether the 21 "independent" (i.e. recently expelled Tories) will support it, as well as the big kahuna, the ERG. It's probably too laborious to account here for the independents' position, so I just want to ask: has the ERG leadership, e.g. Steve Baker, made any comments on the Johnson-EU deal?

The ERG seems to be internally split or undecided for now. The Guardian headlines:

'It's painful to choose': ERG locked in internal talks over Brexit deal

The group, known as “the Spartans”, had indicated they would take a lead from the Democratic Unionist party, which categorically said it would vote against Johnson’s deal. But several of the Tory hardliners – from Peter Bone to Andrew Bridgen – suggested they were likely to vote for the agreement.

It was not unanimous, however, as the European Research Group’s steering committee, made up of senior MPs and former ministers, met on Thursday for a “deep discussion” about the new agreement, which they went through line by line.

“There were a lot of mixed views. This vote will cause some agony for some members, but it will be up to each member’s conscience,” said a source.

Particular sticking points included the role of the European courts of justice in solving disputes – “Why can’t it be the supreme court?” said one member – and the failure to give the DUP a veto.

“We have stood with the DUP for so long that for some members it will be painful to choose,” said another.

But even some of the most fervent Brexiters, including Steve Baker and Mark Francois, made positive noises about the settlement, saying there were “limited remaining concerns”. Owen Paterson, the former Northern Ireland secretary and another hardliner, also did not rule out backing it. [...]

The ERG will hold an emergency meeting on Saturday morning before going to the chamber for the vote.

Also intreresting news in there about the expelled Torrries:

Some of the other former Conservatives who lost the whip were anxious not to be rushed into voting for a hard deal without proper scrutiny. There were also worries that voting for a deal could open the door to the Eurosceptics backing out at a later date, when the withdrawal agreement returns for a second reading, to cause a no-deal crash-out on 31 October. To mitigate the risk of this, there was talk on Thursday night of a cross-party amendment to force Johnson into a Brexit extension if the withdrawal agreement bill was voted down at a later stage in order to wreck it.

Not a comment in the traditional sense where we have a deal and subsequently a comment is made about that deal. Still, there have been events that could be construed as a comment on the deal if we let go of the chronology of those events.

For the purpose of events, let's note that the new deal under PM Johnson is different from the May deal mostly as it relates to the arrangements regarding Northern Ireland.

Let's start with the ERG's position which is codified in section 55 of the Taxation (Cross-border Trade) Act 2018:

This relates to the ERG because this section was proposed by the ERG. From tax.org.uk:

New clause 37 (European Research Group, lead sponsor Laurence Robertson) was agreed without a vote. This would make it unlawful for the government to enter into arrangements under which Northern Ireland forms part of a separate customs territory to Great Britain.

Whether or not this applies to the new deal is part of a legal bid, not from the ERG but a challenge by anti-Brexit campaigners, as reported by the BBC:

Anti-Brexit campaigners have launched a legal bid to stop the UK government from passing its proposed EU withdrawal agreement.

And with respect to the argument above (same BBC article, recommend reading it in full to get more familiar with the arguments):

Under the current law, Section 55 of the Taxation (Cross-border Trade) Act 2018 prevents Northern Ireland from having different customs rules than the rest of the UK.

This is purportedly to "uphold the constitutional integrity of the United Kingdom and safeguard the Union for the future", according to a government briefing on the Bill.

After details emerged of the Brexit deal, Mr Maugham said: "We do not understand how the government might have come to negotiate a withdrawal agreement in terms that breach amendments tabled by its own European Research Group.

"Unless and until Section 55 is repealed by the UK Parliament, it is simply not open, as a matter of law, for the United Kingdom to enter into such an agreement.

Just to add to the article raised in JJJ's answer, it seems like more ERG other Tory holdouts are getting behind Johnson's deal this morning.

Andrew Bridgen, a leading member of the European Research Group:

I think the vast majority of the ERG will come to the conclusion that this deal is tolerable. What we don’t want is a second referendum.

John Baron (not ERG, but voted down May's deal each time):

The reason I am inclined to vote for this one is very simple; Theresa May’s backstop could have had us locked into that arrangement indefinitely. Boris Johnson has torn up that backstop, which means that if the trade talks are not successful after we hopefully agree the deal tomorrow here, then we could leave on no-deal terms. And the reason that’s important is that, by leaving no deal on the table, it makes a good trade deal in those negotiations up to December 2020 more likely to succeed.

I can’t speak for everybody, but my sense of it is that the momentum is with the prime minister on this.

Steve Baker is shamelessly keeping the media guessing seems to have gotten behind it:

“The advice I gave to my Eurosceptic colleagues is we should, number one, back the deal,” he said. “Number two, vote for the legislation all the way through unless, it has to be said, it was wrecked by opponents, in which case we would have to take a view.

Also, it appears that more than 9 Labour MPs will vote for the deal. It's increasingly looking like the good case (2nd) scenario sketched out in this tweet: 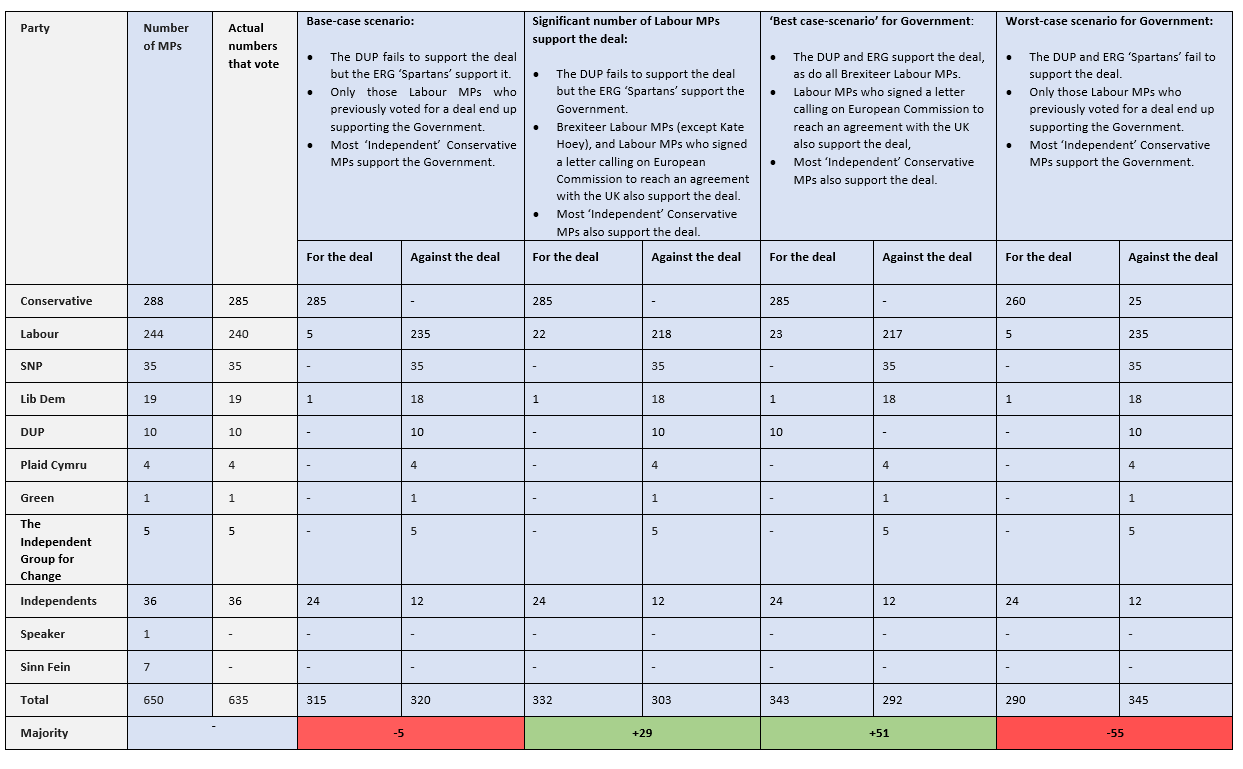 If there are 9 Labour votes indeed, and going with the base case scenario outlined in the above chart, the deal would make it to the finish line if all but one MP in the "Spartan" group back it.

The European Research Group met this morning. Normally, our meetings are private, but in the circumstances, there were three things that I thought I could share with the House. First, the officers overwhelmingly recommended backing the Prime Minister’s deal. Secondly, the ERG overwhelmingly recommended the same and no member of the ERG spoke against it. Thirdly, and most importantly, we agreed that those who vote for the deal vote for the Bill. If the deal is passed today, we will faithfully vote the Bill through to the end, so that we can leave the European Union. You have our word.

Not the answer you're looking for? Browse other questions tagged united-kingdom brexit conservative-party .

2
Can the UK make a no-deal "real Brexit" next year, even if the Johnson-EU deal is approved (by all involved)?

14
Does the Brexit deal have to be agreed by both Houses?
0
Why is Andrea Leadsom so unpopular in the 2019 Conservative leadership contest?
3
What do Tory leadership candidates hope to gain by saying they will renegotiate the Withdrawal Agreement?
18
What did Boris Johnson mean when he said "extra 34 billion going into the NHS"
9
How important is the DUP support (at the moment) to the current ruling party in UK?
2
Can the UK make a no-deal "real Brexit" next year, even if the Johnson-EU deal is approved (by all involved)?
3
Can Johnson safely ignore the Benn Act assuming his deal passes next week?
39
Why does Boris Johnson seek to renegotiate the Brexit deal with the EU?