Why did eastern B.C. and Canadian Prairies largely vote Conservative in Oct. 2019?

Notice that those few Liberal ridings have large urban areas like Edmonton and Winnipeg (Calgary is of course an exception, and still very Conservative). 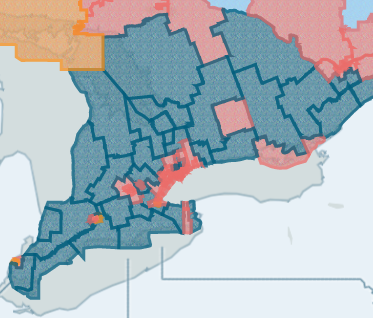 The blue Conservative areas match low population density areas, mostly agricultural with small towns. I think Barrie is the only city with over 100,000 population to go Conservative, and that could simply be because they personally liked their incumbent.

The more isolated people are, the more independent they are, and the less they want government intervention. For them, socialism means higher taxes, not better service. Except when the Conservative party is especially off track and alienating their supporters, it's natural that they would vote the way they do.

The answer by Ray Butterowrth is correct, and I gave that answer an up-vote. However, there are lots of nuances to it.

For example, contributing factors for Toronto going liberal include a combination of hatred for Doug Ford, reminiscence over various figures in the recent political history such as Jack Layton, and strategic voting on the part of the NDP voters.

Doug Ford, the conservative prov. premiere, has a long history of annoying the more liberal or socialist leaning folk in Toronto. This has roots at least as far back as when Rob Ford, Doug's brother, was mayor of Toronto. So there is a significant feeling that anything connected with Doug Ford must be defeated.

Jack Layton was a highly popular NPD figure in Toronto. There is a lot of fondness for his memory. It produces a lot of loyalty to his party, quite outside of and even in contradiction to ideology.

A big thing in the Alberta and Saskatchewan is the ongoing struggle to decide what to do with and about oil produced there. Other resources as well such as wheat and lumber. This is at least as old as Pierre Trudeau, the father of our current PM. Various issues such as where pipelines are permitted, who has to pay how much for using them, what resources belong to who, and how much tax will be paid, among many other issues, have embittered relations between Ottawa and the Prairies for a very long time.

There are lots of other factors that tend to produce a divided country. For example, a quick glance at the map in the question would allow you to be fairly accurate as to guessing what regions are predominantly controlled by natives. They tend to strongly favor liberal or NDP candidates. This is a big part of the orange and red in the north and in BC. And Quebec is solidly Bloc Quebec, the dark green shade in the map. These groups all have separatist and cultural/language isolation issues that unite them and set them apart from the rest of the country.

This election is potentially troublesome for Canada. It's a deeply divided nation at the moment. Those different colored regions have some strong feelings of resentment and frustration. 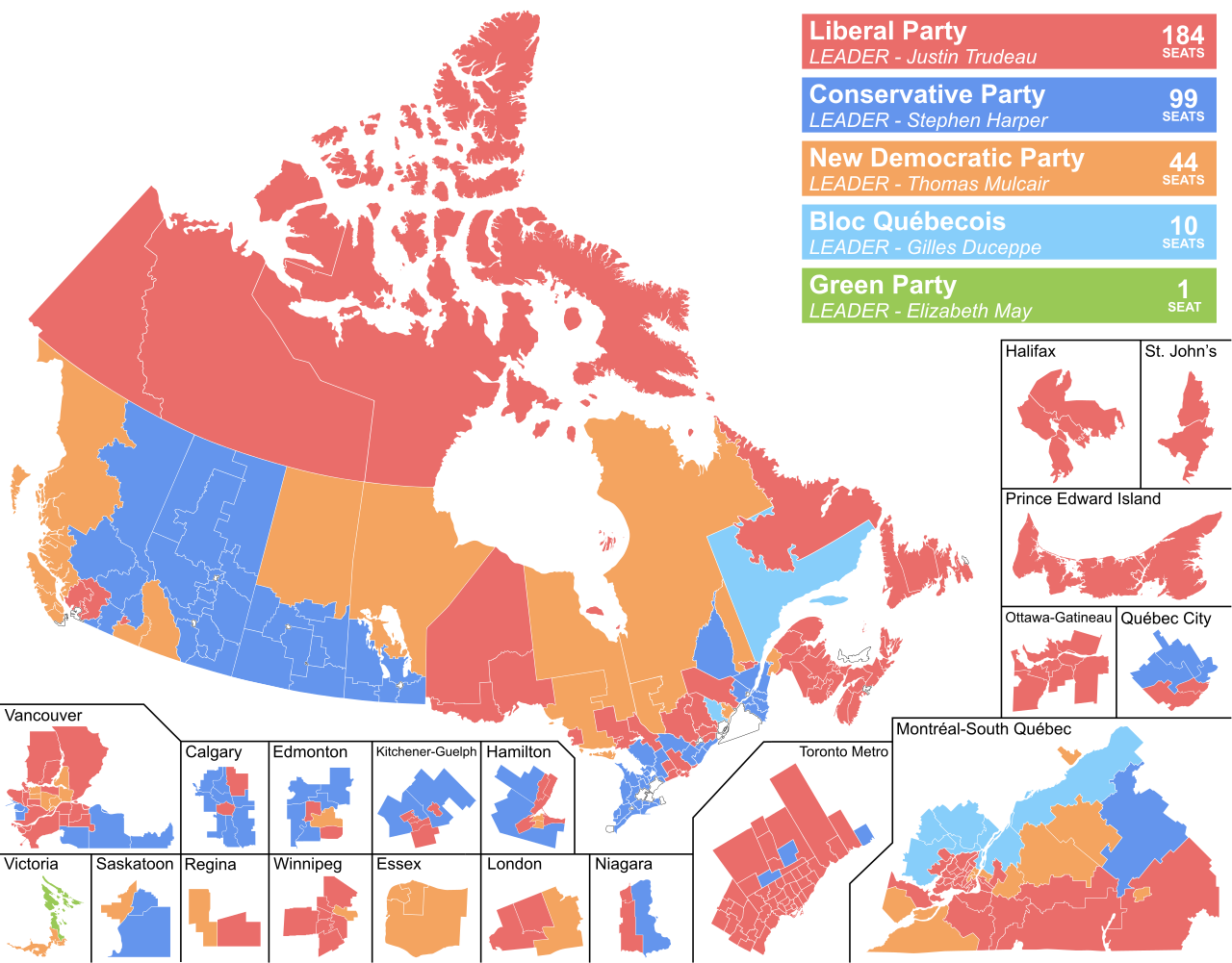 If you compare this map to yours, you will notice that in eastern BC and the praries most seats were Conservative holds. Anther map from Wikipedia, which I will only link rather than upload in the interest of space, shows how most of those Conservative holds have a strong Conservative majority especially those in Alberta. Those that swung to Conservative almost invariably showed a very weak lead in the 2015 elections (I didn’t check all). This is most prominent (because it is a large constituency) for the northern Saskatchewan seat that Conservatives gained from the New Democratic Party.

All things considered, I think the best answer to your question is: they voted Conservative in 2019 because they did so before and saw no reason to swing away.

44
Why do Americans vote on coroners, magistrates, school directors, and tax collectors?
17
In 2016, why did the GOP win the House popular vote while Clinton won the popular vote?
2
Why do so many people in the US vote for different parties for the House and the Senate?
2
Why not combine a high electoral threshold with proportional representation and transferable vote to achieve stable governments without wasted votes?
0
Why is Andrea Leadsom so unpopular in the 2019 Conservative leadership contest?
4
What difference did the Brexit Party's decision to stand down in Conservative seats make to the result of the 2019 General Election?
58
Why are American elections and politics receiving so much coverage in Canadian and European media?
28
How did Alaska "change its primary system recently" and was it "to dilute the possibility of a conservative or Trump-inspired challenger"?
1
Why would Canadian Green party members be highly supportive of the Freedom Convoy's demands to drop covid restrictions?