Are there some (more) polls on the public approval (or lack thereof) for US presidents playing golf?

Bill Clinton had a pollster figure out how Americans would react if he played golf on vacation (the game didn't poll as well as hiking in the mountains; Clinton played golf anyway).

Are there similar polls conducted more recently? How "cool" is for presidents to play golf, according to the public opinion? Did this change over time?

Public: it's unfair to criticize a president for playing golf, August 26, 2014.

Voters are reluctant to jump on board with the golfing criticism, at least in principle. 54% of Americans say it is unfair to criticize presidents for playing golf, against only 31% who say the criticism is fair. Most Democrats and half of independents call the golfing criticism unfair, along with a sizeable (32%) minority of Republicans. 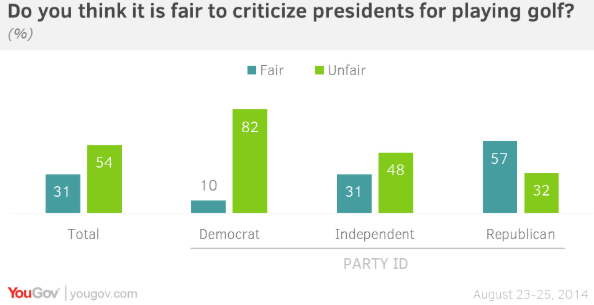 Note that this poll was 2014, during President Obama's second term.

The people who think it's inappropriate for the current president to play golf are likely to be cool with it when it's their guy in office and at least two Presidents (Kennedy and Trump) both were critical of their predecessor's amount of golf, only for them to play some rounds upon taking office. Kennedy did try to hide it, but "the guy who was President before me played too much" ranks as one of the rare things they would probably have agreed on.

Closer to center, most Americans recognize that the White House these days is a really fancy jail cell someone and his family in for the crime of being elected to lead the nation, so they tend to be a bit more understanding that the current President can get Cabin Fever from the security restrictions on his movement and that the job is really stressful and the President looks physically less healthy on exit then on entry (Obama was not grey haired when he took office on 1/20/09, but come 1/20/17 he had gone straight past grey to white haired.) and that even on vacation, the President is still surrounded by security and a big red "launch nukes" button. Most people tend to be accommodating to the president having me time from time to time, while in office.

Not the answer you're looking for? Browse other questions tagged united-states president public-opinion public-image .

3
Are there any examples of the President going to war without Congressional approval?
8
Are there any online resources for finding all public officers for a given zip code in the United States?
6
Are there any public opinion polls in the US on them starting military action against Iran?
4
Are there any pre-Brexit-referendum polls on UK electorate preference for a strongman leader?
7
Are meetings between the President and leaders of congress neutrally documented for the public?
6
Are there polls on US public support for a wealth tax?
4
Has there been a significant difference in sympathy for Israel between the public in Ireland and in the UK?
12
Are there more Democrats than Republicans in the United States?
3
What are the dress code rules for the Houses of Congress