Trump Impeachment tallies in the House?

Are there any reliable tallies of those in the House that are supportive of impeachment of President Trump versus those that are not? I imagine most aren't on the public record, but curious if someone or some group has whipped the total even partially?

NYT published a tally on Oct 10, but it may not be exactly on the question you want, i.e. it's on "support for a formal investigation into the president’s actions, which could lead to votes on articles of impeachment" rather than just "impeachment". 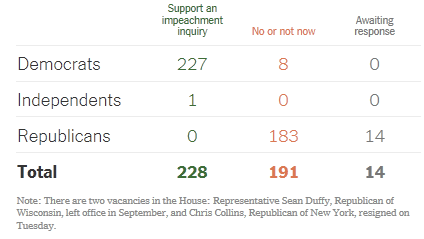 Starting in May, The Times asked every representative for his or her position and has been updating this page with each response. Inclusion in the “support” category does not mean that the member supports impeachment, only that he or she has indicated support for a formal investigation into the president’s actions, which could lead to votes on articles of impeachment.

They have nominal list on that page, but it's obviously too long to reproduce here.

NPR has a more recent one (dated Oct 22) on unconditional support for an "impeachment inquiry":

23
What would happen if vote tallies were discovered to be changed?
1
Could the US House sit on Articles of Impeachment instead of sending them to the Senate?
34
Does the DOJ's declining to investigate the Trump-Zelensky call ruin the basis for impeachment?
8
Can the President refuse a subpoena from a Congressional impeachment hearing?
75
Is it true that “Trump did not have a serious opportunity to offer his side of the story” in the House impeachment proceedings?
6
Could a delayed impeachment trial cause Trump to be removed from office in his second term?
0
Can the House Democrats still call witnesses/can Bolton still testify?
18
Grey area of “impeachment”