Have supporters of "right-wing populist" parties in Europe explained why they trust Trump?

According to a Pew survey/study, supporters of "right-wing populist" parties (by which they mean e.g. UKIP, FN of France, Northern League in Italy, or AfD in Germany) have more confidence in Trump to "do the right thing regarding world affairs" compared to average person from the same European country (of that party). 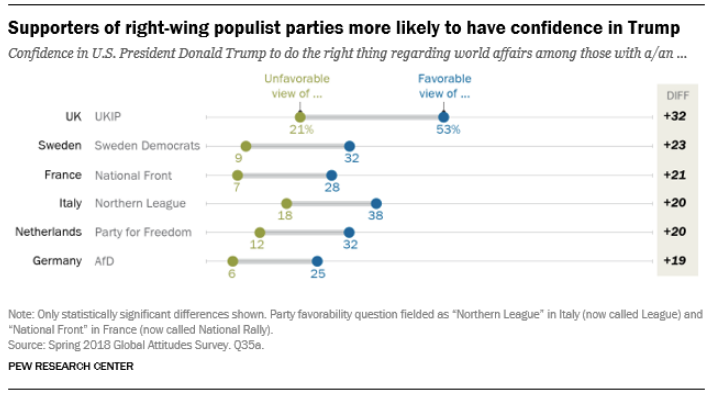 Given Trump's "America first" policy (or at least slogan), why would supporters of nationalistic parties in Europe trust Trump to "do the right thing regarding world affairs" (more than other Europeans do)? Are there any surveys or at least qualitative studies (like interviews etc.) among supporters of "right-wing populist" parties (as defined above) which shed any light on the reasons for this confidence?

(I can see UKIP being a special case here due to Trump promising post-Brexit trade deals with the UK etc. But what about the "right-wing populist" parties in the rest of the EU?)

I think that you are looking at too much rational level concerning people's reaction. Look a bit more at ideology:

In addition to shared views and media effects, you should consider elite cueing: mass opinions are affected by the views of national (party) elites. There is quite some academic (also empirical) literature about it, e.g. here https://rubenson.org/wp-content/uploads/2019/11/merkley-stecula.pdf (US) or here https://www.sciencedirect.com/science/article/pii/S026137941200128X (EU)

5
Why are there so few Islamic parties in Europe?
40
Why are "the rich" more able to identify the party which represent their interests than "the poor"?
46
Why aren't Republicans more focused on mobilizing a movement towards 'dethroning' Trump?
13
What are the contemporary differences between Fianna Fáil and Fine Gael (for the benefit of external observers)?
18
On what dimensions does the current Republican party differ substantially from the right-wing parties in Europe?
33
In general, do European right wing parties oppose abortion?
18
Do far-right parties get a disproportionate amount of media coverage, and why?
6
What distinguishes the Brothers of Italy from other (populist or far) right-wing parties in Italy?