What happens if a country signs mutual defense treaties with several countries who later go to war with each other?

I imagine this must have happened in history (making this perhaps better asked on the History SE), but I can't find any examples, and in that case this is likely the better place to ask. The closest example I found was US involvement in the Falklands war, but that never led anywhere because the US wasn't legally bound to assist either side:

At first glance, it appeared that the US had military treaty obligations to both parties in the war, bound to the UK as a member of the North Atlantic Treaty Organization (NATO) and to Argentina by the Inter-American Treaty of Reciprocal Assistance (the "Rio Pact"). However, the North Atlantic Treaty only obliges the signatories to give support if the attack occurs in Europe or North America north of the Tropic of Cancer, and the Rio Pact only obliges the US to intervene if one of the adherents to the treaty is attacked—the UK never attacked Argentina.

Very smart people are still trying to figure this out.

Perhaps surprisingly, this is far from resolved, and is currently an ongoing topic of rigourous legal and political discussion.

A good starting point might be Valentin Jeutner's book Irresolvable Norm Conflicts in International Law, based on his doctoral thesis defended at Cambridge University in 2015, which is the latest in a recent series of monographs that address norm conflicts in international law.

A fairly-involved review of the book discusses this specific topic and its current unresolvedness:

The court will need to exercise an interpretatory function, and the interpretation will probably hinge upon the concrete question submitted to it. Therefore, it might not actually come to interpret obligations that are in conflict with each other. In order for a court to issue a dilemmatic declaration in the sense that Jeutner proposes, it would need to be the state facing the conflicting obligations to submit the conflict to the court. This seems rather unlikely in contentious proceedings.

Most mutual defense treaties are very explicitly defense treaties. They cover the case where a third nation attacks one or both of the signatories. It is rather difficult for two countries to attack each other first. So the country which has a treaty with both has to see who was attacked and who did the attacking.

For historical perspective, look at the various clashes between Greece and Turkey, both NATO members.

Of course there might be cases where a "defense" treaty also covers offensive action. While this example concerns just two parties, the relatively unconditional Imperial German support for Austria-Hungary is one of the contributing factors for the start of WWI.

In your situation, assuming de-escalation didn't work, the country in the middle would do one thing, and one thing only: whatever is in their best interest.

The main signpost that helps political realism to find it's way through the landscape of international politics is the concept of interest defined in terms of power.

This could mean taking no side, taking a side that has longer upside potential, selling arms to both, or any myriad of policy positions. But these positions will not be based upon whatever is stated in some treaty.

All quotes from Politics Among Nations, Hans Morgenthau, sixth edition

A decision to adhere to a treaty is always a political decision.

Therefore each country decides if it will follow up with its treaty obligations when it believes it is in its interests to do so. That's not to say they look only at the short term convenience - most countries don't want to get a reputation for breaking their treaty obligations (though one major country doesn't seem to care at the moment), and there may be punitive repercussions for doing so, but it is about balancing the political effects of following the treaty with the effects of breaking it. If there is a grey area (such as some ambiguity about who attacked who) that often gives countries leeway for deciding whether or not to take action. It depends on the national and international political effects.

tl;dr: The side that wins the war is the one that was in the right.

In order to invoke the defense treaty, the attacking side will claim to be a defender, because they want the third party to be on their side, or at least to remain neutral.

Say the Philippines dress up a small group of operatives in Polish South Korean uniforms to attack a Philippine radio station. They then claim to have been attacked, and start continue the war in self defense.

Let's assume the US ends up joining the Philippines.

If they end up winning the war, they will make South Korea claim responsibility for the original attack on the radio station, and all is well.

If they lose the war, South Korea will make the Philippines claim responsibility for the attack and demand some kind of reparations from the US for breaking the treaty - the kind of reparations doesn't depend on the wording of the defense treaty as much as it does on the kind of relationship they want to have with the US going forward, and the sum of the military, economic, and political leverage they have. For example they might agree to drop any claims they have in return for the US changing sides mid-war, or they could sink the entire US Navy, invade the US, and instate a puppet government that agrees to pay monetary tribute to the Philippines for 50 years.

If there's a stalemate, everything has to be sorted out in one huge mess.

This question seems to assume that military support is a binary thing and/or that a mutual defense treaty typically has some concrete military responses spelled out, so that only another treaty casts doubt on the response. In reality, mutual defense treaties have ambiguous enough response clauses so there can be many more factors (besides another, conflicting treaty) contributing to variations in [non]response.

To pick a concrete example, NATO's putative response to a possible Russian aggression has often been discussed lately. The following tables from an extensive 2019 RAND report outline these issues: it finds that variation in response from NATO members could be significant, depending on a number of factors, including how they perceive the threat, their domestic political situation, and perceived consequences for [non-]participation: 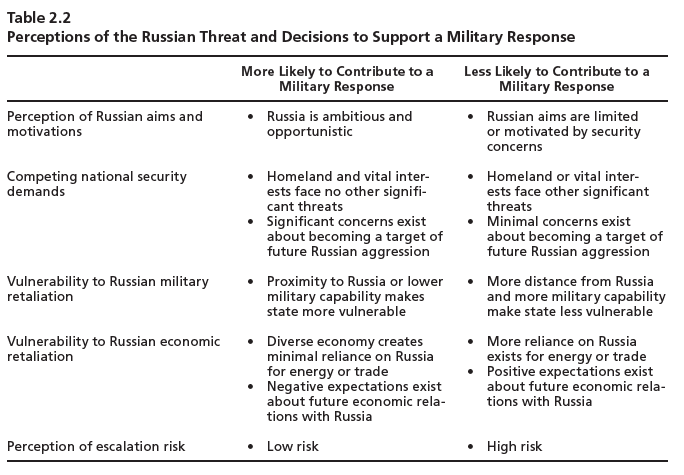 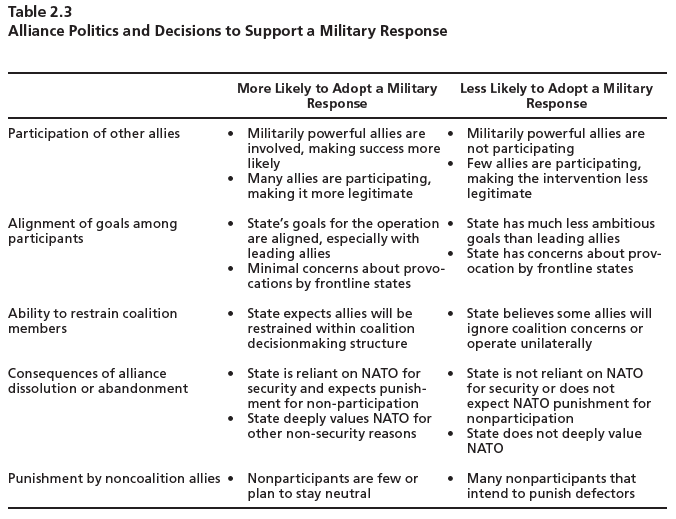 Not the answer you're looking for? Browse other questions tagged armed-conflict .

64
Is Japan still bound by the terms of its surrender in WWII?