Are there any polls in France on further EU expansion in the Balkans?

On October 18, the BBC reported that

At the EU summit, French President Emmanuel Macron led a small number of countries in rejecting the Western Balkan countries from moving forward with their membership bids. He was joined by Denmark and the Netherlands in refusing Albania but France alone rejected North Macedonia. All EU states must agree before approval is given for membership talks to begin.

The French decision to veto the opening of talks with these was criticized even by Juncker as a "historic mistake" even though (in 2014) Juncker had pledged there would be no actual EU expansion during his tenure as Commission president (although Juncker said even then that expansion talks should continue).

On the other hand, the Yellow Vests riots in France sometimes had an anti-EU character. Or at least they translated into a vote for the eurosceptic RN (former FN) in the recent EU elections:

According to an opinion poll by Ifop published two days before the elections, however, 44% of those who supported the Yellow Vest movement said they would vote for the far-right National Rally (RN), with only 4% declaring they’d vote for President Emmanuel Macron’s La République en Marche (LREM).

As for the actual results of those EU elections in France

And Macron couldn't have been completely insensitive to these facts. So, are there some recent polls in France on the [im]popularity of further EU enlargement, and preferably on enlargement in the Balkan countries in particular?

The most recent Eurobarometer survey from 2018 gives the following results for overall public support for EU expansion:

As you can see, France is near the bottom, with only 31% support (the link above splits this down further by age and eduction).

Additionally, this summary of a pan-European citizen survey, carried out in the summer of 2017 in 15 EU states, gives the following results for the question:

“The EU should continue to let more countries become members, under the condition that they meet all of EU’s membership requirements” 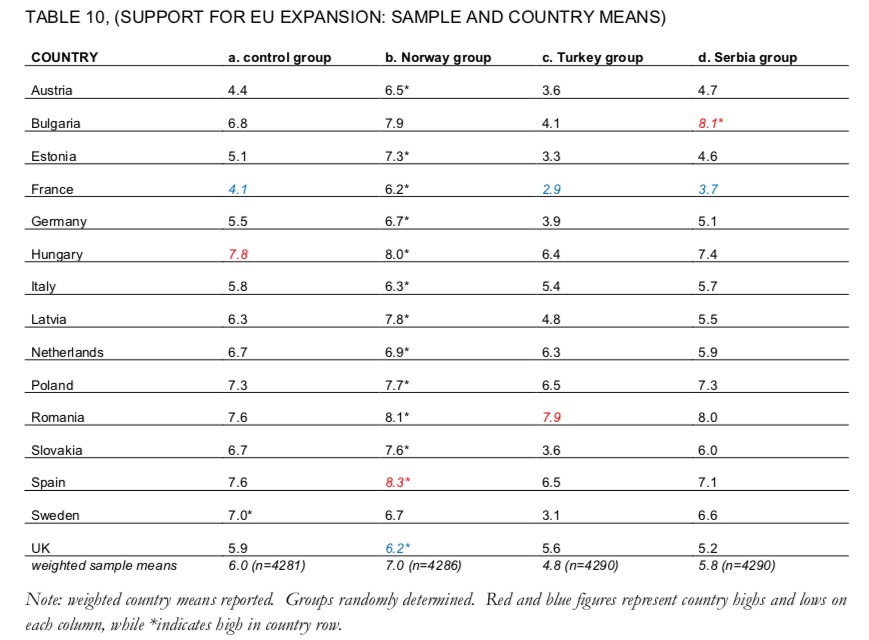 The second through fourth columns use variants of the question that mention a specific country, as in:

“The EU should continue to let more countries become members, SUCH AS SERBIA, under the condition that they meet all of EU’s membership requirements”

As you can see, apart from on the Norway variant, France scores the lowest of all the surveyed countries, with only 37% supporting the Serbia variant.

Not the answer you're looking for? Browse other questions tagged european-union public-opinion france macedonia albania .

5
Is intra-EU movement/migration of EU/EUAA citizens a sizeable contributor to illegal work?

8
Why is there so much worry about France potentially leaving the EU?
0
How can a government untie the "Gordian Knot" of public sector reformation?
2
Is there any evaluation of solidarity tax impact in France?
8
Are there any polls on how the Civil Service feels about Brexit?
8
Are there any polls on the new Swiss immigration referendum question?
5
Is intra-EU movement/migration of EU/EUAA citizens a sizeable contributor to illegal work?
13
Are there any polls explicitly measuring "quarantine fatigue" in Western countries?
4
What mechanisms are available to seek compensation from the UK in relation to Brexit-related disputes?