Are there polls on US public support for a wealth tax?

Various Democratic candidates, including Warren and Sanders have proposed a wealth tax.

Details differ between these plans, of course, but are there any polls on US public acceptance of a wealth tax as a general idea? Is the opinion split on partisan lines, even intra-Democratic lines, e.g. do Biden supporters (never mind Republicans) oppose a wealth tax altogether (and just in principle)?

The wealth tax is very popular according to a Hill-HarrisX Poll, conducted in Feb of 2019.

A new poll is finding broad support for an annual wealth tax on people with assets of at least $50 million, underlining support for taxing the rich.

The poll showed support for the idea among people of all ages and races and from both political parties.

are there any polls on US public acceptance of a wealth tax as a general idea?

As a general idea, the US public is in favor of wealthy individuals paying more in taxes -- which I think is indirect support for a wealth tax. But this is a complex subject, and it depends on if the idea is presented as a redistribution or paying "their fair share." (And I think that's an important point to keep in mind when discussing reasons why a wealth tax might be implemented. For this, and further reading not directly related to this question, such as (constitutional) challenges to implementation, I would recommend this 1977 paper, "Do We Want a Wealth Tax in America?" and this paper available on SSRN "How to Tax the Rich")

Let me start with a Gallup article from 2016. A question first asked in 1939 shows wealth redistribution was not popular until around the turn of the century. 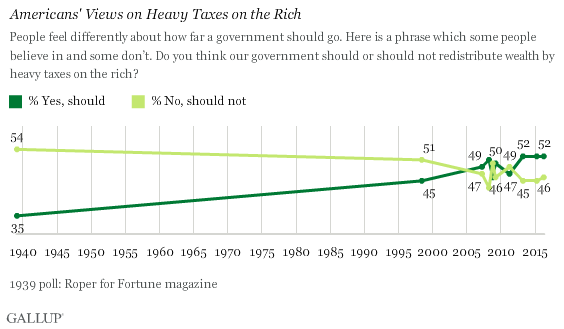 But looking at the question of whether or not the wealthy pay the fair share of taxes, this has consistently seen a majority of people responding the wealthy pay "too little" in taxes. 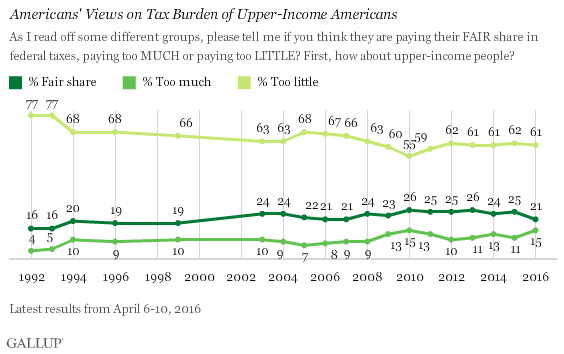 Pew has some polls on similar questions, with partisan breakdowns. An article from 2011 has the subtitle "Wealthy Not Paying Fair Share Top Complaint"

Numbers for that question 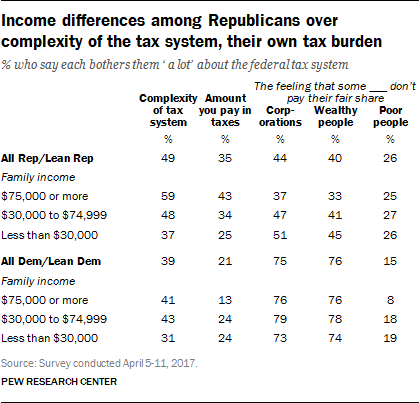 Now, one final thing to note. This idea of the wealth tax and taxing the wealthy is something, I think, everyone is aware of and a majority support. However, it seems this is a relatively unimportant issue compared to other things. I base this on a Gallup poll from July 2019 which says

Between 0% and 2% of Americans have mentioned inequality as the nation's top problem across the seven months of 2019 so far. Certainly this is not a significant top-of-mind concern for Americans and no more of a concern now than it has been in the past.

23
Why not have a wealth dependent income tax?
3
Would a wealth tax be constitutional?
8
Does tax amnesty have any benefit except for potentially uncovering undeclared wealth?
8
What are the arguments for and against a flat income tax rate?
47
Why aren't Republicans more focused on mobilizing a movement towards 'dethroning' Trump?
2
Do polls indicate support for post-Brexit freer trade?
6
Are there any public opinion polls in the US on them starting military action against Iran?
2
Are there some (more) polls on the public approval (or lack thereof) for US presidents playing golf?
4
Have any polls been conducted measuring support for the WHO?