Is intra-EU movement/migration of EU/EUAA citizens a sizeable contributor to illegal work?

Are illegal movements of EU citizens in the EU a significant problem? E.g. is there a significant black market for Eastern EU labor in the West, for instance in prostitution, undeclared day labour, and similar? Are there any estimates for the magnitude of these phenomena? Likewise, are there similar estimates for the EU-associated countries like the Ukraine?

N.B. there's some controversy how to even translate what Macron said in French

Macron’s words about “clandestine Bulgaria or Ukrainian networks” with respect to illegal immigration remain somewhat unclear given that as an EU member state Bulgaria’s citizens are entitled to live and work in France. Ukraine has not been recognized as an official EU candidate country but its citizens were granted visa-free travel to the EU back in 2017.

In the previous sentence Macron used a phrase that's probably even harder to translate "travail détaché dissimulé" in a parallel contrast, so he seems to attach this latter form of "dissimulated" work with Bulgarian and Ukrainian networks/gangs:

Note that "travail dissimulé" is a legal term in France roughly translated as "dissimulated [hidden] work", basically undeclared/illegal work. The latter document also says it's most prevalent in entertainment, farming, construction, transportation, and hospitality business[es] in France. However it's not clear from that document if Eastern EU (or EUAA) workers are overrepresented in this "dissimulated work".

Are illegal movements of EU citizens in the EU a significant problem? E.g. is there a significant black market for Eastern EU labor in the West, for instance in prostitution, undeclared day labour, and similar?

Yes, there is such a black market. Whether it's a significant problem is hard to say. These laborers try to stay under the radar, so most reports I've seen are very local, and I will cite such a news report below.

The reason that there may be a black market in the EU for cheap labor is the variety of wages in the EU, consider this image from Wikipedia's Net average monthly salary (adjusted for living costs in PPP): 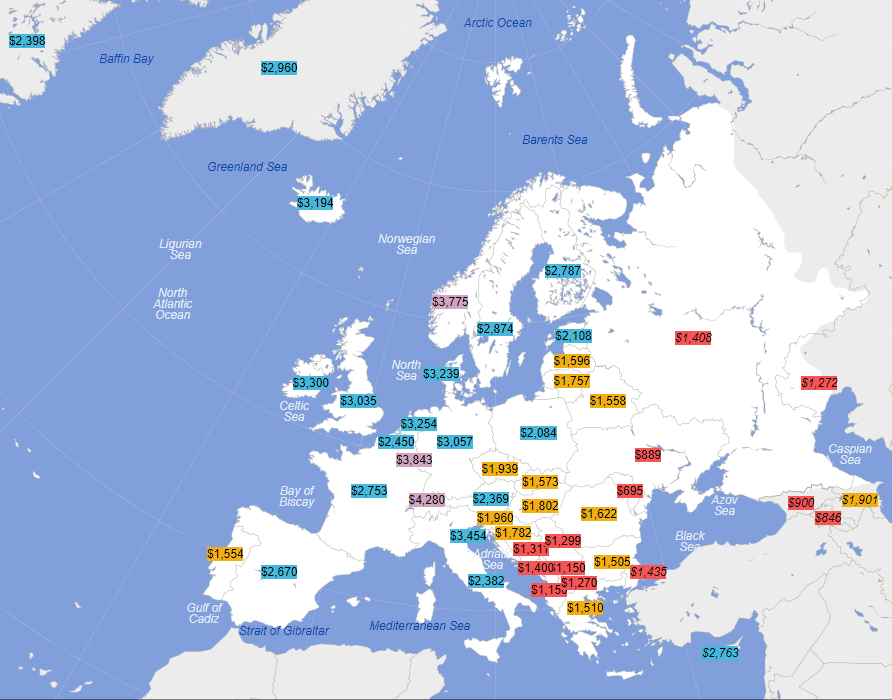 Of course, for the employers there's not necessarily a benefit to foreign workers. After all, these richer countries will have minimum wages so for that price they may as well get a local worker.

So these immigrants can try to work outside the rules to be more appealing to employers. For example, earning less than the minimum wage, living cheaper (non-compliant with local rules), working more hours than allowed, etc. As such, it doesn't really matter if they're EU migrants or not, they're trying to stay under the radar anyway.

In the Netherlands, I've read news reports on this where such immigrants are housed together on campsites or set up tents in the outdoors (both sources in Dutch). That means many people won't notice their presence but it may also a breeding ground for crime.

A roughly translated quote from the first news report:

A Socialist Party councillor who visited the campsite last year described the situation as "sad and almost inhuman". She noted that almost 300 to 400 Eastern European labor migrants sometimes lived in rooms of only 2 by 2 meters which they had to share between two people. According to the councillor, the houses, in which families lived with children were cold, wet, moldy and unsuitable for permanent living.

Of course, these are only a few examples. Given how these situations are described I hope it's clear that these are not centrally registered.

As an example of how difficult centrally registering illegal migrants is and how official figures may not reflect the actual situation I recommend Ross Kemp's recent episode on homelessness in the UK. In the episode, we see that local governments in the UK are often unaware of the number of homeless people in their own cities.

The EU has an extensive report on the illegal employment of "third country nationals", by which I think they mean non-EU citizens. They have this summary breakdown of where most illegally working TCNs come from:

But there's no attempt to contrast it (put in context) with illegal work of EU citizens themselves (including those who travel to another member state).

It's interesting that France was not among the countries that provided such detailed stats on the citizenship of the illegally working TCNs, although France did provide stats for the number of employers and TCN workers sanctioned for illegal employment. France was actually the top EU country in the latter category with 1774 illegally working TCNs identified in 2015.

The study also notes that overall

However, there are no estimates on the extent to which the illegal employment is comprised of TCNs and nationals of the Member State or EU nationals and data should be treated with caution.

There are some numbers for Germany that put the foreign illegal workers in context of illegal work in the country though:

In the first half of 2017, 65,755 investigations into undeclared — illegal — work were started in Germany, a rise of 5 percent over the same period of the previous year, Welt am Sonntag reported, citing a confidential report by the German Customs' Financial Investigation Unit.

Foreign, non-EU, workers found to be working illegally in Germany, recorded as being on "unauthorized stays," increased 28 percent year-on-year to 941 in the same period, according to the report. [...] Most of those working in Germany without a permit come from 10 countries: Ukraine, Albania, Serbia, Vietnam, Bosnia-Herzegovina, Macedonia, Turkey, Kosovo, Moldova and Ghana, it noted.

In some fields like cleaning, baby sitting or gardening, illegal work (though not necessarily that of foreigners) is apparently prevalent in Germany; one estimate was that "somewhere between 75 percent and 83 percent of household workers [were] employed under the table".

Of the 490 million people in Europe, more than 25 are foreign. It is estimated that there are between 5 and 7 million workers without permits in the EU. For them informal work is the only form of subsistence.

But provides no further breakdown of this latter figure. Clearly, there's also a very large gap between such estimates and the number of TCNs identified as working illegally.

Another study also puts the figure in the millions, but toward the lower end of the other estimate:

European experts estimate that 70 per cent of irregular foreigners are employed (Boswell and Straubhaar, 2004). This would suggest up to 2.7 million irregular workers in the EU-27 labour force of 240 million in 2009, based on Clandestino estimates, making only 1.1 per cent of the EU labour force irregular.

Macron may have been obliquely referencing events like those from a month before (which didn't really make it to well-known Western news media) as reported in a Bulgarian source (in English):

The Bulgarian and the French authorities took down a network for human trafficking and labor exploitation. Three Bulgarians and a French national were detained in France. They organized the trafficking of workers near Lyon. 167 illiterate people from Northeast Bulgaria were hired to pick grapes in France. The group was functioning under the camouflage of a legal business. The people hired by a Bulgarian company were posted to France. They signed job contracts with the Bulgarian company in foreign language without knowing the content of the contracts and were promised EUR 60 per day in wages. Most of their money was appropriated by the Bulgarian company. The money laundering happened through business and investments in French real estate properties.

Alas it seems impossible to obtain any statistics on how widespread this phenomenon is regarding even Bulgarian [illegal] workers in France.

As for "travailleur détaché", which I think translates as worker posted abroad, French media covered in 2018 a scandal (that stretched back to 2012) in which some Bulgarian and Romanian companies were sending workers to France but paid them as if they were still working in Bulgaria or Romania, which is/was apparently illegal under EU (and French) law. Again it seems impossible to find any statistics on the magnitude of this kind of problem. (Also, the EU Directive on prohibiting pay below the standards of the host country only dates back to 2014.)

The European Labour Authority which is supposed to monitor these kinds of problems has only been launched in October 2019, and apparently isn't expect to be "fully operational" until 2024 (which I'm not sure what means precisely.) There are however some sectoral reports from Eurofund. One such report, focusing on construction workers notes for instance that

In France, social partners agree to assess the relevance of this fraud, identifying a huge increase of fraudulent forms of posting of workers in recent years. [...]

The misuse of intra-group posting of workers is becoming a relevant fraudulent practice according to national authorities. There is a growing tendency among European companies to post workers within branches of the same company or group. In some cases, the groups concerned have a genuine European dimension –having subsidiaries in various EU MS-: conversely, it may occur that a company based in an EU Member State will work directly with a French client, invoicing for its services through a subsidiary or branch, set up in France with no employees (letter-box companies) [...]

The analysis of the declarations by companies of posting of workers (Ministry of Labour, Commission nationale de lutte contre le travail illégal, “Analyse des déclarations de détachement des entreprises prestataires de services en France en 2015”, September 2016), shows the following trends: the number of declaration filled up on the ground of intra-group mobility has sharply increased since 2011. Furthermore, ‘it is very likely that this volume is only a partial reflection of the intra-group detachment on the national territory, which is certainly under-reported”, stresses the Ministry of Labour.,. The share of such intra-mobility in the total of declarations, increased from 3% in 2012 to 7% in 2015. In 2016, the share of intra-mobility has increased in 2016 by 8,000 declarations.

They also note that France has been trying to combat the phenomenon with its Law 786 ("Loi visant à instituer de nouvelles libertés et de nouvelles protections pour les entreprises et les actifs") (aka the El Khomri law) which (among many other changes) basically made a "Social ID" card compulsory for foreign workers posted to France, although there have been some problems with the implementation of this card system.

The EU rules on pay for posted workers were further tightened in 2018 (going from minimum pay for the host country seemingly to sectorial standards), and the tightened rules will take effect starting from August 2020. So while it may be impossible to get stats how badly abused the system was, it clearly seemed bad enough to elicit some (more) changes. Interestingly, Macron had been pushing hard for this change, even though the number (and even proportion) of posted workers from low-pay countries in France is lower than in Germany.

Not the answer you're looking for? Browse other questions tagged european-union immigration france employment freedom-of-movement .

32
What does European Union “freedom of movement” mean, and how much can individual countries restrict intra-EU immigration?
4
Are there any polls in France on further EU expansion in the Balkans?