Any polls out there indicating the public's pulse on the impeachment? Specifically interested in moderates or independents and swing states.

Nate Silver's website FiveThirtyEight has been collating and adjusting all of the polls related to both starting the impeachment query and conviction.

Support for impeachment is highly dependent on party affiliation with 83% of Democrats in favor, but only 11% of Republicans. Independents are split with 45% supporting it.

More than one press article attributed the October jump (e.g. as seen in in SurpriseDog's answer from cumulative 538 data) to have been caused by independents, e.g. as Reuters reported on Oct 23:

Support for impeachment was relatively steady among Republicans and Democrats over the past week but it surged among independents, a group that includes people who neither identify as Democrats nor Republicans and do not favor either party when they vote.

Among independents, 45% said in the latest poll they supported impeachment and 32% said they opposed it, the strongest level of support recorded in more than a year.

A little more than 1 in 3 independents had said they were in favor of impeachment in more than a dozen previous Reuters/Ipsos polls since June 2018. [...]

Caveat: it was an on-line poll (self-disclosed margin of error 5 percentage points).

However, as @dsollen correctly pointed out in a comment, in the cross-poll 538 data, cross-tabulated by respondent's leaning, the pro-impeachment Democrats appear to have been surging just/almost as much, although a boost from 70% to nearly 85% is not looking like a swing anymore, so it was perhaps less newsworthy. 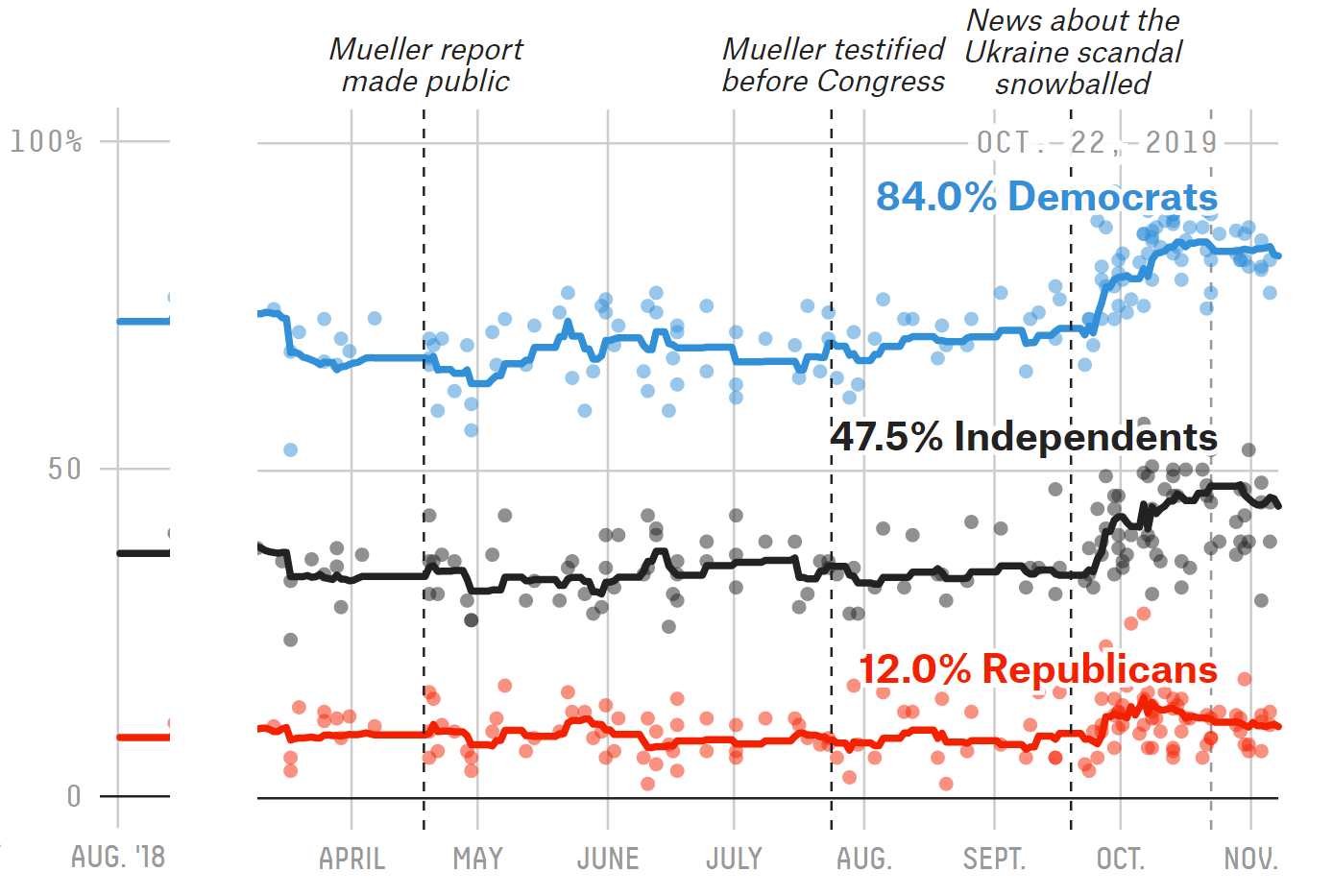 (Note: I've cut out the uneventful part of this graph so there's more zoom on the events. The cursor [highlighted number] was roughly on the peak support for Democrats and independents.)

As for swing states, there was a recent NYT/Siena voting intention poll (covered in the 2nd part of an answer of mine to another question), which probably captures the effect of the [recent] impeachment proceedings as well. Although NYT did not report impeachment data from that poll (at least in the article I found), apparently the raw data, does contain a question or two on impeachment, because the Hill summarized that as

A New York Times–Siena College battlegrounds poll released Wednesday found that majorities in Michigan, North Carolina, Pennsylvania, Wisconsin, Arizona and Florida oppose removing the president from office through impeachment. Majorities or pluralities do support an investigation of Trump, however.

And a Siena page has the raw numbers supporting that: 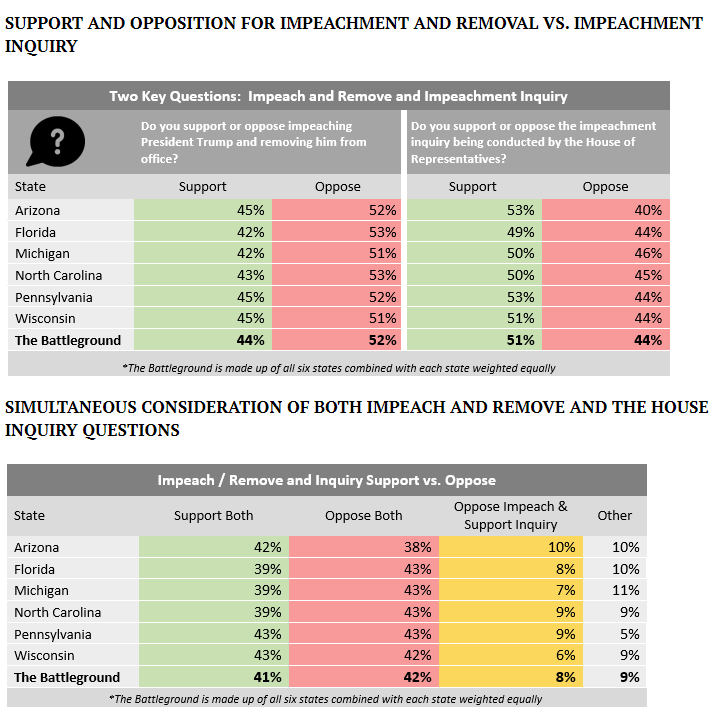 And a Brookings article has even tabulated the impeachment & removal question from the same poll (but not the other one, just on inquiry) by the leaning of the respondent, i.e. you can see what the independents in the battleground states are saying on that: 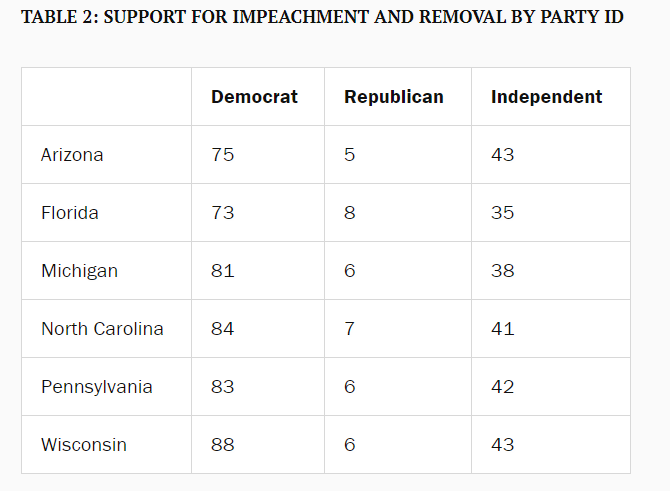 (They also break down that by race, in a subsequent table, if you're curios.)

And they also summarize a related question:

Taking swing states as a whole, 47% of voters believe that President Trump’s actions related to Ukraine as well as to investigating former Vice President Biden and his son are “typical of what politicians do” rather than much worse than that of typical politicians (43%). The share of swing state voters taking this dark view of politics ranges from a low of 42% in Florida to a high of 51% in Arizona.

You may also be interested in a more in-depth ABC/Langer poll (published on Nov 1) that asked some "optics" questions about impeachment, including the public's view on how the Democrats handled it, how the Republicans responded, or even on Giuliani's role. Alas the [publicly reported] result of this poll are mostly not broken down by the usual political-leaning respondent categories. But the Giuliani question happened to be reported so:

Further, 60% say it was inappropriate for Trump to involve his personal lawyer, Rudy Giuliani, in U.S. policy toward Ukraine, with 83% of Democrats saying so and 61% of independents saying so, compared with 32% of Republicans.

20
Was the November 2019 polling about the Democratic Party's lead over Trump trustworthy?

5
Where is the process for Presidential Impeachment codified?
10
Is there polling to suggest that a majority of United Kingdom citizens would favour a codified constitution?
9
Do any Republicans support the impeachment of President Trump, or have they said what it would take for them to support it?
1
Are impeachment hearings having an effect on public opinion?
1
What impact did Clinton's impeachment have on his reelection?
6
Could a delayed impeachment trial cause Trump to be removed from office in his second term?
17
Was the impeachment of Donald Trump supported or opposed by the general public outside the United States?
6
Have any Senators boycotted an impeachment vote?